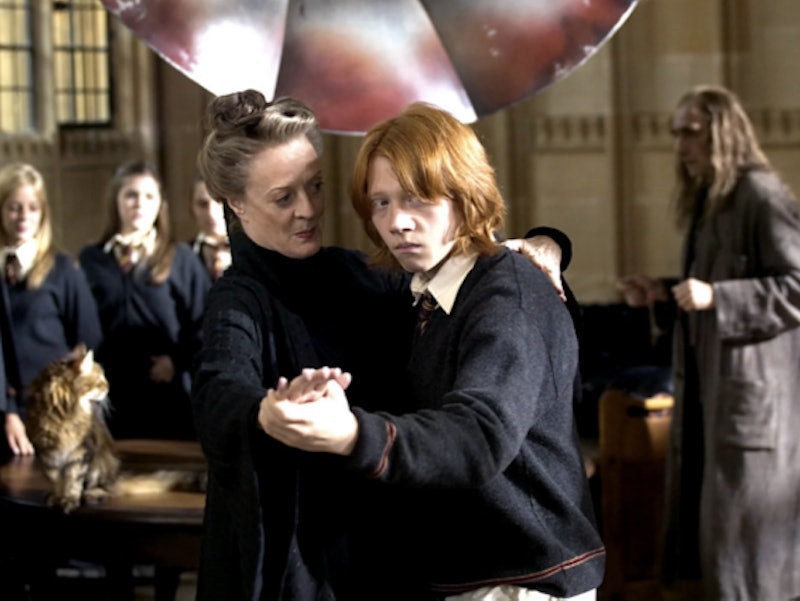 Theater-goers in London finally have the chance to watch Harry Potter And The Cursed Child. Set 19 years after the final Harry Potter book, the new two-part play tells the story of the next generation of children as they go off to school at Hogwarts. Spanning several years, as well as alternate realities, Harry Potter And The Cursed Child is guaranteed to be important viewing for hardcore fans of the series, and has already gotten impressive reviews. The play introduces several new characters and events into the Potter universe, and one such event is the ominously named Blood Ball. So what exactly is the Blood Ball? Call me crazy, but it doesn't sound particularly enticing.

It's impossible to speculate as to what the Blood Ball might be without revealing some plot points of Harry Potter And The Cursed Child . Time-Turners feature prominently in the play, with Harry's son Albus, and Draco's son Scorpius, using one to go back in time to change the events surrounding Cedric Diggory's death. But, when they do, they alter things they didn't set out to change, and the world becomes a much darker place as a result. One such example of darkness is the introduction of the celebration known as Voldemort Day. Another is the Blood Ball. But what exactly happens there?

In the Harry Potter books, an important event in the Hogwarts calendar was the Yule Ball. A Triwizard Tournament tradition, the Yule Ball was held at Christmas, with the winners of the tournament opening the event with the Champions Waltz. There was always a lot of interest in who each other characters was dancing with, and it was ultimately a positive event. The Blood Ball, on the other hand, sounds every bit as dark as Voldemort Day, and the two are perhaps connected.

While exploring an alternate universe in which Harry Potter died at the Battle of Hogwarts and Albus Potter was never born, Scorpius — or Scorpion King as his fellow students appear to call him — is waylaid by Polly Chapman, who informs him that she's open to being his date to the aforementioned Ball:

Shall we cut to it? I know everyone is waiting to know who you're going to ask, because, you know, you need to ask someone and I've been asked by three people already and I know I'm not alone in refusing them all. In case, you know, you were to ask me... [to] The Blood Ball, of course.

The Ball definitely promises to be a dark event, considering the penchant for violence the inhabitants of the alternate reality have. Right after this discussion, Scorpius hears screaming and, when he asks about the source, is told that "Mudbloods" are being tortured in the dungeons — and that this sport was his own idea. If this atrocity is the norm in this world, I'm guessing the Blood Ball is just an incredibly dangerous prom. Any party with "blood" in the title belongs in a horror movie as far as I'm concerned.

As if we needed any further indication that a world without Harry Potter is a completely terrible place, the Blood Ball is a sign that when Voldemort wins, death and decay reign supreme.