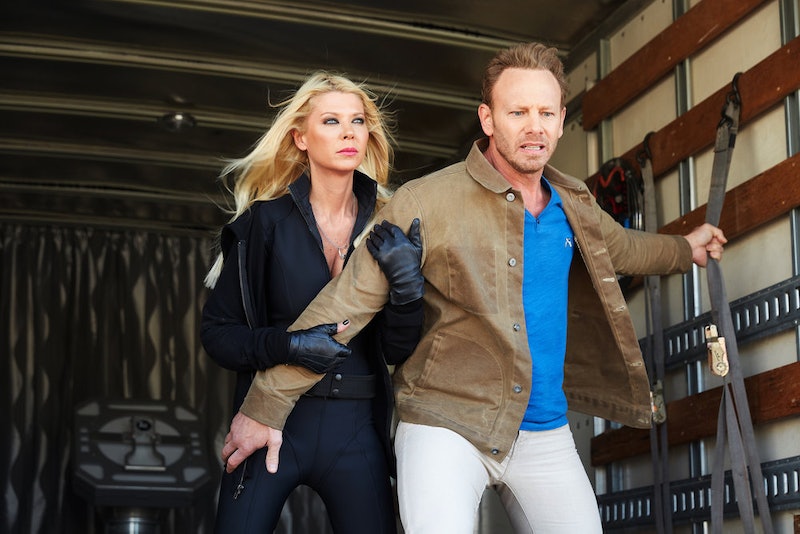 Just when you thought it was safe to go anywhere, really: another shark-infested tornado is touching down on Syfy. Sharknado: The 4th Awakenswill premiere on July 31, which means that fans of the network's schlocky, D-List horror extravaganzas will once again be live-tweeting like mad. Sharknado series stars Tara Reid and Ian Ziering have been fighting the good fight against this toothy weather phenomenon since the first movie. They'll be joined no doubt by a cavalcade of cameo-ing personalities. No spoilers here; seeing who pops up in the midst of this unnatural disaster is half the fun of watching. I haven't seen Sharknado: The 4th Awakens yet, but I can already tell you that — though there will be casualties — the world will definitely be saved. Does that mean that Sharknado 5 is happening? And if so, how long will you have to wait for it?

Syfy has not confirmed Sharknado 5 yet or announced an airdate. Still, it's looking good for the continuation of the franchise. Sharknado: The 4th Awakens got its own panel at this year's San Diego Comic-Con, moderated by director Anthony Ferrante. Ferrante and his cast made reference to more Sharknados throughout the panel. At one point, a fan asked if he should buy each Sharknado DVD individually or hang on and wait for a 20-volume box set. The director indicated that while they have no sign of stopping, fan interest and support is still necessary. Ferrante said:

We need your money to keep making these movies, so I think you should keep buying them as they come out. Otherwise, there might not be another one!

The director and cast also answered a question about their dream cameo get for Sharknado 5 (Clint Eastwood, Meryl Streep, Julia Roberts, etc.) and about doing a movie in the vein of Syfy's showdown series. (Sharknado V. Godzilla, anyone?) While this is all fun speculation on a fan panel, it's telling that there was no hesitation when discussing sequels. And Sharknado screenwriter Thunder Levin told Screenrant this week that he already has an arc in place for the next three movies. Barring some huge downward spiral of Sharknado interest, it certainly looks like Sharknado 5 will be happening. It's just a question of when. And what subtitle could one-up the fourth's timely Star Wars reference.

Since its pop culture debut, a Sharknado movie has graced Syfy's programming once a year. And the production won't likely be slowing down anytime soon. At San Diego Comic-Con, Ferrante also shouted out his actors on the panel for rolling with the breakneck pace of filming these movies.

Studio movies, you have $100 million, you know, 100 days. And we have 15 days to do what they do in that amount of time. We've done three Sharknados and we were filming a fourth between the time Batman V. Superman was in production.

It's a good thing that the shabbiness and audacity of these movies is why they're so beloved. When the effects don't need polishing and the story doesn't have to make much sense, Syfy can continue to churn out Sharknados at a once-a-year pace, with no fear of (I'm so sorry) jumping the shark. So clear your schedule and stretch out your Twitter fingers: Sharknado 5 is probably coming in 2017.