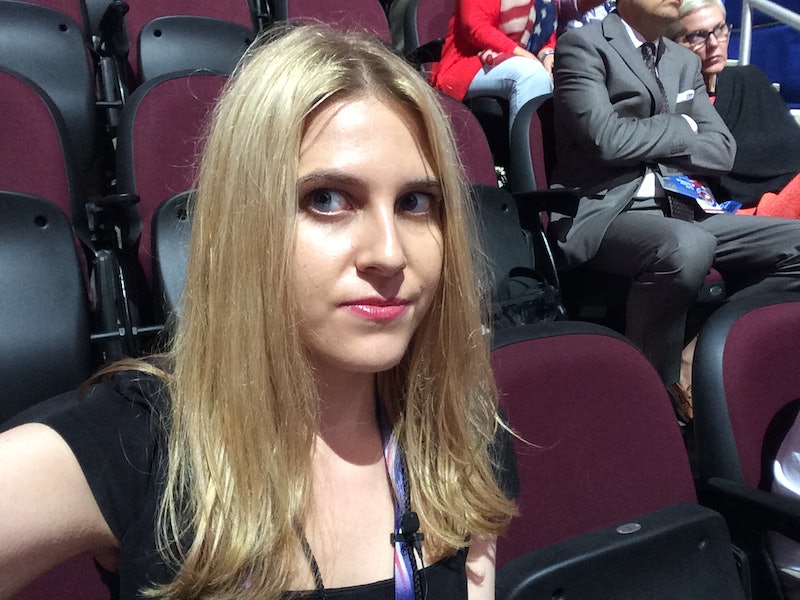 Ostensibly, one attends the Republican and Democratic National Conventions to witness democracy in action — to see the will of the people come to fruition in the formal nomination of a party candidate and watch delegates who have traveled from all over the country gather after rancorous primaries bury the hatchet and celebrate common ideals, values, and goals for the nation. However, neither party's convention quite reflected such a magnanimous and unified sentiment. But that's okay because some of us have an ulterior motive at the conventions: scoping out DNC and RNC celebrities.

I should add the caveat that I am using a pretty wide definition of "celebrity." I'm not necessarily talking about the kind of people who would grace the pages of your favorite tabloid, though the DNC did have some major star wattage, from Demi Lovato to Angela Bassett to Lena Dunham to Meryl Streep. And in all fairness to the RNC, it was able to snag Scott Baio —though as much as I love Happy Days (and Lord knows I do), his presence didn't quite rev my engine compared to catching former Sexiest Man Alive Bradley Cooper in the Wells Fargo stands. But most of the people I count as "convention celebrities," you wouldn't spot at Nobu or The Ivy. I'm speaking for the crowd that goes all fangirl over catching someone who was on Donald Trump's shortlist for VP (Michael Flynn) or a former senator who ran for the Democratic nomination in 1992 (Tom Harkin). And yes, I am part of that crowd.

Now, as I walk into my last convention day, here are a few pearls of wisdom for stalking RNC and DNC celebrities. It's all about striking a balance so you can get a few quotes or a photo, without getting arrested and banned from the convention perimeter.

Be Ballsy. Within Reason.

This piece of advice may seem obvious. Of course, you're going to need some chutzpah to approach a celeb, whether it's in Soho House or the Quicken Loans Arena. You work up your courage and remember that they put on their pants (or pantsuit) one leg at the time. And remember, if you don't at least go up to Anderson Cooper and ask if he'll talk to you, however disappointed you feel when he politely turns you down (which he did at the RNC) it won't compare to the hours of regret you'll feel at not lunging towards Ivanka Trump (that's a joke; I never got even a long-distance eye witness shot of her).

That being said, as important as it is to be ballsy, be tactful. For one, a lot of these elder statesmen are, well, old and jumping in their face and frightening them is probably a bad idea. Some of the convention celebrities have also spent much of their careers fending off crazies. There's probably a reason Planned Parenthood President Cecile Richards has a crew around her at the DNC — perhaps because she advocates for a field where death threats are relatively common. Thus, be bold and brave in approach convention celebs — but, you know, within reason.

Run. Fast. And On Escalators.

Being on the lookout for convention celebs is a little like trying to spot the golden snitch in Quidditch: as soon as it catches your eye, move as fast as you can and forget about everything else. I'm not necessarily proud of this, but I abandoned my colleague, Alexi McCammond, on an escalator in Wells Fargo when I saw Anthony Weiner walk by in a very noticeable pair of red pants. All that was going through my head was "Must interview. Must interview." Weiner didn't disappoint, saying I could interview him as long as I kept up with him (which wasn't easy... he has much longer legs than I do and walks quite briskly). With his trademark no-nonsense, curt tone, he dismissed my questions about the fractured party showing. "This isn't a shoe convention," he told me. "It's not really news that there are people with different ideas here." Even having my question sort of shut down by Weiner was well worth it.

Navigating escalators also was a critical convention celeb-stalking skill in Cleveland with Republicans. I was able to steal a few minutes with Rep. Darrell Issa at the Rock and Roll Hall of Fame after Caitlyn Jenner gave a talk, but it was on the condition that I interview him while he rode the escalator out of the building. As anyone who has walked with me a few blocks knows, balance isn't my strong suit. Still, some small bit of karma and a supporting hand from the congressman kept me from falling in the moment.

Tripping walk on the perfectly flat sidewalk of Bolivar Street hours later made up for it.

If There's A Crowd, It's For A Reason.

I'm not terribly good at actually identifying public figures, a weakness I will elaborate upon in my next point. It's for that reason that whenever I saw a crowd building, I assumed it was a convention celebrity and that I should get my act in gear. Many times, it wasn't a celeb, but, say, a delegate in a rad, personally-designed Michelle and Barack Obama dress.

But sometimes, it was. At the DNC, I got caught in the political equivalent of a mosh pit — so way less cool and fun but still remarkably sweaty and unpleasant in smell— to find that once-considered Democratic VP contender Julian Castro was commanding the crowd. I nuzzled into the center (and absorbed all the scents of people who spent the day in the nearly-100 degree Philly heat) to ask Castro if he was worried that the Hillary Clinton-Tim Kaine ticket lacked diversity. Unsurprisingly, Castro stressed party unity and dismissed any concerns, telling me:

In Sen. Kaine, you have somebody that his entire life has reached out and has sought to understand other communities. He serves a very diverse state in Virginia, particularly Northern Virginia. He goes to an African American church and he speaks Spanish. His whole life, he's reached out to other groups, and I think that that's very fitting for a Democratic Party that is diverse in 2016.

Sure, the answer from the Secretary of Housing and Urban Development wasn't a stop-the-press quote, but it felt worth it.

Ask Questions First. Ask Who They Are Later.

As mentioned above, I have pretty terrible facial recognition skills. I once had trouble identifying my own father (on a precise street corner where we agreed to meet, no less). I say all this to explain a fairly embarrassing habit I developed of snapping photos of someone being swarmed and asking said person a few questions, anyways, whether or not i knew who they were. Then, I'd use the photo to figure out who the hell I was speaking to in that moment. At the DNC, I saw an elderly man being referred to as "senator" and being accosted with hugs and photo requests. I knew he was important and probably had several conventions under his belt. That meant he would be a good person to ask about the state of the party, provide some historical context for how fractured the convention seemed, and offer some advice for what Clinton could do to unify Democrats — and he spoke eloquently about all of those topics.

It was only until the interview was over and I cross-referenced my photo that I realized it was Tom Harkin, who served 30 years as an Iowa senator and addressed the convention Tuesday night.

A Photo Is Better Than Nothing.

Despite your best efforts, despite all of the charm and agility you can muster, a convention celebrity may be too busy doing cable news interviews or mingling with A-list peers in the luxury suites. If that's the case, at least snap a photo. That was our strategy in Cleveland when former Republican presidential candidate, Ben Carson, rebuffed our attempts at an interview. At least we snapped a pic — even if it was as he walked away.

And sometimes, when you're lucky, you get the new media holy trinity: FacebookLive, story, and a photo. That was my good fortune with CNN's Dana Bash.

Of course, that would have been a truly perfect convention celebrity moment if I hadn't been nervous and mispronounced her name during the interview.

In the unlikely event you're reading this, Dana, I'm still really sorry about that.