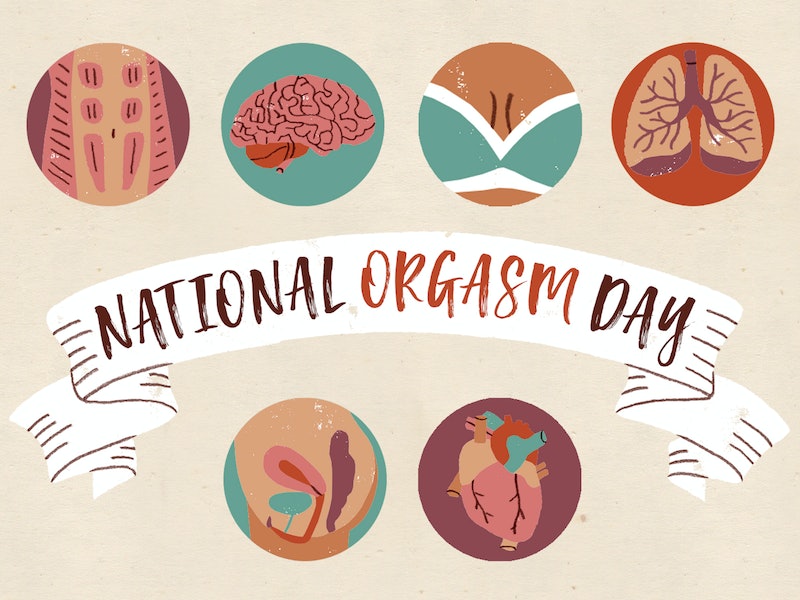 Whether you've had them a bunch, or are still figuring it all out (and hey, that's normal), orgasms are a big part of life. You might recognize them by their sensation alone, but it's interesting to find out how orgasms affect different parts of the body. Your body is really putting together a solid team effort when reaching that crucial point of sexual satisfaction.

As it turns out, July 31 is National Orgasm Day. And while it's not super clear how this holiday got started, it's definitely a good excuse to learn more about your body (and maybe get a little frisky at night). Since it's been reported that between 50 and 67 percent of women are prone to "faking it," now's the time to figure out what truly makes your body tick, and what kind of stimulation that you, personally, enjoy. It's different from person to person. There's not one surefire way to solve a lack-of-orgasm problem for all, but taking the time to figure it out will definitely be a worthwhile adventure that'll help you embrace your sexual side even more. J. D. Salinger has been attributed to the quote, "a woman’s body is like a violin and all, and it takes a terrific musician to play it right" through his writings, and hey, he was pretty much exactly right.

In order to understand your orgasms — both of the past and the future — a bit better, take a look and see which parts of the body work together when an orgasm takes place.

In general, the brain stimulates blood flow to your genitals after receiving thousands of pleasure signals from nerve endings. These signals begin as you become aroused. There's a lot going on up in your brain during an orgasm, so let's break it down a little bit:

The heart rate increases during initial arousal, and continues as the vagina swells from increased blood flow and gains sensitivity.

Breathing gets heavier in the excitement leading up to an orgasm.

During the first stage of an orgasm, nipples get erect and can harden based on sexual stimulation and pleasure, which is another symptom of the oxytocin release. Not only do a woman’s breasts become more sensitive during sex, but they can swell, too — sometimes up to 25 percent.

Abs and thighs tend to tense up at the very start of an orgasm, thanks to signals from the brain.

During arousal, these organs receive an additional amount of blood flow and become engorged. They then start to rhythmically contract, which results in muscle spasms.

More like this
I'm 42 & I've Never Had Sex. Is It Too Late?
By Sophia Benoit
An Honest Review Of The TikTok-Famous WalkingPad
By Kaitlyn Wylde
Here’s How To Deal With Sexual Frustration If You Don’t Want Casual Sex
By Annakeara Stinson and Mackenzie Sylvester
Here’s How To Reignite The Spark In A Sexless Relationship
By Vanessa Marin
Get Even More From Bustle — Sign Up For The Newsletter