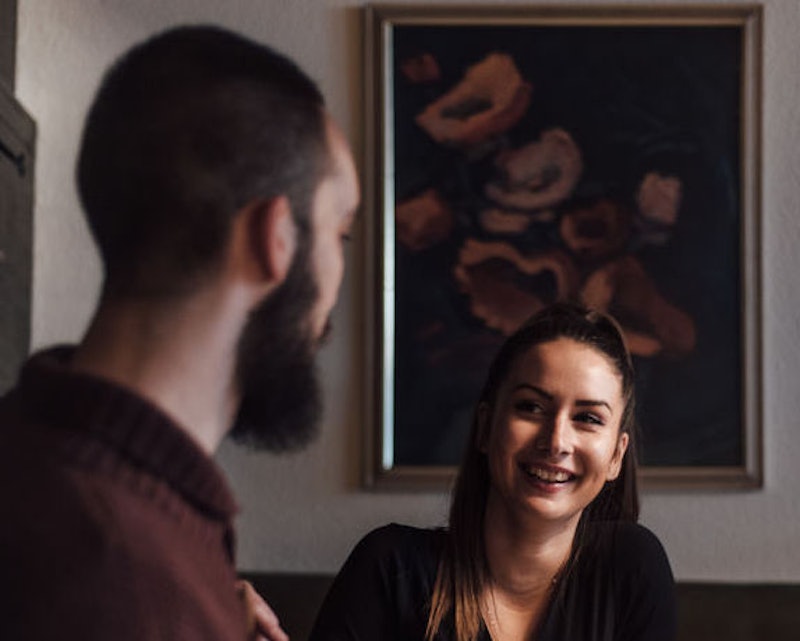 There are dozens of apps now that match people based on physical appearance for the purpose of dating or hooking up. But research conducted by the app Huggle shows that this approach could be hurting us. So, Huggle's doing something different and matching people the way they tend to meet in real life: by being in the same place.

When you're in a restaurant, shop, bar, or anywhere else, you can check in on Huggle the way you might on Foursquare and see which other users have visited it. (The profiles are pulled from Facebook.) You can only message someone when you've been to the same place. But if you haven't, you can still wink at them and see if they wink back. Huggle is mainly for friendship, though of course they can't help it if users happen to fall in love.

The purpose of the app, co-founder Valerie Stark tells Bustle, is not just to help people with common interests meet in a convenient way but also to get away from the superficial focus of many social apps. Of 1,500 Millennials surveyed by Huggle, 62 percent said appearance-based apps made them feel bad about their looks. This effect was especially negative for women. Eighty-five percent of women said they'd edited their photos in attempt to look more attractive.

“In a society that tries to eradicate bullying, physical shaming, racial, and cultural differences, it’s crazy that people still judge others by their appearance when looking for a relationship or friendship," Stark says. "Your looks do not say anything about who you are as a person; your lifestyle and interests do. You’re more likely to get along with someone who has similar interests to you than someone who you are just attracted to."

You can download Huggle on the App Store or Google Play to start checking in and see who's been going to the same places as you.