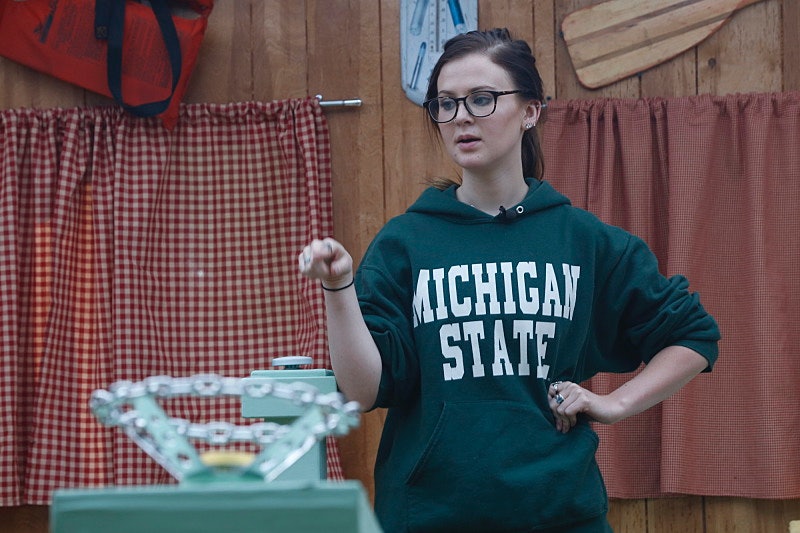 After years of watching Big Brother, I’m always shocked at just how quickly things can change in the house. If one person wins Head of Household or changes someone’s mind in an alliance — bam — everything that your fave has built so carefully has fallen to the ground. When Michelle won the Power of Veto on Big Brother 18 this week, Frank took her aside for a long talk, presumably to save himself. And boy, was the house tense when they thought that Frank would make it through eviction night. Luckily, Michelle now seems to want him to pack his bags and go instead, but why didn’t Michelle use her Power of Veto?

Suffice it to say that Frank wasn’t a popular person in the house. Basically everyone else had an alliance against him, and they all thought that Michelle wouldn’t go against them to save Frank. Michelle has been quiet so far on Big Brother 18, and I’m sure she’s just biding her time — maybe she thought that she could make a big splash with this Power of Veto. It was touch-and-go there for a while, though, because Michelle told America (and Bridgette later on) that she felt like Bridgette had taken Frank from her and that she felt slighted because she wasn’t as close with Frank as she wanted to be and now it was too late or something. According to Da'Vonne, Michelle was a superfan of Frank during BB14, which likely explains why she even considered using the PoV, but as Day pointed out, this is a new season and Frank's past shouldn't influence this summer's houseguests.

Luckily, sanity and strategy won out, and we know that Michelle did not use the Power of Veto, which means she really ended up saving Bridgette, at least for now. While it seems as if Michelle could have made a serious statement if she saved Frank, it would have been the ultimate betrayal — to herself. If Michelle would have kept Frank in the house, everyone who she had aligned with to get rid of him would have been hella angry. Angry enough, probably, to evict her the week after, with no one but Frank to save her.

If she kept Frank, Michelle would've sealed her own Big Brother fate and she seemed to realize that, though she seriously struggled with the decision. Plus, we’d all have to deal with another week of Frank, and that’s not something I think I’m ready for right now.

So what’s next for Michelle? I think that not using this Power of Veto will paint her in a light that’s strategically in line with the rest of the house. She’ll look like she’s doing what’s right for everyone else, but really, this could be a great opportunity for her to start double-crossing. We’re already more than a month into Big Brother 18, and things have to get serious. If you want to win, you need to have a plan, and Michelle’s plan so far is being smart enough not to turn the whole house against you. Hopefully, she can use the good will this has earned her to her own advantage soon.