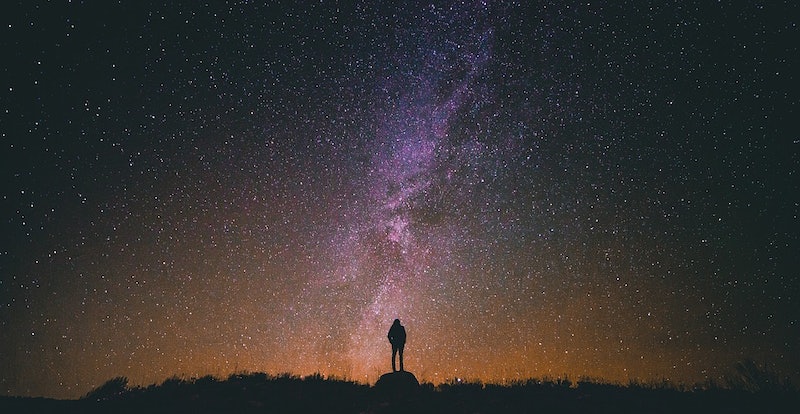 Every now and then, we find ourselves starring up into the infinite stars on a clear night, pondering that same old question: what book series should I read, based on my Zodiac sign? Astrology may not be a real science, per say, but it a lot of fun. And why use horoscopes to decide who to date or what to do when you can use them to pick your next binge read instead? Here are a few book series that might just be in your stars.

Now I know that your zodiac sign doesn't completely predict your personality. Some people might even go so far as to suggest that zodiac signs are complete garbage and not at all real (although those people are almost always Capricorns, am I right?). But when you decide to sit down and commit to a book series, you want to make sure that it'll be worth your time. If you're an Aries, you'll want to know that there's enough action and impulsive decision making. If you're a Cancer, you'll want to know how many tissues to have on hand if it's a major tearjerker. And if you're a Scorpio, you'll want to make sure that your book series has enough sex and beheading. So here are the book series for your Zodiac signs:

1. Aries: Song of the Lioness series by Tamora Pierce

Alanna is a girl in a world where adventure and swordplay are strictly boys only. So she disguises herself as her twin brother and sets out to bet a knight anyway, because no one says no to Alanna. Over the books, she grows from a girl with a secret into a fierce lady knight. Any Aries will appreciate Alanna's pluck, stubbornness, and willingness to stab people with swords in this classic, kick-ass fantasy series.

Taurus can be stubborn, but Taurus is also practical, reliable, and secretly quite a romantic. Anne from Anne of Green Gables may seem a little too flighty for Taurus at first, but she's sure to grow on you. These books are all about finding the romance and creativity in the ordinary day-to-day life of a sleepy town on Prince Edward's Island, and it's perfect for the Taurus who wants to unwind with a fictional trip to the beautiful Canadian countryside.

As a Gemini, you can't be forced into a box. Some people might call you two-faced, but really you're just complex. That's why you might like the Scott Pilgrim series: it's not your ordinary book or your ordinary comic book. It's a slacker adventure full of wit, hilarity, romance, quirky characters, and video-game-style show down fights, and it's as charming as any Gemini.

There's a reason that the symbol for Cancer is a crab: you're hard on the outside, but all soft and mushy on the inside. Cancers can be wildly creative, but what they really value in a story is relatable characters and fully-realized emotions. Butler's Patternmaster Series is about immortal shape-shifters and vampires (well, kind of), but the crux of the story is a deep relationship between two "monsters" with a surprising amount of humanity.

5. Leo: The Magicians by Lev Grossman

You may have heard The Magicians described as "Grown Up Harry Potter," and it's not that far off. The discerning Leo has probably read plenty of "chosen one" narratives (Leos tend to feel like the "chosen ones" of the Zodiac, after all). I mean, most Leos privately believe they should have been picked for secret gifted magic school, right? But Lev Grossman gives the whole magical teen genre a dark and interesting update.

6. Virgo: The Ladies' No. 1 Detective Agency by Alexander McCall Smith

Virgos love details almost as much as they love drinking tea and buying new office supplies. That's why all Virgos should read The No. 1 Ladies' Detective Agency books: Smith has written a somewhat cozy, somewhat daring mystery series about Precious Ramotswe, Botswana's finest private eye. Her adventures are full of brilliant, detail-oriented detective work, as well as plenty of tea-drinking and good conversation.

7. Libra: The Thursday Next Series by Jasper Fforde

Most Libras tend to be intellectuals: you're interested in a good balance of facts and fiction, and you love books that spark interesting discussions. That's why you need to drop everything and pick up the Thursday Next series. The books are set in an alternate England, where dodos have been resurrected as household pets, and classic literature takes the place of pop culture. The books are funny, irreverent, and genuinely fascinating for all literary Libra nerds.

8. Scorpio: A Song of Ice and Fire by George R. R. Martin

Well what did you expect, Scorpio? As a Zodiac sign, you're sexy, mysterious, and really intense. You're ruled by passions, and you can be ruthless when the situation calls for it. You might actually have a chance of surviving in Westeros, the violent and politically unstable realm of A Song of Ice and Fire. You might even be able to keep up with all those characters.

Sagittarius is often considered the joker of the Zodiac. But you're not just a fun party guy, Sagittarius, you're also a philosophizing deep thinker. That's why you should check out Discworld. Terry Pratchett's sprawling series is a satirical send up of nearly every genre, from high fantasy to journalism, with lots of off-the-wall humor. But his jokes are also full of actual thought and wisdom (as all good satire is).

Capricorns are often seen as the most responsible sign of the Zodiac. But that doesn't mean that serious and independent Capricorn can't enjoy the occasional thriller. The Millennium Trilogy is one of the most popular thriller series out there, and for good reason. It presents a dark, unrelenting world that even the most critical Capricorn won't be able to write off as silly, and it's a gripping mystery from start to finish.

Aquarius has a bit of a reputation for being "out there." But that's only because Aquarians are forward thinkers (sometimes so forward thinking, in fact, that they forget all about the present). The His Dark Materials trilogy has all the fantasy and originality to captivate an Aquarius, but it's also full of progressive thought, intellectual debate, and humanitarian philosophy. Plus talking polar bears.

12. Pisces: The Chronicles of Narnia by C. S. Lewis

The Narnia books may be considered the complete opposite of His Dark Materials, but that doesn't mean they don't have their own fantastical worlds to offer. The sensitive, artistic Pisces will find enchantment and inspiration (as well as a huge does of childhood nostalgia) in the Chronicles of Narnia. And then sweet, caring Pisces will then write a lengthy blog post about the feminist implications of Susan being left out in the end of the last book.

More like this
The 20 Best Audiobooks To Fall Asleep To
By Aoife Hanna and K.W. Colyard
'Bridgerton' Star Nicola Coughlan Confirms Season 3 Will Focus On Colin & Penelope
By Grace Wehniainen and Alyssa Lapid
Candice Carty-Williams’ 'People Person' Tackles Daddy Issues With Warmth
By Sam Rogers
Everything To Know About The Possibility Of 'The Essex Serpent' Season 2
By Rachel Mantock
Get Even More From Bustle — Sign Up For The Newsletter