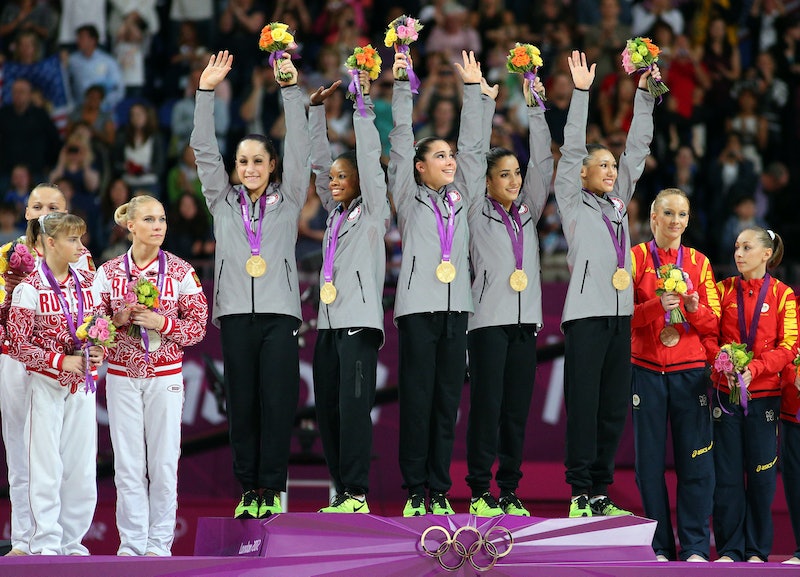 I remember watching the Magnificent Seven USA Gymnastics team at the 1996 Olympics and being blown away by the sport and the fierceness of the young women who were stealing hearts across the nation. We were lucky to experience another incredible year of U.S. gymnastics when the 2012 team, dubbed the "Fierce Five," took home Olympic gold and set the bar very high for Olympic teams to come. Following the 2012 games, Aly Raisman, McKayla Maroney, Gabby Douglas, Jordyn Wieber, and Kyla Ross became stars in their own right, but have all also taken different roads since. Now that the 2016 Rio Olympics are set to begin, where are the Fierce Five now?

When the 2016 U.S. Olympics gymnastics team was announced, I noticed a few familiar names, but was surprised to see that that only two of the 2012 Fierce Five members, Aly Raisman and Gabby Douglas, had come back for another chance at Olympic glory. The decision to return to the Olympics is not an easy one and requires additional years of grueling physical and mental preparation. While some of the 2012 team are still in the gym competing, some have been on the sidelines and focusing on new projects in their life outside of the gym, so here is where the 2012 U.S. gymnastics "Fierce Five" team is now.

Kyla Ross was the youngest member of the team and was only 15 years old when she competed in London in 2012. After the Olympics, her teammates all took time off, but according to USA Today, Ross continued to compete, winning five medals at the world championships in 2013 and 2014. In February 2016, Ross retired from elite gymnastics and announced that she would be attending UCLA in the fall. According to USA Today, Ross plans on working with the Bruins Division I gymnastics team, while majoring in biomedical engineering and working at her sports medicine doctor's office. But I'm sure she will definitely be watching and supporting the 2016 team from afar!

After becoming a break-out star at the 2012 Olympics for being the first African-American gymnast to win the individual all-around Olympic gold, Gabby Douglas took a break from competing like many of her fellow Fierce Five. She enjoyed her new-found celebrity, appearing on the cover of Sports Illustrated and the special edition box of Wheaties, a big accomplishment for any athlete. She returned to competition in 2015 at the City of Jesolo Trophy, where she placed fourth all-around. During the 2016 Olympic Trials, Douglas placed seventh but still found herself a spot on the 2016 gymnastics team, supported by national team coordinator Márta Károlyi.

In March 2015, Wieber announced her retirement from gymnastics in an essay for The Player's Tribune titled, "A New Routine." Like her 2012 teammate Ross, Wieber has found a home in her post-Olympic life in college. After a stress fracture following the 2012 games, Wieber never returned to competition and instead enrolled at UCLA in the fall of 2013. Because she had previously gone professional and couldn't compete in the NCAA, she became the head team manager of the Bruins gymnastics team and is currently majoring in Psychology.

Just a few days after Ross announced her retirement, McKayla Maroney told GymCastic in February 2016 that she would no longer compete in elite gymnastics. She said,

"One day I was sitting outside and I was like ‘Why am I doing this? Yeah it's cool that I want to do it and help inspire people but I didn't know how to be okay with not being a gymnast... I'm just ready to put my worth and value into something else."

Maroney still spent a few years competing after the London games, winning her second gold medal in vault at the 2013 world championships. After a career riddled with injuries, she eventually wanted to follow other pursuits and shared with GymCastic that she is now focusing on a music career and writing music after a few stints in acting.

After the 2016 team was announced, Raisman and Douglas became the first U.S. women to compete in back-to-back games after Dominique Dawes and Amy Chow. Like Douglas, Raisman took a hiatus from competition and traveled with the Kellogg's Tour of Gymnastics Champions in 2012. In 2013, Raisman competed on ABC's Dancing With The Stars and finished in fourth place.

The oldest of the Fierce Five, Raisman also returned to compete at the City of Jesolo Trophy in 2015, winning all-around bronze. After finishing third during the Olympic Trials, Raisman won her spot on the 2016 team, where she joins Douglas, Laurie Hernandez, Simone Biles, and Madison Kocian.

Even if the original Fierce Five aren't all together for the 2016 Rio Olympics, there's no doubt that these fierce ladies will continue to have success in every endeavor they put their heart and mind to, in and out of the gym. They've already proven it once and they will do it again.