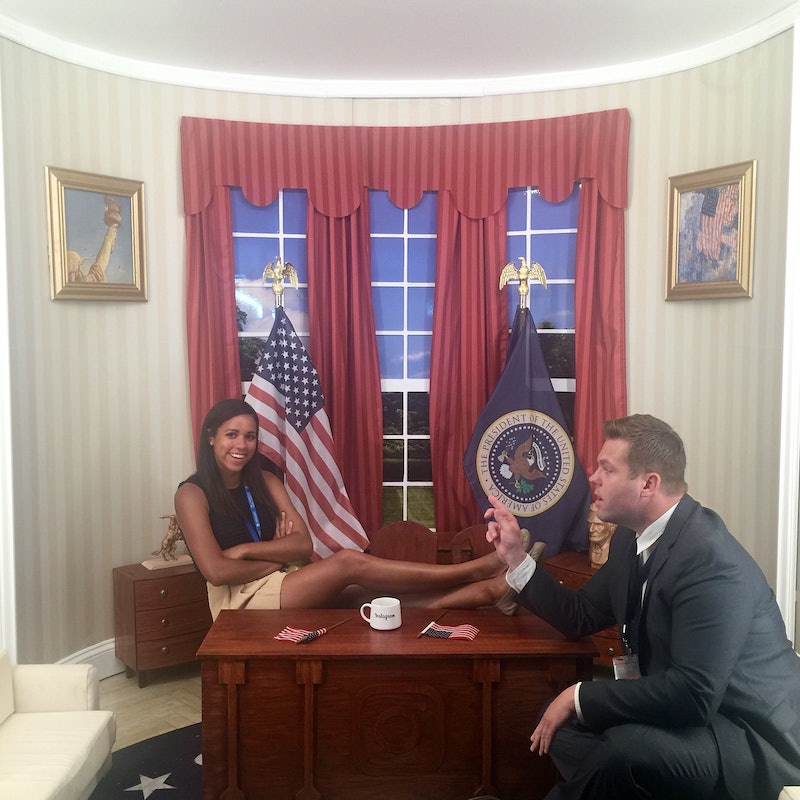 It was my first day at the Democratic National Convention — my first day at any national party's convention — so the second I overheard two men mention that they were Florida delegates, I jumped out of my train seat to interview them. “Well, I guess we have to talk to you since we can’t really go anywhere right now,” one of them said as they both reluctantly turned around to face me. I chose to use our few minutes together to try to get insider information about how Bernie Sanders’ delegates would contest Hillary Clinton’s nomination the next day. And I quickly learned how my feminism would be tested at the DNC.

As is standard, I asked to take a photo of them to use for my article. Immediately afterward, I was reminded once again of the sexism many women face in what should be a professional setting. “Can I take a photo with you now? You’re really cute,” the 29-year-old delegate asked. Now I was the one who had nowhere to go.

This delegate wasn’t a journalist, so it’s unclear why he would’ve needed a photo of us together. It’s also unclear what he would’ve done with it. I had just left a Sanders protest in downtown Philadelphia and needed to make my way to the Wells Fargo Center for the convention to cover the speeches, the tension between Clinton's and Sanders' supporters, and the historic moment of a woman becoming the first presidential nominee of a major political party. I wasn’t riding inside a crowded, humid, stinky train car for 20 minutes just for fun and for photo opportunities with random men. I was working. I was on the job. Women shouldn't have to worry about these things.

Throughout my week at the DNC, people stared curiously as I walked past them. Random men asked if I were attending the DNC for a school project as we stood awkwardly next to each other at the charging stations (these glorious stands that had eight spots to charge your phone). Others told me it was “cute” that I worked for a website for millennial women. I felt like an outsider. I felt that I was defined by my gender and that no matter how professional or hardworking I was, everything I did was considered alongside the fact that I am a woman and a young woman, at that. (I'm 22 years old.)

After a 16-hour day reporting live from the DNC, Bustle's politics editor Emily Shire and I sat in a cab on the way back to our AirBnB. I was exhausted, to say the least, and didn’t really feel like talking, but was forced to speak up when our driver made a remarkably sexist comment about a woman standing outside. “Wow. Her dress is showing way too much leg. Don’t you think she’s showing too much leg?” our driver asked. My blood boiled. “Are you just saying that to get a rise out of us?” I shot back. His answer was no, and I quickly and unapologetically told him, "What a woman chooses to wear is none of your concern. Women don't go around telling men they're showing too much leg; it's never OK for a man to think he can decide what's appropriate for a woman to wear." It’s 2016 — how do we still have men asking these ridiculously sexist questions and assuming a superior, authoritative role over women?

Whenever I was on the job inside Wells Fargo, I was confronted with another reality: Women are still severely misrepresented in journalism. I looked down “media row,” designated tables and sections for members of the media, and rarely saw anyone who looked like me, neither in skin color nor in gender. I guess that wasn’t too surprising: The field of political reporting remains heavily male-dominated, as the gender makeup is approximately 35 percent women and 65 percent men, according to data from the Women’s Media Center. But because of women’s disparate representation in an area that I care so much about, I constantly feel like I have to prove something to others, and they constantly focus on my gender first and my work second.

But these “lows” — moments in which my feminism was tested and my gender was at the center of my professional interactions — were ultimately met with many highs, too. During the convention, we interviewed Wendy Davis, an incredible and fearless advocate for women; we featured Planned Parenthood volunteers who championed women’s reproductive rights; we listened to Meryl Streep tout Clinton’s “grit and grace”; and, of course, we watched Clinton break the glass ceiling in a more monumental way than ever before.

As my co-worker Emily and I stepped out of that train car on the first day, the Florida delegate asked if we could continue our interview over drinks later. His friend and fellow delegate then decided that Emily and I were “the perfect candidates” to get drinks with them and to be their guests to an “exclusive” Florida delegates event. After a week of dealing with sexism and having my feminism tested, I like to think he meant we’re the perfect candidates in a presidential sense.

More like this
Michigan’s Governor Is “Going To Fight Like Hell” To Protect Abortion Access
By Andrea Zelinski
How To Fight For Reproductive Rights, Based On How Much Time You Have
By Courtney Young
Here's How To Practice Self-Love In Small Ways Every Day
By Mackenzie Sylvester
How Sunnies Face Is Championing Filipino Beauty
By Kristin Corpuz
Get Even More From Bustle — Sign Up For The Newsletter