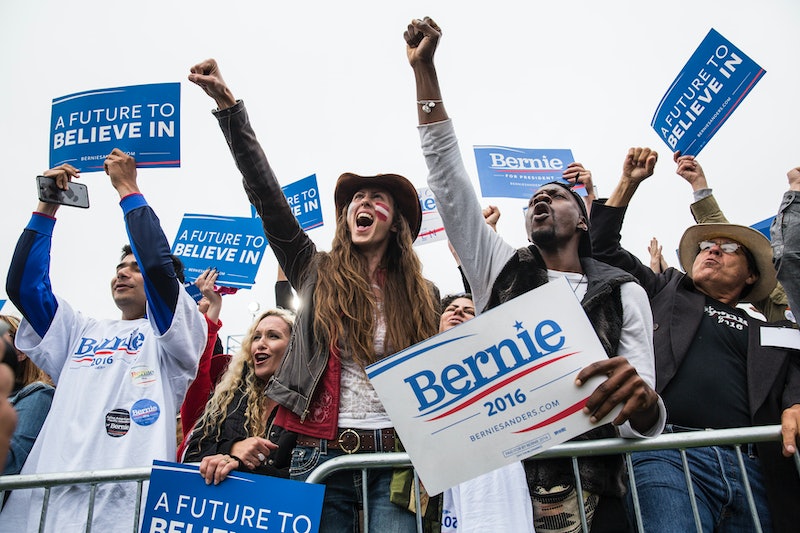 When the DNC comes to a dramatic conclusion on Thursday evening after the much-anticipated speech by Hillary Clinton is delivered, Democrats will feel pumped. Many exuberant. But there will likely be a group that will be upset, disappointed, and possibly enraged. And that group is the Berners. But there are some reasons for Sanders supporters to feel good about the outcome of the DNC, and possibly even vindicated. And I'm not going to to go the Silverman route and call such sentiments "ridiculous."

As a young freelance reporter in NYC this past spring, I felt that I absolutely had to be at the Sanders' rallies here in the city, covering the speeches given in Brooklyn and Manhattan by interviewing supporters, both old and young, who had come to stand behind their candidate. The level of enthusiasm millennials showed when at these rallies was infectious. To many, it seemed that a candidate had finally emerged who actually cared about the increased burdens of student debt, income inequality, and the job market. Rally attendees also articulated a disillusionment with Congress and the special interest politics that Sanders so boldly condemned in his campaign speeches.

But especially in New York, a percentage of those supporters, many of whom probably had never voted before, were unable to vote in the presidential primary. Some claimed it was voter suppression, but the Board of Elections rules on voting registration had prohibited some 125,000 voters from partaking in the election. While it is not clear if those votes would have really affected the outcome of the primary, it could have meant a change in the number of delegates each candidate received. And that was enough to make several Berners angry.

But the jaw dropping revelations that came with the release of the 20,000 DNC emails by the pro-transparency group Wikileaks came like a blindsiding blow to Berners and to the democratic process as a whole, as the emails revealed what appeared to be a bias against Sanders in the primaries. The DNC apologized to the Sanders campaign for the "inexcusable" emails. And then, DNC voicemails that were released during day three of the convention, reportedly reveal messages that demand that the DNC interfere with the Sanders campaign.

So where's the bright side here?

However you feel about the outcome of the Democratic primary, Sanders has exuded class and absolute commitment to the Democratic process during this past week. After the Tuesday roll call revealed that Clinton received a total of 2,842 delegate votes, Sanders, who received 1,865 votes, motioned that the convention suspend procedural rules when it came to counting the delegate votes for his state of Vermont, the last state to undergo roll call.

The historic and evocative Sanders endorsement delivered on the DNC's first night focused on domestic issues, wage inequality, and the importance of making the election about unity. It bore a similarity to his campaign rally speeches, but it also did something else. Sanders tactfully and quite boldly extolled those who supported his "political revolution," as well as advocated for the ideals that his campaign espoused right in the middle of his speech.

And then, as a consummate politician, Sanders, in his throaty and thundering voice, exclaimed that the campaign was not about a person, but was about "the kind of future we create for our children and our grandchildren," as well as "ending the 40-year decline of our middle class":

And with the recent news of The Sanders Institute, which Sanders told USA Today will raise awareness for the "enormous crises” that Americans are facing, along with the Sanders organization called Our Revolution political organization, which will help recruit, train, and fund progressive candidates' campaigns, it seems clear that the senator will not be surrendering his political fight against Citizens United and the flaws with establishment politics anytime soon. Not to mention that his campaign has reinvigorated a serious conversation on super PACs, government transparency, and the wealth disparity affecting this country.

So, when I think back to just a few months ago in April when Sanders delivered his speech outside of his childhood home on 1525 East 26th Street, resembling something of a messianic aura as he dove into his income inequality math on the "one-10th of 1 percent," I knew I was witnessing history.

And while the "political revolution" that Sanders started is not going the route that his supporters might have hoped for, his ideals and platforms don't seem to be going anywhere, anytime soon. And that is something that Bernie-or-Busters ought to be proud of.