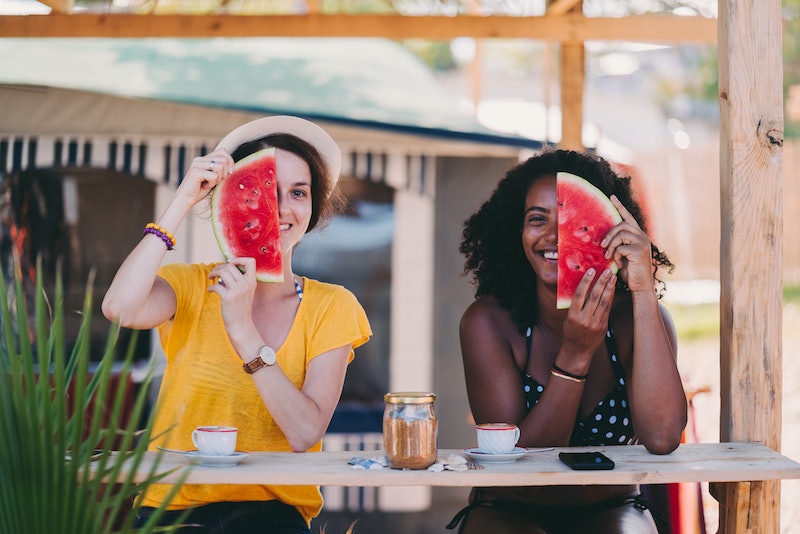 The juicy links between food and sex reveal what feeds our desire — and what can stop it in its tracks. At times the two are besties, working in tandem to make you have the night of your life. At other times, they're sworn enemies, working against one another to make you completely lose your appetite.

While there are the few who enjoy sexing and eating simultaneously, many folks do not fall into that group — unless your sexual icon is Seinfeld's George Costanza. To me, getting a pile of fries or a turkey sandwich near my coital crashpad means courting immediate arousal burnout. But, then again, after some drinks, all bets are off.

Other than the rare pizza-slice-meets-reverse-cowgirl after a few beers I mentioned above, food and sex usually unite in more complex ways. Maybe the meal you have with your lover influences your turn on levels later, or maybe the feeling you have lusting after a hot piece of chocolate peanut butter pie is strangely similar to the feeling you have while feasting your eyes on a hot piece of ass. We all hunger for something, what it is merely depends on our mood.

Here's what surveys and studies have to say about the links between food and sex:

1. Millennials Think Food Is A Tasty As Sex

Here's a no brainer. Recently, Havas Worldwide partnered with Market Probe International to survey 11,976 men and women about the food they fancy for an Eaters Digest survey. The result? Fifty-four percent of those involved between the ages of 18 and 37 believe food can be just as pleasurable as sex. Interestingly, women were more likely to believe this than men — maybe because we just have a better understanding of the fact that human contact is fleeting but red velvet cupcakes are forever? Just a guess.

In a study that should be filed under "painfully obvious," researchers discovered that women are more likely to respond to romantic cues when they aren't hungry. After 20 women viewed images of folks doing cutesy couple stuff and images of neutral things, a brain scanner showed that ingesting calories increased their brain activation levels.

3. How Much You Eat Can Impact Your Sex Drive

There seems to be a correlation between how much you eat and how much you're in the mood for sex. Have you ever gorged on an entire pizza and/or burrito? If so, getting it on was probably the absolute last thing on your mind afterwards.

One study that slashed its participant's calorie intake by 25 percent over a period of two years showed improved mood, stress reduction, and increased sex drive in those who consumed less. This is only one study, of course, and that's not to say anyone who cuts calories will be rewarded physically by doing so. In fact, it can be very dangerous to cut calories too much. In addition, who wants to have sex if you're consistently hungry? Research suggests that certain kinds of dieting can put you in a bad mood, which is definitely a libido killer, too. Either way, how much you eat can impact your sex drive.

4. What You Eat Impacts Your Sex Drive

The many supposedly sex drive boosting foods out there include: blackberries, cherries, cinnamon, broccoli, figs, cacao, avocados, bananas, strawberries, caviar, lettuce and more. So are aphrodisiacs real? Well, the scientific answer is yes, but it's more complicated than, "eat this food and get instant arousal." Basically, anything that increases circulation and/or serotonin production in the brain is good for your libido. Better overall health = more energy to enjoy sex. There are no quick fixes.

In a study of 731 healthy Italian women between 18 and 43 years old, those who ate apples more than once a day reported increased lubrication and sexual function. According to Medical Daily, apples contain "phloridzin, a key compound that mimics the female sex hormone estradiol, which plays a huge role in vaginal lubrication and female sexuality." So perhaps an apple a day may keep your sex life in play? The outcome of your apple indulgence may vary, but it will always be sweet.

More like this
The 19 Best Tweets & Memes About Bisexual Awareness Week
By Lexi Inks
Are Quality Time & Gift-Receiving Love Languages Compatible?
By Lexi Inks
The Differences Between Polyamory & Open Relationships
By Lexi Inks
Breeding Kinks Have Been On The Rise Since Roe V. Wade Got Overturned
By Lexi Inks
Get Even More From Bustle — Sign Up For The Newsletter