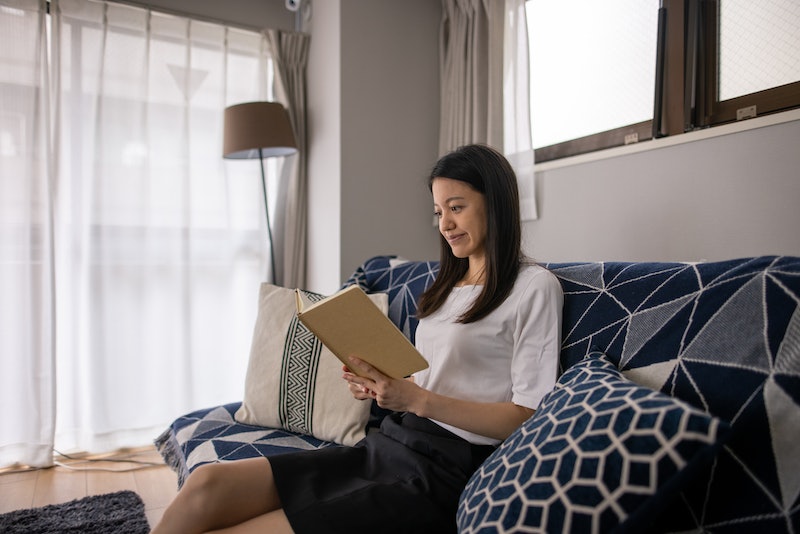 You know how they say there are early birds and night owls? Yeah, I'm definitely not the first one. Morning is my least favorite part of the day, and a lot of it has to do with how hard it is for me to wake up. I'm that person who sets ten obnoxious alarms and sleeps through all of them, making me the worst person to live with in the history of mankind. I've tried everything from coffee to exercise to going to bed earlier in an attempt to teach myself that mornings aren't the enemy, and all of my efforts have proven to be futile. I was ready to throw in the towel (and probably fall asleep on it)... until I thought of one more idea.One of the reasons I'm often up so late is because I tell myself "just a few pages" when I open a book for my nightly reading session and end up staying up until some ungodly hour because I can't put it down. Books make some people's eyes tired, but for me, they're like caffeine. So what would happen if instead of blaring alarms and endless mugs of coffee, I tried reading in the morning to wake up my sleepy brain? I figured it was worth a try.

Since I hate mornings so much, I allowed myself a lot of freedom when it came to what I read upon waking up. Any book I thought I'd enjoy, whether new, old, or in-progress, was fair game. But I had to at least start reading it before I did anything else. I kept my Kindle right next to me so I'd have no excuse to do anything else — including eating breakfast or checking unread messages — before I started reading. I also mandated that I had to read for at least 15 minutes each day, so that way I couldn't skim two pages, decide it wasn't working, and then go back to sleep. With these two rules set in place, I let myself find out what would and wouldn't work when it came to reading to help me wake up.

"Getting some reading in right away was like coffee, but without the jitters."

Holy bologna, was I tired. The fact that I managed to even process words was a miracle, but it helped that I was currently in the middle of a quirky paranormal thriller by Jutta Profijt called Morgue Drawer Four . I'll be honest: I'm not sure if I would have made it if I had to start a new book on day one, so I was glad that my sleepy brain didn't have to remember any new character names or force itself through a story I wasn't already invested in. That said, reading a bit did help to wake my brain up and make it start thinking right off the bat. My normal routine when I first wake up is to mindlessly browse Facebook and Instagram, which admittedly isn't the best way to get a person's mind up and running. Getting some reading in right away was like coffee, but without the jitters. As an added bonus, I felt like I was in a much better mood, and the "I can't wait to be done working so I can get back to my book" grumpiness was held off at least for a few hours.

I didn't have a whole lot of time to squeeze in some reading before getting the day started, but I made it a priority, and I was sure glad that I did. MD4 was getting more intense, and combined with the rush I felt to get my reading done as fast as possible, I actually felt my heart rate go up a little as I read (Yeah, I'm out of shape). I had to settle for reading for just 10 minutes instead of 15, but it was still enough to make me feel satisfied and ready to complete the rest of the stuff I had to get done.

I probably spent a little too much time reading this day, but being as I was mere pages away from finishing Morgue Drawer Four, you could hardly blame me. By this point, I was starting to realize that the hardest part of reading in the morning wasn't the actual process of reading, but actually remembering to read. I realized that I'd developed a rather lazy wake-up routine, which included hitting the snooze button a thousand times and then checking the notifications on my phone. I almost forgot to read at all on day three, so I decided that I had to find a way to remind myself to read before doing anything else. Since switching off the alarm on my iPad is usually the first thing I do when I wake up, I decided to use that to my advantage to remind myself to read as soon as I was awake.

A combination of my motivational new alarm labels and my excitement to read a new book now that I was finished with Morgue Drawer Four helped me remember to get reading the moment I was able to force my eyes open. I tried cracking open Khaled Hosseini's latest novel And The Mountains Echoed , but since my brain wasn't fully awake yet, I decided to save it for a time when I could appreciate it a bit more. I was already re-reading my favorite childhood story, Inkheart, for another experiment, so I figured I could kill two birds with one book. As much as I enjoyed starting my day with Morgue Drawer Four, the impact that reading Inkheart had on me was way stronger. Cornelia Funke's book has always had a knack for filling my heart with happiness and satisfying my imagination, so by the time my morning reading was finished, I was not only more awake, but also in a way better mood than I usually am less than an hour after starting the day. And because I'd read it a million times before, I didn't have to worry that my sleepy brain would miss an important plot point.

I soon discovered a downfall of reading Inkheart before completely waking up: that book hurts when you accidentally drop it on your face. Getting smashed in the nose with over 500 pages wasn't quite what I was hoping for when I decided I wanted to use the book to help wake me up, but hey, it worked. Today, I tried reading while eating breakfast and immediately determined that I wasn't a fan. Holding a book open with one hand while holding a fork with the other hand is possible, but distracting. I'd have to keep my two favorite parts of my morning routine separate from now on. Today was also the first day that I felt long-term effects from my new morning activity. Throughout the day, I felt more inspired to write, which is a really good thing since I write for a living. I often struggle to feel creative, or my brain just gets tired from constantly being "on" all day, but after reading Inkheart for a while, it seemed as though the book's magic told my mind, "Look what you can do if you keep going!" I found myself able to work for longer periods of time without needing a break, and I had my fingers crossed that it wasn't just a fluke.

After just four hours of sleep (late night coffee is a bad idea), the last thing I wanted to do when I woke up was make my brain actually work. Still, I forced myself to open my book and keep going. Even reading one of my all-time favorite books wasn't enough to wake me up today, though. My eyes kept closing despite my efforts to keep them open, and unlike the other days in which I was happy to be reading, I just wasn't feeling it today. The rest of the day, I felt as sluggish as you might expect after only getting half the recommended amount of sleep. Inkheart wasn't enough to save me today, and I ended up having to rely on caffeine to transform me from a zombie into a human.

The last day of my week of wake-up reading was thankfully a happy ending to this experiment. I had arrived at one of my favorite parts of Inkheart, and the prospect of reading it again was enough to help me shake off my morning grumpiness and start the day in a decent mood. I wouldn't say I was at Disney-princess-levels of rising and shining, but at least I wasn't hissing at the sun. The rest of the day found me slightly more energetic than normal, but I couldn't be sure if it was from reading or the fact that my "normal" is equivalent to that of a disgruntled sloth.

I don't know if I'll stick with my reading routine, but it's definitely something I'll be doing more often when I wake up not feeling like I was spooning with the Grim Reaper all night. It forced my brain to be active right from the start, but when you're so tired you can't keep your eyes open, it's hard to focus on the words of even the most interesting novel. Since I'm most definitely not a morning person, it was also a lot easier for me to read an old favorite instead of a new novel that had an unfamiliar plot. Everyone is different, but if you hate mornings as much as I do and still want to get some reading in before starting the day, it might be best to go with something you can process while still sleepy.

"It forced my brain to be active right from the start, but when you're so tired you can't keep your eyes open, it's hard to focus on the words of even the most interesting novel."

It would probably take the Kool-Aid man crashing through my bedroom wall to instantly wake me up, but reading before I'd gotten out of bed was a relaxing, pleasant way to get the gears moving in my brain. If you're looking for a way to kickstart your good mood, give it a try and see how you feel. There's nothing on Earth that could turn me into a morning person, but being able to read got me as close as I'll ever be.