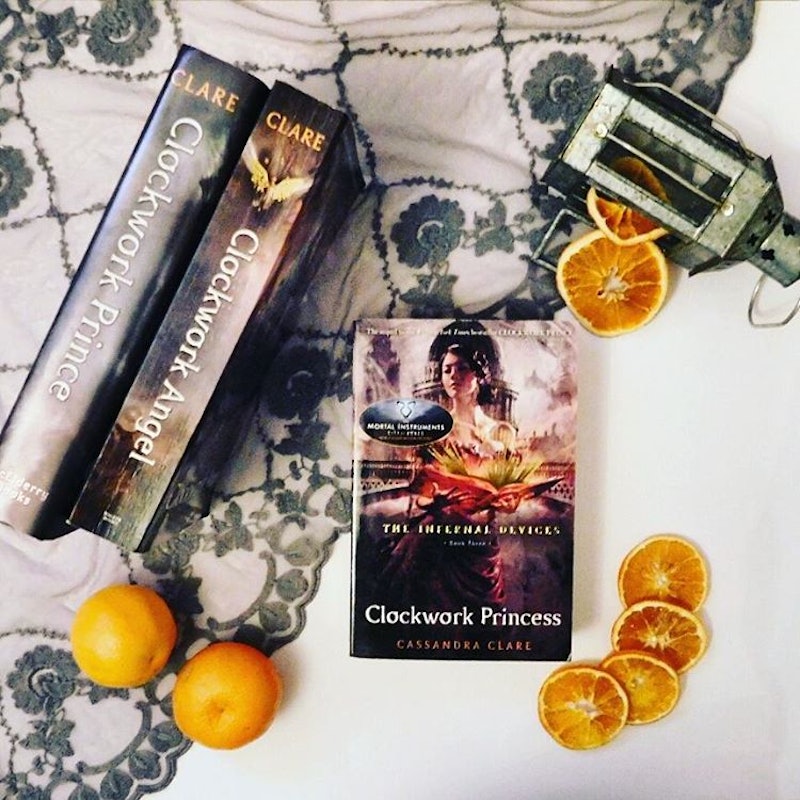 Long before the days of Netflix, book nerds had another all-consuming habit: binge-reading a new book series. Like being unable to stop yourself from clicking "yes" when your computer asks if you are "Still Watching," readers often find themselves frequent victims to the things that happen when you get addicted to book series. Take it from someone who has been there, these are some serious and totally unstoppable afflictions.

A a book-lover gets drawn in, caught up, and completely preoccupied whenever they discover a new series they like. They start in on that first chapter, and before they know it, they're scouring the internet for information on the next installment's release date, series spoilers, and anything else they can find out about their new favorite books. They get sucked in to message boards about the books, look for any clues about the characters' future from the authors social media accounts, and try and convince everyone around them to read the books, too. When a series is that good, it doesn't take long for the reading obsession to set in.

Before you crack open the first book in a new trilogy, you should be prepared for these 12 things that happen when you get addicted to a book series. Consider yourself warned.

1. It Becomes All You Want To Talk About

Forget news, politics, and your friend's love life, because when you get addicted to a new series, it's all you want to talk about. You're either dissecting plot points, recounting your favorite parts of the story, or arguing over the future of the series and its characters. Seriously, you won't be able to shut up about the books, but don't worry, because your real book nerd friends will understand.

When you love a series and you spend so much time with it, you'll begin to feel like you really know the characters, and once you become addicted to the books, they'll start to feel like family. You'll get upset when bad things happen to your favorite characters or, heaven forbid, they die. You become invested in their future and their happiness, just like you would with someone close to you in real life. When you're addicted to a series, the books and the characters become a part of you.

3. You'll Try And Convince Everyone Else To Read It

Once you find a great new series, you can't wait to tell share it with everyone you know, readers and non-readers alike. You want everyone you know to become just as obsessed as you are, so you finally have someone who likes talking about the books as much as you do. Plus, the more people you get to read it, the more people you'll have to sympathize with while you wait for the next book to come out. The bottom line, though, is you just want others to get to experience the joy you felt when you first read the series.

4. You'll Miss The Fiction World It's Set In When You're Not Reading

Each book series exists in it's own world, whether it's set in real life New York or somewhere fictional like Narnia. When you get addicted to a series, you not only love the story and become close with the characters, but you also start to feel at home in the world of the book. When you're not reading it, you miss that feeling, and you can't wait until you can come home to it again.

5. You'll Look For Excuses To Reread The Books

Whether you're waiting in between books or you're prepping for the release of the movie adaptation, you'll find plenty of excuses to reread the books in the series instead of trying to find a new one. You can't help it, you know the story is good, the characters are great, and the books are fantastic, so why not let yourself enjoy them over and over again.

6. You'll Pre-Order Each New Book Months Before They're Released...

The second you find out the next installment in the series is coming out, you whip out your wallet and pre-order it before it has the chance to sell out. You've already waiting long enough for this book, and you want to make sure you don't have to wait a second longer when it finally hits shelves.

7. ... And You'll Be There At The Midnight Release

Possibly in costume. Yes, you are a hardcore fan.

Whether it's a few bookmarks, a printed t-shirt, some jewelry, or multiple copies of each book, you'll eventually end up with plenty of paraphernalia from whatever series you're addicted to. Your friends and family will constantly gift you new series-themed items, and you won't be able to walk into a bookstore, novelty shop, or book event without walking out with an armload of stuff. Before you know it, you'll be surrounded by it — not that you're complaining.

9. You'll Learn Everything There Is To Know About The Author

If you're truly addicted to a book series, then you'll want to know everything there is to know about the creator behind it. You'll follow their social media accounts, look up local book signings, and, of course, dive into their backlist to find out what other amazing books they've penned. From their birthdays to their writing inspiration, you'll want to know everything you can about them, because they're the reason your favorite stories exist, and who can blame you.

10. You'll Have REALLY Mixed Feeling When The Movies Start To Come Out

Once you find out about the film adaptations of your favorite series, you'll start to feel awfully conflicted. On the one hand, you can't wait to see your beloved characters brought to life on screen, but on the other hand? Well, what if they completely screw it up and ruin the books for you, or the worse crime of all, change the ending? You won't know how to feel until you see the films, and until then, all you can do is hope they don't totally suck.

11. Forget Real Life, Because You'll Be Too Busy Reading For Anything Else

If you're addicted to a series, you would rather spend your weekends curled up on a couch with the books than anything else. Who needs dinner dates and trips to the park when you have an entire world just waiting for you to dive into? Say goodbye to your social life, because once a series becomes your obsession, it's all you want to do.

12. Eventually, You'll Get The Worst Kind Of Book Hang Over

As painful as it may be, every series comes to an end. When you get to the final pages of the series you're addicted to, you will experience the worst kind of book hangover there is. You'll feel lost, confused, and hopeless. How will you ever find another series as satisfying? What if you never love a book again? Take it from me, no matter how bad your series hang over may be, there is always another book out there for you.