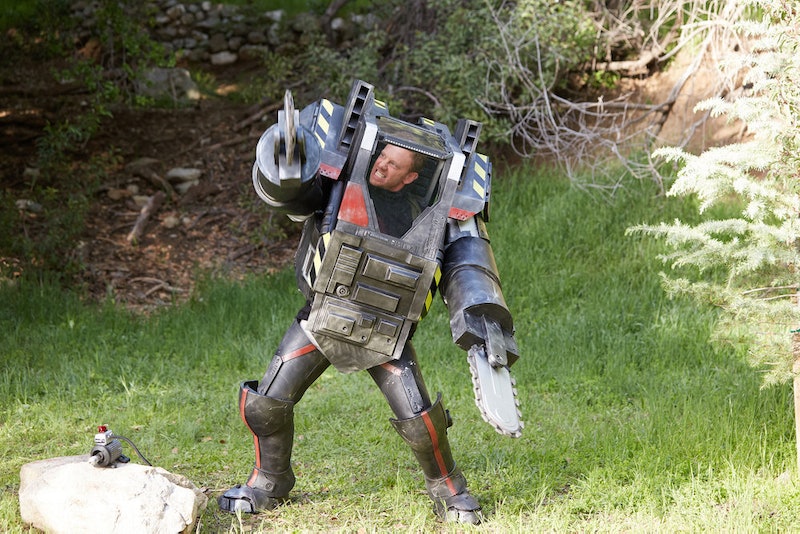 The first Sharknado movie won fans over in 2013 and now, it's not quite summer unless Finn Shepard (played by Ian Ziering) and his chainsaw are saving the world from twisters filled with sharks. Sharknado 4: The 4th Awakens premieres Sunday night on SyFy and the fourth film in the franchise is still awesomely campy and so very now — although it takes place four years since the last movie (get it?). As you watch, you'll want to know all of the pop culture references in Sharknado 4: The 4th Awakens , from the obvious ones (ahem, Star Wars) to the not-so-obvious (Baywatch? Really?).

Since the first Sharknado attack in the first TV film, the twisters-with-bite spawned (campy movie) sequels in New York City, Washington, D.C., and more. In Sharknado 4, everyone thought the deadly cyclone problem was solved by a scientist named Aston Reynolds (played by Tommy Davidson), but soon, the Sharknados return and take aim at the entire country, using various elements, like hail, fire, oil, and more. Naturally, Finn and his family are on a quest to save the world once again, with lots of celebrity cameos and pop culture references peppered throughout.

Here are all the pop culture references in Sharknado 4, just in case you blinked and missed one.

The movie takes so much inspiration from the epic space franchise, from the title (inspired by The Force Awakens) and the crawl at the beginning of the movie, to the lightsaber-hand April (Tara Reid) is now equipped with.

Finn tells Uber driver Carrot Top that he and cousin Gemini are in Vegas for "family fun" and a "family reunion," I can't help but think he sounds like Clark Griswald of the National Lampoon flicks — hopeful for some family time, but unaware that it's all going to go awry soon.

Yup, the movie references itself with Las Vegas casino slot machines with a Sharknado theme and the logo of the movie. Not to mention all the Sharknado songs on the soundtrack. How meta.

While the Shark World casino is facing a Sharknado, a casino guard insists on watching NBC and the network's morning program (which seems to be airing in the evening?). You know, because SyFy is part of the NBCUniversal family and this allows cameos from Al Roker and Savannah Guthrie.

When Las Vegas floods from the sand-based Sharknado, Finn and the gang commandeer a "ship" from a casino and steers it on the rough waters, much like in the George Clooney film.

Right as Matt reunites with his new bride Gabby and his dad Finn, the "ship" they are on is set to hit an isle filled with sharks that tears apart the boat. Or as one of the ship's crew says, "Sharkberg, right up ahead!" — just like the famous line from the James Cameron movie.

Gemini references this Nicholas Cage movie when she notices the Sharknado is headed out of Sin City and into the desert.

Wilfred tells Gilbert to zip his lips during an experiment by saying he's not giving an Oscars speech. Ouch. Outspoken actor Stacey Dash plays the Mayor of Chicago, who is the only person in the movie who thinks Finn is the cause of the Sharknadoes. Her character taking a different position is much like her outspokenness regarding #OscarsSoWhite and the lack of diversity in nominees this year.

Dash's mayor says "I'm mad as hell and I'm not going to take it anymore." That's a classic line from the Paddy Chayefsky movie Network.

Gilbert makes a reference to going "boldy where no man has gone before," an obvious reference to the beloved sci-fi series.

This might be a stretch, but while Finn and the fam are speeding away from a Sharknado in Texas, they stop at an actual chainsaw store. The owners make a lot of references to, um, interesting meat sandwiches, a creepy man, and using the chainsaws for "home use," so I'll let you draw your own conclusions.

Later, one of the owners revs up a chainsaw and says, "It wouldn't be Texas without a chainsaw massacre."

Finn's buddy Colton (Steve Guttenberg) introduces the gang to a vintage car, which seems to honk and blink lights on its own. "It's like she has a mind of her own sometimes," Colton says. The car's name is Christine, a clear reference to the smart car '80s horror movie Christine.

A Sharknado heads right for a Comic-Con in Salt Lake City, Utah. This is a pretty meta reference, since the movie Sharknado often has a presence at San Diego's Comic-Con in real life.

Finn's mom Raye is living in Kansas with Finn's young son Gil, just like Dorothy did. Dash's Chicago mayor tells Finn that she's "going to get you, Finn Shepard, and your little chainsaw, too" — something the Wicked Witch of the West would say.

Eventually, the Sharkando heads for Kansas, where Raye and Finn hide in an underground shelter. Gil even says at one point, "I don't think we're in Kansas anymore."

17. Indian Jones & The Raiders Of The Lost Ark

A big shark ball made of twine rolls down a street and Finn to try and outrun it, just like in the classic movie.

April finds Finn and son Gil hiding under some wreckage and holds out her hand to them, saying "Come with me if you want to live," just like Arnold Schwarzenegger did.

Aston Reynolds quotes Will Smith's classic line, "I make this look good" while showing off his fancy flying, Sharknado-fighting suit.

In a scene where Gilbert suits up, Hasselhoff is reunited with Baywatch co-stars Alexandra Paul and Gena Lee Nolin, who talk about the lack of good pay for lifeguards and loving the beach. They even run away from the sharks Baywatch opening credits-style.

Just like the legend goes, King Arthur pulls Excalibur out of the stone and young Gil Shepard pulls a chainsaw out of a stone, showing he is now ready to lead.

As you can see, Sharknado knows how to cram in the pop culture references along with, well, all of those pesky sharks.