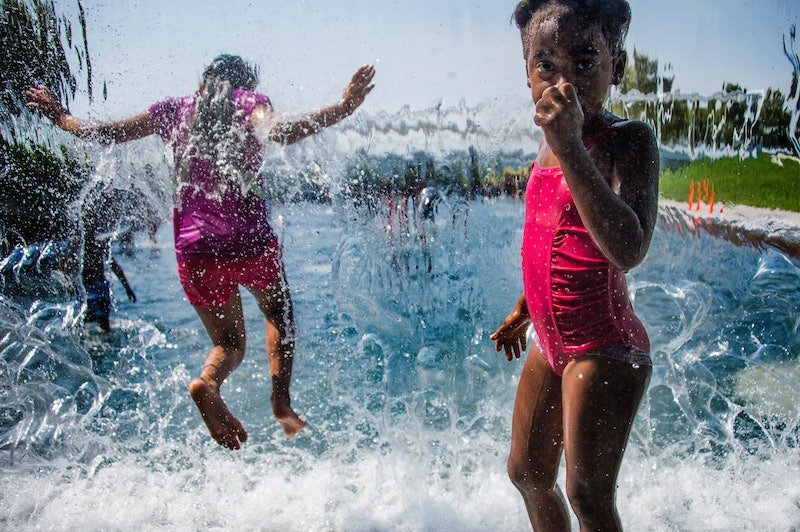 With almost the entire United States suffering through dangerously high heat levels for days, the one question that’s undoubtedly on everyone’s mind is, when is the heat dome ending? Well, I have good news and bad news: The good news is that it looks like the worst of it is over; the bad news, though, is that we probably haven’t seen the last of it — and we’ve got something else to worry about now, too. Sorry, everyone.

It’s been about a week-and-a-half since we first started prepping for the monstrous heat wave that subsequently swept across the entire country. I am not a meteorologist, so it is sometimes difficult for me to understand exactly what technical terms related to weather mean; however, Bustle’s Cate Carrejo provided us with a wonderfully concise explanation of what a heat dome is back when we were preparing for it. Since I found this explanation so terrifically helpful, allow me to present it to you again in all its glory:

A heat dome is caused by a ridge in the jet stream, the path of air that circulates around the United States. When a ridge happens … high pressure sometimes gets trapped in one area and won’t move. The high pressure creates a dome which won’t let hot air rise, forcing it back toward the ground and reheating it on the way back down.

It’s a vicious cycle, basically. And since this particular ridge was located over the Midwest, it meant that we all got to experience its effects. By July 24, at least 26 states had issued heat warnings and advisories, according to CBS News, and by July 25, there was only one state in the contiguous 48 where temperatures weren’t soaring into the 90s: Washington state.

However, as of Friday, the heat dome in its current form seems to be dissipating. Temperatures across the United States have been dropping — in DC, where I’m located, it’s currently a magnificent 77 degrees out as I write this sentence (about 9:00 a.m.), and given that as recently as yesterday, it was already a whopping 88 by 8:30 a.m., well, let’s just say that I’m really excited about it — and weather reports throughout the weekend show highs merely in the 80s. Indeed, as National Weather Service meteorologist Jay Engle told the New York Times as the heat wave began to lift, the dome is “going to be pushed out into the Atlantic.”

However, as Curbed New York notes, we probably haven’t seen the last of the brutal heat this summer — and what’s more, the heat dome is about to get replaced by something just as apocalyptic-sounding: massive storms and flooding. Reports Weather.com, severe storms are expected throughout the country, with flash flood warnings in place in many locations (Kentucky got called out specifically by name here, so watch out, Kentuckians). No word yet on whether this particular DC Metro station will turn into a waterfall again, but it wouldn’t exactly be surprising if it did.

Stay safe, everyone. We’re not out of the woods yet.