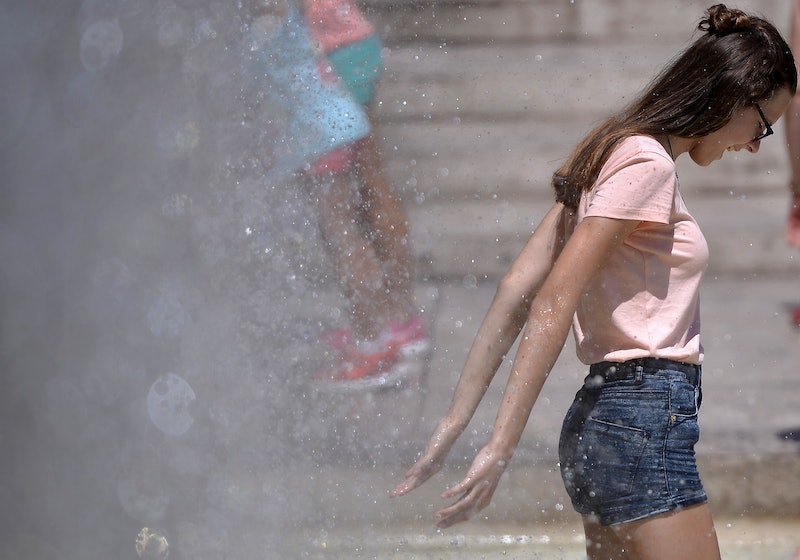 This last week was really stinking hot. Especially in the Midwest and on the East Coast, thanks to a miserable heat dome that made temperatures that were already high continue to heat up. It was so hot that even if you decided to stay inside, you could tell how hot it was because your windows were fogging up like two teenagers inside of a parked car.

So naturally, as with any natural disaster or apocalyptic weather, the people took to Twitter to "comicplain" — that's a word I just made up to describe the way people humorously complain about things in a trendy way. @Midnight with Chris Hardwicke, a Comedy Central show that thrives on creating hashtag challenges, started a #HeatWaveIn4Words game that went buck wild on Twitter.

People all over the country are participating in the haiku-esque word challenge. Here are a few of my favorites:

Maybe this whole time they were simply trying to thermoregulate — they've been steps ahead and we didn't even know it.

When it's this hot, skip the microwave or prolonged defrosting process, just insert frozen food into bra and wait.

This is how you know it's bad — your sweat starts reproducing.

But A Fridge Ain't One

You have to have a sense of humor when the temperature flirts with triple digits.

Honestly, though, this is genius.

Undies In The Ice Box

If Marilyn Monroe could keep her undies in the ice box, we can certainly get away with putting our bras in the freezer.

I'm OK With This

I mean, if it helps man junk to stay cool, I'm fine with it. It worked for Tarzan.

This is a crime against humanity. You've taken it one step too far, weather.

Because if the weather isn't messing with you, your uterus might as well be.

Now Is The Time

If there's ever a time to do a little body hair trimming, it's now, for the sake of heat.

Stay safe in the heat, everybody! And rejoice, because it seems that the heat dome is over... for now.