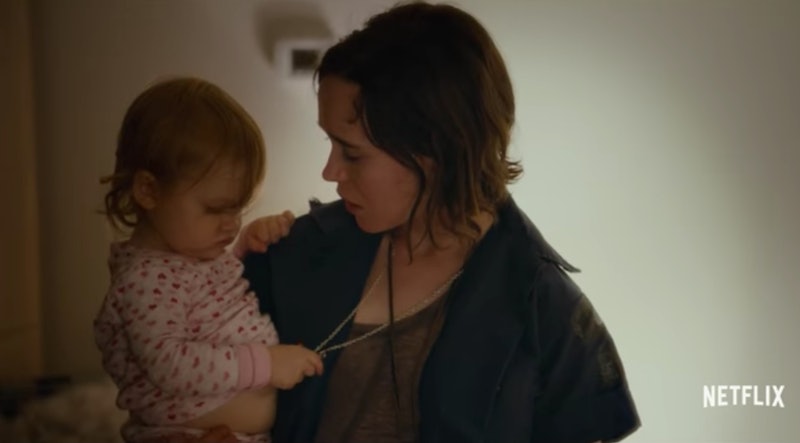 If you'd forgotten about your once-favorite Canadian-American indie movie, the pregnancy rom-com Juno, you're way overdue on a re-stream, because Ellen Page's role as Lu in Tallulah is a wee bit similar in one key aspect: Namely, that it's a dramedy centering on a baby. In the new Netflix film, she plays a woman living in a van who on entering a hotel to scavenge for food gets mistaken for hired and help and asked to look after a baby while the mother goes out partying. When she finds the baby's drunk mom passed out on a bed upon her return, Lu is forced to make a tough, spur of the moment decision. She takes the baby back to the van with her.

Upon watching the trailer the first time, I battled a tsunami of emotions. Page as a quasi-homeless lady; Tammy Blanchard as a lonely and overwhelmed trophy wife; Allison Janney as a mother whose family has abandoned her. In short, all the tears. But, upon my second viewing, I found myself beginning to wonder: how would Juno have coped if she hadn't given her baby away for adoption? Lu seems to do a crackerjack job of totally spontaneously becoming a mom, so would Juno have had the same experience?

While we're not given any concrete evidence as to how old Lu is, we could assume she's in her 20s. Juno, however, is just 16 in her film. That said, while Lu reveals in the trailer that she was abandoned by her parents as a child, Juno had a stable and loving family background. Her father and stepmother were supportive about her decision to give up her child, and here's guessing that they would have been equally supportive if she'd decided to keep it. There's one thing I doubt they would have been chill about: letting her quit high school. So here's me calling it, they would have paid for childcare so Juno could have completed high school. Education? Check.

But what about Juno's relationship with the adorkable Paulie Bleeker? The best part about Paulie is that he was really just an extremely nice guy. I'm not saying they would have lasted forever as a couple with a baby to care for (who stays with their first significant romantic partner, especially in an indie movie?), but if she'd kept the baby, I imagine he definitely would have been a present and involved father, whether or not they stayed together.

As for careers, that's easy. Juno lives for punk rock, so obviously she would try to make it in a riot grrrrl band. But ultimately, while Paulie's would be more than happy to look after Baby Juno while she's out touring, she might discover, to her horror, that she misses her kid like crazy while on the road. So while Juno never stops playing music, she cuts back on touring and takes up a new career: becoming a sexual health educator and talking to high school kids about how to stay safe between the sheets.