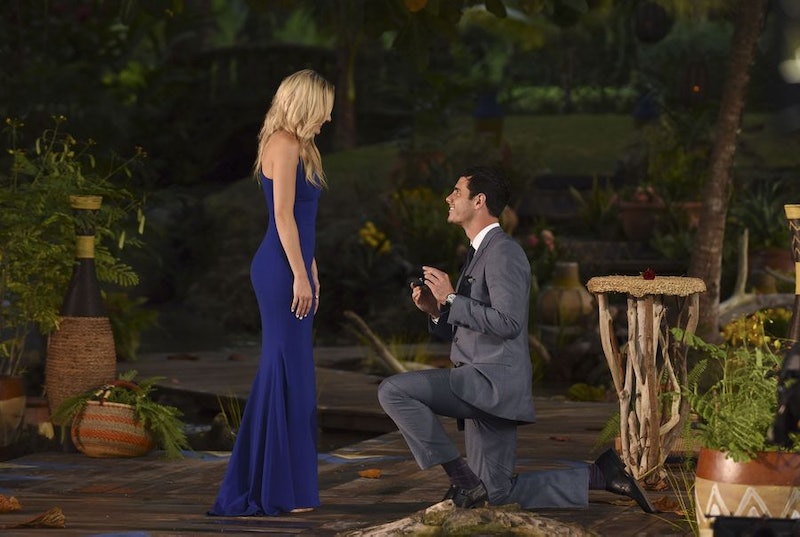 As JoJo prepares to make her final decision of who to end up with in The Bachelorette Season 12 finale, one can't help but feel a sense of déjà vu to when JoJo was on the other side of this crossroads moment during Ben Higgins' season of The Bachelor. But even though that finale left JoJo heartbroken, so far it has proven to be the right decision considering Bachelor couple Ben and Lauren Bushnell are still together and, judging by the look of things, still very much in love. Some of you may find this to be an odd statement, considering it was only a few months ago that we saw the two of them get engaged on national television. But here's the thing — it's actually been quite a while since the proposal, considering they film the season well in advance of when the show airs.

A lot can happen between then and now, especially since it's given them some time to see what it's like to be together without all the cameras around. But so far, Ben and Lauren B. are still going strong. In fact, according to People, the duo just recently celebrated their engagement with close family and friends in Portland, Oregon and seem to be happier than ever together.

Then there's Ben and Lauren's actual Instagram accounts themselves, which are chock-full of adorable photos of their time together. Now that they no longer have to hide their relationship, fans are able to get a front row seat to see how they're holding up post-Bachelor. From date nights to Cubs games and everything in-between, even diehard JoJo supporters can't deny that this dynamic duo is beyond adorable and still very much in love.

And keep in mind that this photo was taken a week ago, so this is a very accurate representation of their current relationship. Plus, let's not forget that they are also getting their very own unscripted reality series, Ben and Lauren: Happily Ever After, which will debut in October 2016 on Freeform and center around the happy couple as they prepare to tie the knot. Something tells me Freeform wouldn't put so much money and effort into a show about them if they didn't truly believe Ben and Lauren had a relationship that is built to last.

Will JoJo find that same kind of romantic bliss that these two have found? We'll have to wait until Monday night's After the Final Rose segment to know for sure. But as far as this Bachelor duo is concerned, their happily ever after could prove to be the real thing.