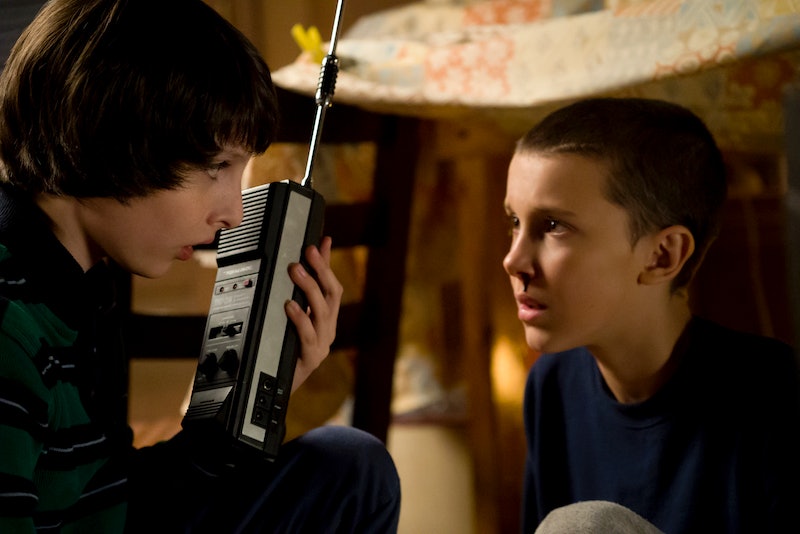 In the era of Peak TV, with its ever-increasing amount of options when it comes to show and platforms and genres and formats, it's often hard to tell ahead of time what shape any new show might take. Will it be eight episodes or 10 or 13 or 22? Will it be a continuing series or a one-off "event" series or perhaps an anthology series? If it's the latter, will the anthology be a hard reboot every year (like True Detective) or will each season take place in the same world (like Fargo) or be obliquely connected (American Horror Story)? Fans of Netflix's Stranger Things might find themselves asking some of these questions as they near the end of their binge of the show's stellar first season. Is Stranger Things an anthology? Or can we expect to see the continued adventures of Hawkins, Indiana next season?

It's easy to see why some viewers might assume the sci-fi series would be going the anthology route next season. Despite some lingering plot threads, the main narrative thrust of the season — finding Will and bringing him home — was resolved. And the title itself is ambiguous enough (not The Upside Down or A Girl Named Eleven or some such) that it's conceivable the show could tackle other, completely different "strange things" next year.

If you've gotten attached to Eleven, Mike, Dustin, Lucas, Nancy, Jonathan, Joyce, and the rest of the citizens of Hawkins… don't worry. If Stranger Things is renewed for Season 2, creators Matt and Ross Duffer fully plan to continue exploring the story they started in Season 1. "Yes. The answer is yes and yes. We definitely are hopeful to go several more seasons," executive producer Shawn Levy (Night At The Museum) told SlashFilm recently. "And the plan is to continue with this set of characters while introducing a few critical key new ones next season. So I'll just say that a lot of the big mysteries get answered at the end of Season 1, but we are very much kind of unearthing new problems and questions that merit future stories and future investigation in the most enjoyable way."

As an example of the kinds of "new problems" and "future stories" they have in store, Ross Duffer told Variety that he and his brother "have a 30-page document that is pretty intricate in terms of what [the Upside Down] means, and where this monster actually came from, and why aren’t there more monsters — we have all this stuff that we just didn't have time for, or we didn't feel like we needed to get into in Season 1, because of the main tension of Will. We have that whole other world that we haven't fully explored in this season, and that was very purposeful."

While it's clear that a hypothetical second season will continue in the same setting with the same cast of characters, there may still be a hint of an anthological nature to Stranger Things moving forward. "If we do get to go back, it's not a second season as much as a sequel," Matt Duffer told IGN. That's why they wrapped up the mystery of Will's disappearance in the first season; because they wanted it to feel "like an eight-hour movie." So when (if?) the show picks up again, it will feel like the next, separate movie in a series, rather than the second, unresolved half of everything that happened in Season 1.

Beyond any stylistic or story needs, there's a practical reason why Season 2 will be a "sequel" rather than a direct continuation: puberty. Any show that casts young children as its stars has to cope with the fact that those children will grow up — a challenge that the Duffer brothers are well aware of. "We've been talking a lot about Harry Potter," Ross Duffer said at the show's recent Television Critics Association press tour panel, "referencing the growth spurts that franchise's actors experience between films," as reported by E! Online. As Gaten Matarazzo (Dustin) eloquently put it, "My voice has dropped like four octaves." Consequently, fans shouldn't "expect Season 2 to pick up just a day or two after the events of the first season."

Aside from a potential time jump, there's one other way that the sophomore season of Stranger Things will be distinct from the first: its form and tone. "It's a different tension and characters are dealing with different things," Ross Duffer told Entertainment Weekly about their "sequel" plans. "It's going to have a different structure … All our favorite sequels feel a little different. It's not about just taking another monster and it's a bigger, badder monster. We want it to feel a little bit different, maybe a little bit darker, but still have the sense of fun that we had."

So how long will Stranger Things run, God-willing? (Or Netflix-willing, I suppose.) "We're TV fans. There are shows you fall in love with and at a certain point they lose you," said Matt Duffer to EW. "That's my nightmare. 'Stranger Things was really great the first two seasons and then I stopped watching it.' That's what I'm terrified of. The idea would be do it as long as it feels natural and organic to tell the story." Let's just hope Netflix renews the show and lets the Duffer brothers keep telling the story as long as they want to keep telling it.

More like this
Oops! The 'Stranger Things' Monopoly Game Has Spoilers For Season 4
By Alyssa Lapid
20 Photos From The 'Stranger Things' Season 4 Premiere To Make You Feel Old
By Alyssa Lapid
David Harbour Was Lily Allen’s First-Ever Date
By Frances Stewart
Grey's Anatomy Fans Refuse To Accept Kaimelia's Shocking Relationship Update
By Brad Witter
Get Even More From Bustle — Sign Up For The Newsletter