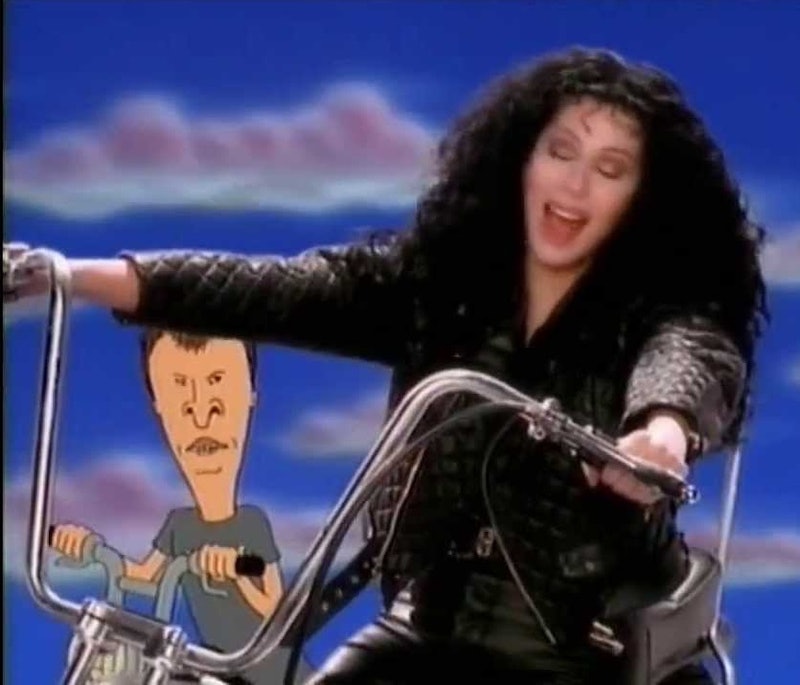 Listen, I think we can all agree that the '90s were a great time for music. It was an era which brought us the sweet nihilism of the grunge scene, a variety of perfect feminist hip-hop and an assortment of dreamy, catchy boy bands who have, frankly, yet to be topped (BSB's forever). But, amongst all of those amazing '90s songs that you'll always love are a slew of annoying '90s songs that we all listened to obsessively — maybe even still listen to because we can't forget them! Sadly, a great deal of these songs are locked tight within a vice of cringe within your brain, and it's possible that they may never leave. Many of these songs were played endlessly on the radio, at parties, or in the diner that you and your friends would hang out in on a Saturday afternoon. They feature excruciatingly catchy choruses, ludicrous premises, ridiculous melodies and the sort of accompanying dance routines that only '90s kids will remember.

Well, guys, the only way to rid these insanely ridiculous songs from your memory may be to face them directly. Make some tender apologies to your ears, your mind and your memory whilst we revisit some of the most annoying songs from the '90s. Oh, and cross your fingers with me that we can finally, possibly cleanse them from our musical palettes forever.

Just what in holy hell was going through the minds of the Baja Men when they came up with the idea for this song? Whilst I'm totally in favor of any video which makes a pack of adorable dogs it's focus, the song is permanently etched into my memory as one that kids would shout down my street for days, weeks, and months on end. Like, I just wanted to watch Nickelodeon, guys. Shut up.

The chief, sparkling goddess of '90s cringe, "Barbie Girl" sounded like the sort of musical torture that a possessed devil doll would have started singing as and when you called the Priest in to exorcise it.

Twas the song that all pre-pubescent boys would awkwardly taunt you with while they ran around in their swim shorts each summer. As if that wasn't bad enough, in all likelihood it was the song which would uncomfortably unite all of the male members of your family for a cringe filled sing-along at family parties, forcing you to hide in the toilets while your embarrassment ate you alive. Not cool, guys.

I'd like to wager that every pep rally, sports event and school assembly that you ever attended used this song as their let's hype up the crowd music, every damn time. Shudder.

Whether you loved or hated this song, all '90s kids implicitly knew this dance routine so well that they could perform it on demand, probably even in their sleep. And jeez, is the song relentless. There is no end.

6. "I Got You Babe" — Cher With Beavis And Butthead

Oh, Cher, honey — no. Like, let it be known that I wear my Cher Fan Club badge of honour with pride, but thinking that it would be a good idea to have cartoon goofballs Beavis and Butthead grunting and sniggering away in the background of one of her classic songs? Nope, nope, and hell nope.

This is essentially just a song where a man lists all the women that he likes to stare at, is it not? Keep your distance, Lou Bega. So creepy. So annoying.

As anyone who recently saw and loved kitty-action movie Keanu will agree, the George Michael classic "Faith" is timeless and totally perfect. So you know what it didn't need? An ironic nu-metal cover version of it. Fred Durst has a lot to answer for.

Look, I'm not saying that "Jump Around" is a bad song, because it isn't. It's actually pretty great. What made it annoying was the endless overplaying of it throughout the '90s and a chorus which demanded people only dance to it by jumping on the spot and spilling their drinks everywhere.

Not only is "Boom Boom Boom" a beyond dumb sentiment to be repeating over and over again within a song, but the lyrics were also way too rude for kids to be singing along to. The line "put your money on my tongue" always made no sense to me as a kid. And now? Gross, guys. I weep for my lost innocence.

Anyone who was lucky enough (or, unlucky enough) to enjoy a family vacation to Europe in the '90s will know this song way too well. It's the Freddie Krueger of dance music — once the song finds you, it doesn't give up and will play on and on inside your brain until it eventually destroys you.

Just what was everyone's obsession with jumping back in the '90s?

Nothing screamed "We're trying to make some quick, easy cash with the worst music possible," like a hoedown-inspired, two line train wreck of a song put to a dance beat.

In some ways, I kind of thing this song is pretty genius. But once that chorus opens it's jaws and sinks it's teeth into your mind, it never lets go.

There's only one word for this song — unforgivable. Seriously, Chumbawamba, next time you get knocked down. just stay down, you hear?

Hi, my name is shrill, repetitive and trying too hard to be as edgy as possible. Not so nice to meet you.

What total nonsense was this song? Like, is the guy in the song blue in an existential way? Is he suffocating? Is he a smurf? I don't get it and I don't think I ever want to either.

Damn, I really hoped that by this point in the article all of us would have banished all of these annoying '90s songs from our minds for good. But, I fear that I've only gone and further buried them in there even more. Sorry, guys. Let's just do the macarena together and call it quits, eh?