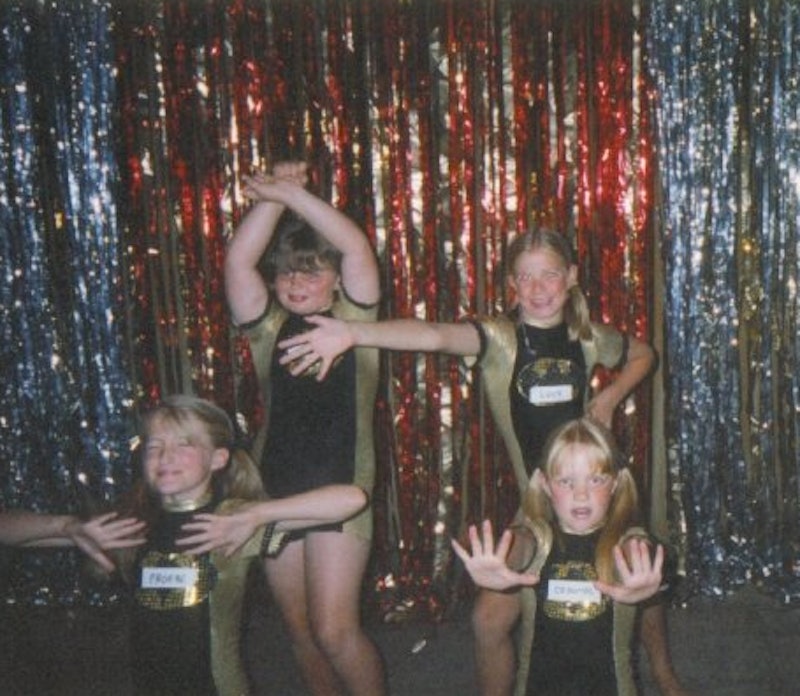 Back in the 1990s, your parents might have believed that dance class could help you make new friends, learn new skills, and even become more coordinated. So they were unbelievably proud when they received a photo of you posing with your cool 1990s dance troupe. They likely loved showing it off to anyone who stepped over your home's threshold, including the mail person.

In reality, dance class was probably a way for you to get in with the popular kids, learn to be tolerant — dealing with pre-teen divas was a serious exercise in self-restraint — wear uncomfortable but glam costumes, and grow confident enough to rock some moves at the school dance. You also learned a unique sense of camaraderie and a bunch of skills that you couldn't usually get from other team sports.

For instance, there's a certain type of pressure performers must overcome: The kind where you're standing on a dark stage, in position, and you can hear the audience on the other side of a curtain. Or the overwhelming panic the moment you or your friend forget part of the routine, forcing the other to over-compensate for a second. Even if you fought like cats and dogs, you had each other's backs as soon as your ballet slippers hit the stage.

Chances are your nostalgic '90s dance troupe photos captured the vibe of your group, and there were certain things that all of these photos usually included. Here they are.

We usually wore our typical black and pink leotards for dress rehearsals, tests, and underneath our show costumes. But when it came time to shine in front of the photographer, we sported snazzier versions with pride. The designs could range from animal print, to abstract print, and even to velvet. My personal favorite was a full-length catsuit-style leotard that came in neon pink, and had added chiffon "wings." I was obviously too cool for dance school.

This pose would always put the tallest students in the middle, the shortest at the edges, and a couple of folks kneeling randomly in front. You were probably also pulling some ballet moves with your arms to make this group pose even more impressive. Of course, you reserved this pose solely for photoshoots and the paparazzi (aka the local paper).

After a few shots had been taken of your group in the "classic pose," the photographer would get a selection of snaps in a position that was a little more alternative. The reason behind this shot was to get a more relaxed image, perhaps so parents could amass a huge collection of varied photographs of their little twinkle toes.

Even though this shot was less formal, your teacher would meticulously place you into poses that played with interesting dimensions, showcased your skills, and highlighted your costumes.

Feather boas, top hats, canes, those weird flower-covered arches you'd hold over your head: The list could go on. I imagine the logic behind this was that props made the photos look more interesting. IMO, the addition of props could make each photo ever so slightly different to the hundreds of dance troupe images your mom already had.

The majority of your dance troupe photos probably included spirit fingers or jazz hands. Unless the photo was showcasing a ballet class. In that case, spirit fingers were a definite no-no and only bras bas arms would do.

There was always one member who had a natural flair for dance and made a pirouette look like a walk in the park. This prodigy would always be placed in the center of the photo, either pulling a dramatic pose to draw attention to their skills, or being lifted by the rest of the troupe.

The star was dance royalty and the rest of you were merely peasants, but you didn't mind because you were just so happy to be part of an awesome troupe.

After what seemed like hours and hours of posing, grinning, wearing tight costumes, and trying to assemble the world's most perfect human triangle, you could no longer muster a real smile. You'd just put on your biggest, cheesiest, fake grin and no one would be any the wiser — apart from you and your troupe.

8. The Annoying Pose You Had To Hold Forever

There was at least one pose that you had to hold until your arms ached so much that you thought they were going to drop off. But you were a pro. So when the camera was turned your way, you kept smiling no matter what.

This member of your troupe always put their all into everything, but they sometimes came across as a little OTT in the photos. When they got to middle school, they probably ditched the dance class and attended glee club instead.

A photographer worth their salt would be able to catch a graceful leap in action. A very talented photographer would even be able to snap multiple mid-air leaps at the same time. Your family and friends would never guess that it took about a million attempts to get that one perfect picture.

The world was our stage. Obviously we had to wear copious amounts of makeup for our dance troupe photo. We believed that the brighter the eyeshadow, the better the image.

One thing's for sure: Amid the uncomfortable hairstyles, the smiling 'til your cheeks hurt, and the spirit fingers, dance troupe picture day was a total riot. If I could turn back time like Cher, I'd do it all over again.

More like this
23 Times Meghan Markle Dressed Just Like Princess Diana
By Bustle UK
Bella Hadid Just Wore Y2K-Inspired Pacifier Earrings
By Natalia Perez-Gonzalez
35 Ideas For 4th Of July Nails That Go Beyond Red, White, & Blue
By Audrey Noble
22 Gorgeous Wedding Manicures For Brides & Bridesmaids
By Olivia Rose Ferreiro
Get Even More From Bustle — Sign Up For The Newsletter