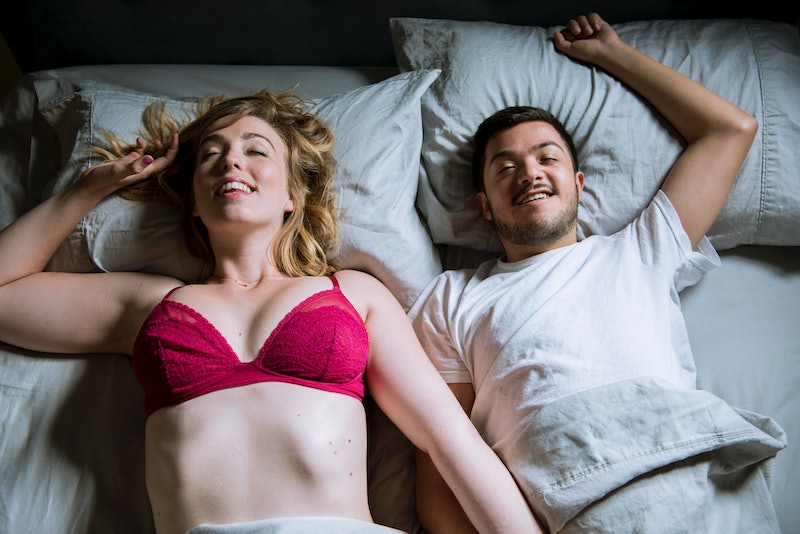 When we talk about the female orgasm, it's normally in terms of achievement. Our culture is obsessed with getting there, how we get there, if we get there. But what about the orgasm itself? There's not a lot of focus on what the female orgasm is like — and whether or not a male orgasm can possibly measure up. But the lovely people at AsapSCIENCE have decided to break down the difference between male and female orgasms — the frequency, the duration, the effects — to see if there really is a battle of the sexes and, if so, who's winning.

It's something I've never really thought about. It never occurred to me that men's and women's orgasms would have different qualities too. Whenever it comes to orgasms, you just come to expect a ridiculous sneeze face, some out-of-control breathing, and if things are really fun, maybe a weird noise or convulsion. But does it actually feel different?

Turns out, there are some definitely differences surrounding the male and female orgasm, but also a whole lot more in common than you might expect. You can check out the whole video here:

Here are my favorites parts, because female orgasms can go on and on and on:

So interestingly, the average female orgasm lasts much longer than the average male orgasm — over 20 seconds versus 3-10. But of course, men orgasm more often — the video estimates 95 percent success rate versus 69 percent for women. But hey, at least ours pack a punch.

2. Sexuality May Have More Of An Influence Than Gender

Straight men and gay men have about the same amount of orgasms, but lesbians have more orgasms than straight women — and 25 percent of gay women said they came every damn time.

3. Maybe It's The Amount Of Time Spent In Bed

It may be that lesbians have more orgasms because, on average they spend way longer in the sack— 30 to 45 minutes versus 15-30 minutes for straight couples. That sounds long to me, but maybe I should slow things down a bit. The video also mentioned that 1/3 of the probability of a woman orgasming is just down to genetics, so maybe we shouldn't jump to conclusion too soon. (I still believe the lesbian thing though.)

4. Our Brains Are In Sync

But are the actual orgasms better for a certain gender? Even though our brains do different things during arousal, men and women actually have the same response to an orgasm — in their bodies and their brains.

5. And So Are Feelings

Men and women even used the same words to describe orgasms in one study. And I have to say, "explosive", "throbbing", and "euphoric" all ring pretty true for me.

6. The Effects Are The Same

7. Even The Types Are The Same

Even things that we used to write off to one gender — like wet dreams for guys and multiple orgasms for women— we're now finding are actually experienced by both genders.

Basically, your own anatomy, psychology, and more may have a larger effect on how often you orgasm and how they feel. Don't get bogged down on what your gender is — focus on your own personal needs and enjoy the ride.