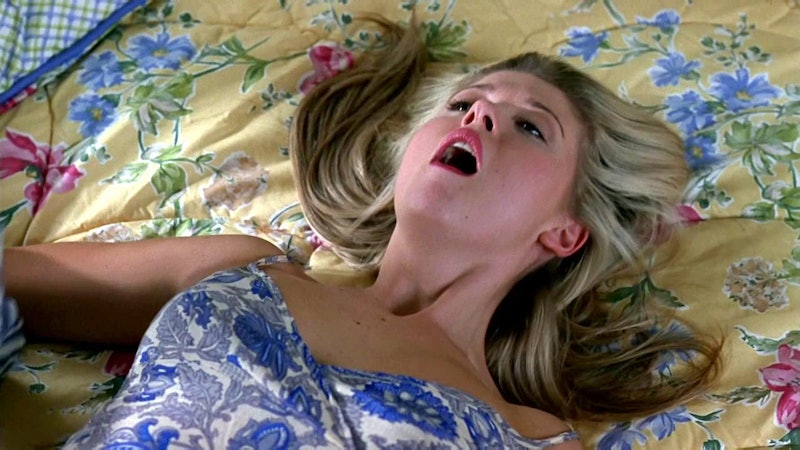 The female orgasm can be a sneaky, elusive little thing, with many women wondering how to experience it during sex, or if that's even possible for them. When it comes to having an orgasm with your partner, there are two different approaches you can take. You can do the stuff everyone promises will absolutely give you an orgasm, or you can do the stuff that actually works for you. But sometimes, it can be hard to tell the difference. It often feels like every 10 minutes, there's another article by another expert who has come up with four new, no-fail, 100 percent orgasm-guaranteeing positions that will work for all women (girl on top, doggy-style with vibrator, headstand during a full moon in January, missionary while wearing Dr. Seuss hat). When these methods fail to make rainbows shoot out of our crotches, a lot of the time, we end up blaming ourselves for doing them "wrong."

But there's no such thing as a "no-fail" orgasm technique that will work for every woman — we're all built differently, we like and dislike different things, and we have different vaginattention spans. The only way we can figure out what works for us is to conduct our own research, and then come to our own conclusions (luckily, conducting this research is usually pretty fun).

So to encourage you in your future fact-finding endeavors, we surveyed 39 different women on how they really like to get off with their partners. Use their answers for inspiration, motivation, or to help you plan your Saturday. And remember: The only "right" method of getting off is whatever method gets you off.

"There is definitely no surefire way to orgasm for me — but the maneuver that always has the most success is oral. No question. During intercourse it's a gamble, but me on top raises the odds because I have more control."

Three other women also pointed to oral sex as their number one way to get off.

"110% when he's holding my legs above me as I'm on my back. Something about this position hits the spot every. Single. Time (YASSS)."

"Dirty talk. But by dirty talk, I mean 'Don't ever leave me' or 'I'd kill for you.' Gothy things like that."

"Cowgirl / reverse cowgirl. Also, if there's a lot of foreplay before actually doing it — at least 15 minutes worth."

Six other women also reported that girl-on-top was their go-to strategy for getting off with a partner.

Three other women also singled out clitoral stimulation as their one-way ticket to Pleasure Town.

"Licking my nipples and speaking in a sexy voice. Like, it almost doesn't matter what you say, as long as it isn't racist, homophobic, sexist, involves calling you 'daddy,' or seeking validation. Other than that, you could basically be reading me the stock report, but if your voice sounds like the Dow knows exactly what I want and plans to give it to me, then whatevs, man. Let's do this."

"My clitoris needs such intense stimulation that vibrators are pretty much the only way to go for me. I'll usually include getting off with one as part of foreplay, and then maybe use it again after my boyfriend comes, if I feel particularly energetic."

"I think clitoral and nipple stimulation from behind is the way to go. There's a very particular intensity to it that just doesn't come to fruition if I'm looking at the person. Maybe it's more mysterious or raw or risque. I don't know, really. But it's a win."

"Touching my clit while on top with my hand or a small vibe, or doing the same with my legs on his shoulders or doggy-style."

"Going down on me and throwing some fingers in there is like the damn Konami code."

"It's been so long, I forget. Put your penis inside of me? JK ... To be honest, I'm all about the clitoris (so think oral or me touching myself during sex), unless you're just one of the chosen ones who can give me an orgasm vaginally. And that's not about size or even necessarily method. Just every now and then I meet some special unicorn (not literally ... ew) who's able to make it happen."

"Legs held back by my partner."

"Missionary, with legs on partner's shoulders."

"Oral. Or being on top and some grinding."

Cheers to you, Effie!