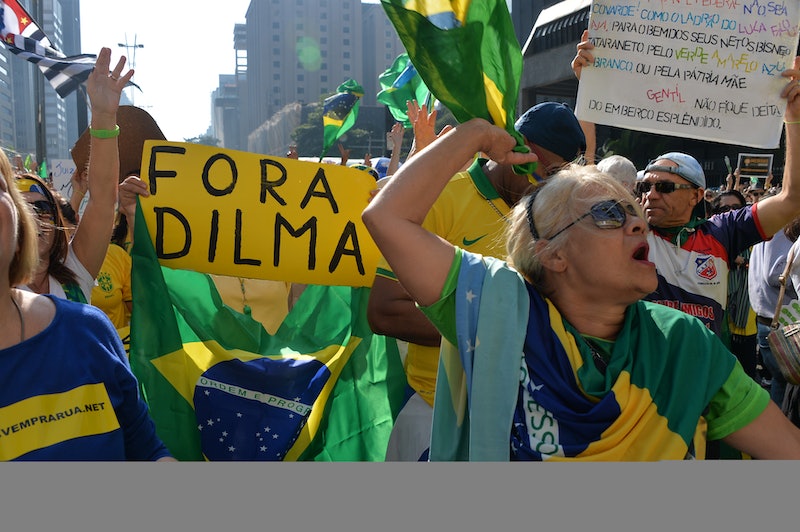 The 2016 Olympic Games are coming up, with the opening ceremony scheduled for Aug. 5. Athletes from around the world started making their way to the Olympic Village in Rio over the weekend. At the same time, thousands of local residents took to the streets in protest. But why are Brazilians protesting days ahead of the Olympics?

Thousands of Brazilians have hit the streets in Rio de Janeiro and Sao Paulo over the last week to call for the impeachment of President Dilma Rousseff and the prosecution of Luiz Inacio Lula da Silva, the previous president. Specifically, protesters in Rio acted in opposition to Dilma and Silva, while those in Sao Paulo came out in support of them, as well as their Workers Party. Since 2014, Dilma has been the subject of a scandal which allegedly contributed to Brazil's ongoing financial crisis, in which she reportedly broke "government budget laws." Silva, on the other hand, was charged with obstruction of justice and corruption last Friday for his role in a scandal involving a state-run oil corporation. He was accused of embezzlement.

So what does any of this have to do with the approaching Olympic Games in Rio?

Well, for starters, these ongoing governmental scandals have been associated with the left-leaning Workers Party — which has been in power for the last 12 years — by the Brazilian media, rather than focusing on bribery and corruption within the government itself. And with the current economic crisis facing the country, the unfinished infrastructure necessary to host the Olympic Games, the Zika virus striking impoverished communities in the country, and the lasting economic effects of the 2014 World Cup, some have expressed concern that the Olympics are a waste of money and could encourage a coup. Rio hosting this year's Olympics has been viewed unfavorably among half of the country's population.

According to Reuters, Rio de Janeiro is one of the country's most indebted states, and has been hit especially hard by recession, which resulted in an unemployment rate of over 11 percent. Additionally, Forbes reported that 63 percent of Brazilians believe that the Olympics will bring "more harm than good" to the country.

So maybe hosting the 2016 Olympics in Rio wasn't the best idea, given the deep economic and political struggles facing Brazil at this time. Last week, a group of protesters in Angra dos Reis extinguished the Olympic torch as it passed through the city. The act only solidified the discontent of the Brazilian people over hosting the Olympic games this year, when there are currently so many infrastructural, economic, and political issues that should have been addressed and reformed before any more games came to the country.

More like this
The Families Of Grenfell Tower Are Still Waiting For Justice, Five Years On
By Bustle UK
Boris Johnson’s Leadership Is In Question – Again
By Bustle UK
How To Fight For Reproductive Rights, Based On How Much Time You Have
By Courtney Young
5 Ways To Stand In Solidarity With Women In America From The UK
By Sophie McEvoy
Get Even More From Bustle — Sign Up For The Newsletter