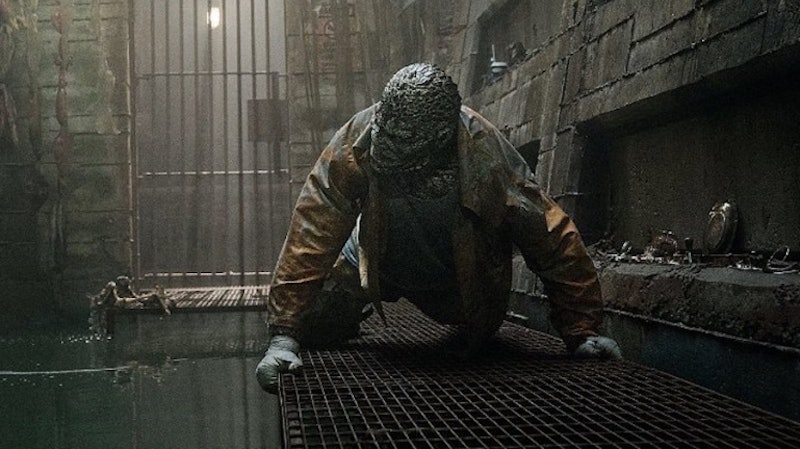 In a movie about all sorts of outcasts, Killer Croc may be the ultimate weirdo. The basic plot of the DC ensemble showcase Suicide Squad is that a take-no-prisoners intelligence officer recruits the most dangerous criminals in the system to complete a secret project. Among them is Adewale Akinnuoye-Agbaje as Killer Croc, given name Waylon Jones. As you can see from the photo, the criminal's nickname is well applied. Jones absolutely looks the part of the reptile he's named for, but is that where the similarities stop? Killer Croc's powers make him dangerous to other humans, but also an asset to this "suicide" mission.

Like the rest of the "Squad," Killer Croc is a character who has his origin in DC comics. According to the DC Database, Killer Croc made his first appearance as an enemy of Batman in a 1983 book. His "powers" are more akin to a genetic disorder. Croc is born with reptilian features that cause him to be mocked and even abused as a child, increasing his jealousy and bitterness towards average humans. The supervillain has also turned up on television, in animated films, in video games. Suicide Squad marks his live-action movie debut.

Neither Akinnuoye-Agbaje or director David Ayer are giving much away about the character's Suicide Squad origin story and how it might differ from his comics background. In some cases, Jones becomes increasingly animalistic as a subject of cruel and irresponsible scientific experimentation. What I do know is that this version, like the others, will possess super-strength and heightened senses. He's also nocturnal, like his namesake. Jones may look and behave in many ways like a deadly reptile, but he's still fundamentally a man. And that makes his taste in sustenance taboo, even for this group. Killer Croc is a cannibal.

My only exposure to cannibals in pop culture is via Hannibal Lecter: a monster, but a refined one. Waylon Jones's manners aren't as well-developed. And Akinnuoye-Agbaje did considerable research to be sure that his Croc came off as "hangry" for flesh as necessary. He did his homework on real-life cannibals, which goes above and beyond the call of an actor's prep duty, in my opinion. Akinnuoye-Agbaje told ScreenRant:

I did a lot of research on cannibalistic habits from back to the Mayans and the Aztecs, right up to modern-day cannibals. There’s [a video of] this guy that I’d play every single day, and I have it right on my phone. It’s a Japanese cannibal, Issei Sagawa, who ate a French model. As sick as it sounds, the moment I start to play that video, I’m in the form of Croc, because it’s really important for this creature to be thirsty for flesh, even when he’s around the Squad.

Akinnuoye-Agbaje also pointed out that, because of his troubling backstory, serving alongside these other misfits gives Jones confidence he's never had before. "He’s actually in a good space," the actor told ScreenRant about Croc's status with the Squad. "He probably wouldn’t even eat them." Coming from a people-eating, super-powered reptile man, that's a high compliment.