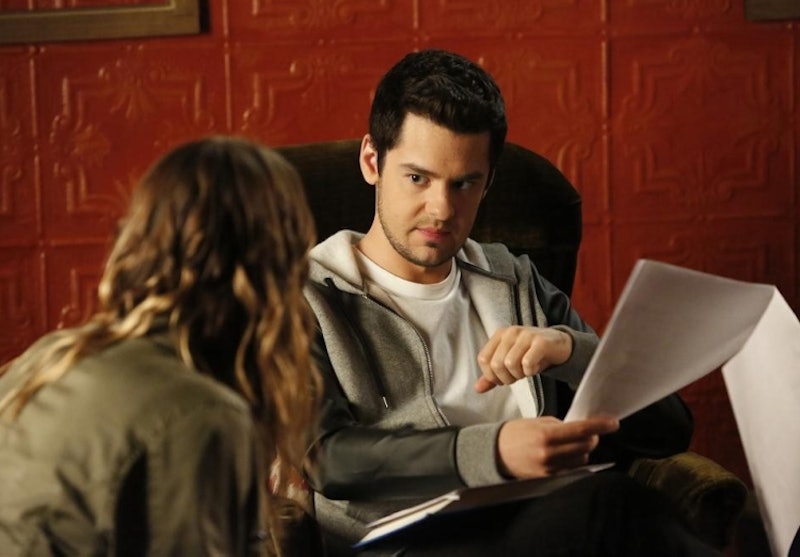 We're getting down to the wire on Pretty Little Liars, which means that someone is finally going to be revealed as the show's baddest Big Bad — otherwise known as Uber A or A.D. The elusive villain is seemingly out to avenge former Big A Charlotte's death, but, just as with every version of A before this one, the new baddie is also out to make the Liars' lives totally miserable. Though the show has set up so many suspects to cross off the list, there's one person that I still don't trust has the Liars' best interests at heart, and that's Lucas. Could Lucas be PLL 's Uber A? He might be one of the Liars' "friends" who has way more motivation to torture the Liars than we think he does.

I've long been suspicious of Lucas, mostly because of the animosity that Lucas had for Alison since she was his high school torturer. Alison was awful towards Lucas, and A was awful towards Alison. Though I think it's safe to say that Dr. Rollins isn't the real Uber A, as Uber A seemingly hasn't been revealed yet, it's very likely that Uber A used Dr. Rollins as one of their pawns. And who has Dr. Rollins hurt the most? The very person who Lucas despises — and the person that, in Season 2's episode "The First Secret," Lucas said this about.

There are plenty of reasons why we should have suspected that Lucas in the past, but we shouldn't forget that Lucas plays a very big role in Season 7 — no matter how little screen time he actually has. Lucas has acted as Hanna's benefactor since she returned to Rosewood, which, oddly, was around the very same time that Lucas himself decided to return to deal with some new property he picked up in town. It's odd that Lucas would choose to stay in Rosewood, a place that seemingly made him so miserable, and even odder that he would try to keep Hanna locked in town by putting her up in an apartment and giving her a place to work. Perhaps his motives aren't about kindness, but about making sure that he can torture the Liars as much as possible by keeping them under his thumb. After all, can it be a coincidence that Uber A was able to hack into Lucas' fire place and barbecue Aria?

The new sneak peek for PLL episode "Wanted Dead Or Alive" could hint that Lucas is involved in the Uber A action. In the episode, Hanna is talking to the phone with Lucas about her business plan, when she has to hang up to go meet up with Aria. Not even moments after she hangs up, a burner phone in her purse begins ringing, and a man's voice on the phone says "Before you bury someone, make sure they're dead." Though the voice is supposed to be Dr. Rollins, it doesn't quite sound like him — could it be Lucas putting on an accent?

Lucas could be the person hiding in plain sight, and the one person that the Liars don't think to suspect.