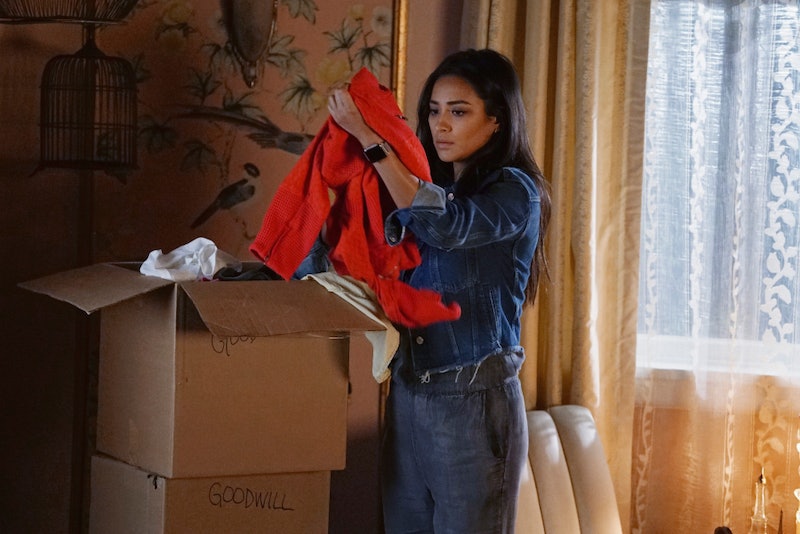 All good things must come to an end, and, sadly, Season 7 will be the end of Pretty Little Liars as we know it. That's why it's appropriate for the potential final season of all of this A craziness to be as bananas as possible — you know this show won't end until it's made our jaws hit the floor multiple times over. Though we aren't even halfway through the final season yet, there are already so many crazy moments of Pretty Little Liars Season 7 that it's hard to believe that the show's season finale will be able to top them.

Of course, this is Pretty Little Liars we're talking about — the very show that introduced a secret identical twin, faked characters' deaths multiple times over, and created Mission: Impossible-style masks so that anyone could wear the face of another character. Pretty Little Liars consistently surprises its audience, whether it be with a reveal that a friend is actually an enemy, a mysterious murder, or just a super steamy hookup session, the only thing that should surprise PLL fans is a lack of jaw-dropping moments. So what crazy moments totally threw us for a loop this season? Here are the top 16 moments that blew our minds in Season 7... so far:

After the Liars see a body dangling from the bell tower, they run over and pull down what they think is Hanna's body — except it's not. Instead of it being Hanna's body, it's a mannequin wearing a hyper-realistic mask of Hanna's face... and underneath that face is a doll face. Creepy doesn't begin to cover it.

Charlotte's dollhouse was definitely scary, but Hanna's kidnapping in Season 7 was no game. After being taken and locked away by the mysterious Uber A, Hanna is tortured with a cattle prod and sprayed with water. In addition to being absolutely crazy, it's also one of the darkest moments the show has offered.

3. Mary Drake's Past Is Revealed

After the Liars discover that the deceased Jessica's identical twin Mary was involved in the death of a child she was babysitting, Mary explains that Alison's mother Jessica tricked her into taking the blame for the horrible incident. Whether Mary is telling the truth is still up for debate, but it's by far the most disturbing backstory we've received for a character.

After learning that Alison may have been the one who killed Charlotte, her husband, Dr. Rollins, decides to torture her in the mental hospital, essentially giving her so many drugs that she starts hallucinating. It's no wonder Emily thinks that Alison could be guilty of murder.

Just in case you forgot that Alison is a total fighter, I bring you this scene.

6. When Alison Got The Hannibal Lecter Treatment

Ugh. There's something particularly disturbing about a man making sure that his wife can't speak. Serious horror movie vibes here.

8. When We Realized Charlotte Was Still Playing The Game

Aria and Hanna went to Amish country in order to visit Dr. Rollins' "farm," only to realize his family never actually owned one. Instead, the girls came across an Amish girl whom Charlotte had given dolls to — and, unsurprisingly, they were all named after the Liars. Looks like Charlotte wasn't exactly "better" after all.

9. When Dr. Rollins Went Through The Windshield

Yikes. In an effort to save Alison from her evil husband, Hanna drove her car right through Dr. Rollins — and was left staring at his bloody body for far too long.

10. When Alison Did Some Grave Digging

Alison is pretty comfortable with freshly dug graves, given her time hanging out in one, but her casually pulling out Dr. Rollins' Welby badge is a whole other level of creepy.

Though I would send zero life boats to the sinking of the Spaleb ship, this scene in which Caleb tries to win Spencer back through the chain locked door is heartbreaking. It's also heartbreaking for Hanna, who had to listen to the whole thing go down.

Spencer takes "finding an alibi" to a whole new level.

13. When We Realized Jenna Is Connected To Dr. Rollins

14. When Sara Teamed Up With Jenna

Welp, this pairing was inevitable. (Real talk, though: who cringed when Sara asked Jenna if she was a "sour girl"?)

15. When Ezra Proposed To Aria

Ezria shippers finally got their wish, and it came at the most random time ever.

16. When Noel Came Back To Town

Here's hoping that the rest of Season 7 is packed with just as many crazy moments. But who are we kidding? On PLL, crazy is inevitable.