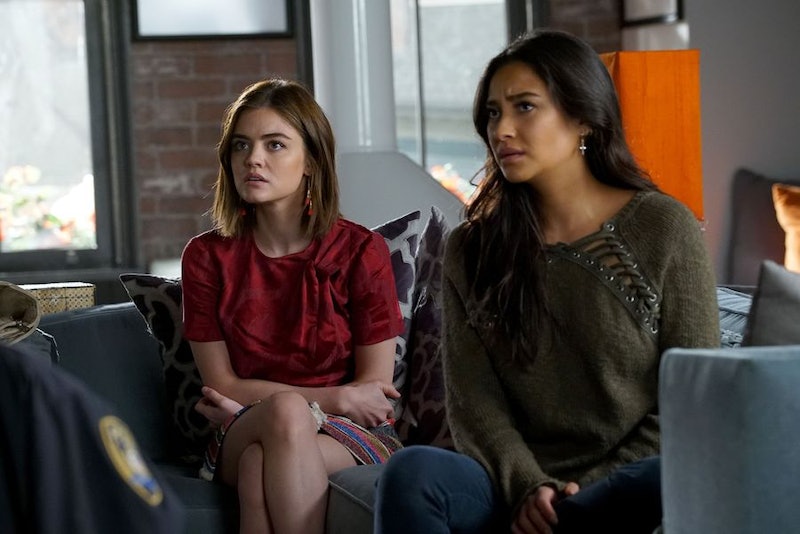 The town of Rosewood just can't go more than a few weeks without a murder. According to the official synopsis for the July 2 episode of Pretty Little Liars , " Wanted: Dead or Alive" the Liars are once again in a world of trouble as the Rosewood P.D. raises suspicions that they were involved in Rollins' death. Plus, we'll learn "part of" Jenna's plot and her new partner in crime. The synopsis concludes with a casual mention of another upcoming murder: "Meanwhile, someone is murdered for playing with the wrong team." So, who's going to die on Pretty Little Liars?

The new A team has no shortage of members — but Rollins is dead, Uber A's identity won't be revealed until the finale, and I highly doubt Mary Drake will be killed off this early in the season. But, when it comes to helpers, fans have theories for days about who may be working with A.D. and Mary — and it could cost one of them their life. Of course, the other possibility is that someone like Mona, who seemingly switched from the A team to the Liars' team, will end up dead.

So, let's take a look at four people who could die on Pretty Little Liars:

I know, I know — as far as we know, Bethany is dead after being struck with a shovel by Mona who believed she was attacking Ali. (Just think of how much tragedy could have been prevented that night if it weren't for that awful yellow tank top.) But let's not kid ourselves — very few people are actually dead on Pretty Little Liars and the Rosewood. P.D. needs to seriously rethink their death certificate process. Amidst wild speculation of who Spencer's twin may be (if she even has one), Bethany seems like the most likely candidate. We've never seen her face and she could have easily dyed her hair blonde.

And, I wouldn't be surprised if she joined the A team — Charlotte may have been lying during the "big reveal" and the two could have remained friends. She may have been recruited by Mary Drake or Rollins and spent most of this season "hiding in plain sight." If she wants out, someone else from the A team may kill Bethany in order to protect themselves. Alternatively, someone may uncover the truth about Bethany and murder her in an attempt to protect the Liars.

It's been clear all season that Sara is back in Rosewood for a sinister reason. Based on what we saw during the last episode, she and Jenna will bond over their shared hatred of the Liars. There's just one problem — Charlotte and Jenna hated each other and Uber A's main motivation appears to be avenging Charlotte's death. If her or she discovers that Sara has partnered up with Jenna, it seems likely that Sara will be murdered. Alternatively, Jenna may be totally playing Sara to get as much information as possible from her — and then she or another member of the A team will kill her once they've gotten everything they need from Sara.

If there's one thing we can all agree on, it's that Lucas is super shady and is most likely a member of the A team. Someone like Ezra, Toby, Caleb (wherever he is), or one of the Liars' parents may find out and kill him because, at this point, they all must be really sick of seeing their loved ones stalked and tortured.

Lastly, there's the enigmatic Mona who seems to be trying really hard to gain the Liars' trust and friendship — but she'll always be suspicious. She may be doing all of this so they'll confide in her and give her information that will be valuable to the A team. But, I think it's more likely that she has quit the A game and is trying to make amends — so, if she switched from the A team to the Liars' team, that automatically puts a target on her back.

Personally, I'm betting that Sara Harvey will be the one to die — but anything can happen on this show, so we'll just have to wait and see.