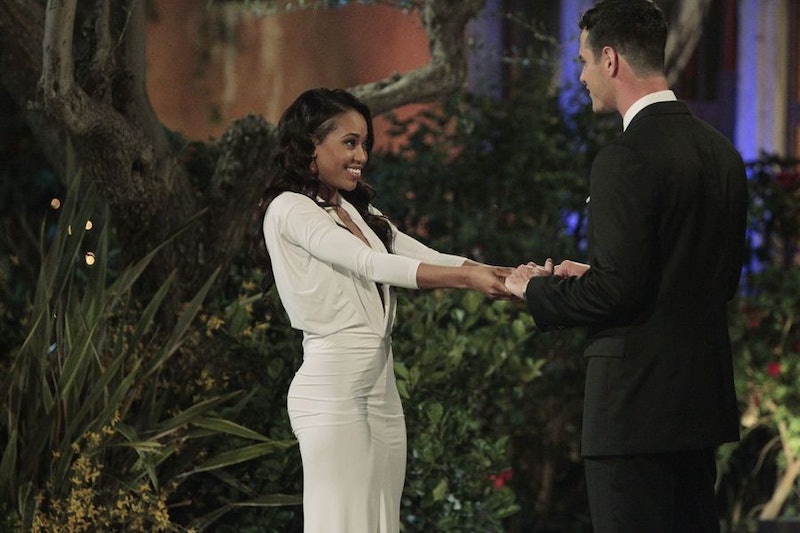 Bachelor in Paradise premieres on Tuesday night and Jubilee Sharpe is among The Bachelor and The Bachelorette castoffs looking for love in Mexico. Jubilee gave it a solid shot with Ben Higgins, who ended his season earlier this year with an engagement to Lauren Bushnell. Before you dive into Bachelor in Paradise, I figured it was a good time to recap Jubilee Sharpe's time on The Bachelor and what exactly happened between her and Ben. The 24-year-old war veteran was eliminated by Ben in the fifth episode of the season during in Mexico City.

But don't worry, she doesn't have any hard feelings. "While I was on there, I definitely had strong feelings of like for him, and I still think he's a great guy," Jubilee told Entertainment Tonight during the filming of the Women Tell All special. "[Ben] came out there and he did this whole process the best [he] could. Obviously, no one's going to do it perfectly, and he didn't do it perfectly, but he did a pretty damn good job." And, now, Jubilee is headed to Bachelor in Paradise to see if she can find love with someone new from the Bachelor-verse.

But first, get up-to-speed on Jubilee's experience on The Bachelor below.

Jubilee made her Bachelor debut like most do — emerging from the limo and trying to make a good first impression. She admitted to him that she was super nervous — so much that she had forgotten the pickup lines she wanted to use on him. Ben wanted her to try at least one, so she went with "I'm having trouble breathing, but I can't figure out if it's because this dress is so tight or because you just smiled at me." Ben laughed in response.

During Week 3, Jubilee got selected for a one-on-one with Ben and she was understandably excited, but it ruffled some feathers in the house as Jubilee and Ben left for the date in a helicopter — you know, no big deal. They traveled to the Cal-A-Vie Health Spa Vista, where Jubilee tried and hated caviar and announced her relatable obsession with hot dogs. She opened up further over dinner, telling Ben about the death of her biological family in Haiti. Ben gave Jubilee a rose.

The rest of the women in the house weren't pleased about Jubilee getting a rose. While she was on the date, most of the women had commented that Jubilee didn't seem thankful to be on the date. At the cocktail party later, she comforted Ben with a massage after he received word that two family friends died in a plane crash. The women confronted Jubilee about stealing that time with Ben when she already had a rose and it set off a very emotional chain of events which led to Ben comforting Jubilee as she cried in a bathroom.

While on a group date in Las Vegas, the women participated in a talent show at The Mirage. Jubilee showed off her talent at playing the chello.

During a group date in Mexico City, Jubilee got jealous during Spanish class. Later, the women were tasked to prepare a Mexican dish, which Jubilee excelled at, but it wasn't enough to impress Ben. Later that night, he took Jubilee aside with concerns about her distance and standoffishness toward him while on a TV show that's about, you know, winning him over. He decided to eliminate her.

"I think I just want you to tell me that you see something [between us]," she told him. Ben responded, "It would be unfair of me to tell you that something could exist."

On Women Tell All

Host Chris Harrison asked Jubilee about the drama she experienced on the show, and she chalked it up to being a new experience for her. "I had a couple of altercations, I'd call them," she said. "I think I was misunderstood. I'm a little different, as you can all see."

For her take two on reality TV, tune in to see Jubilee on August 2.