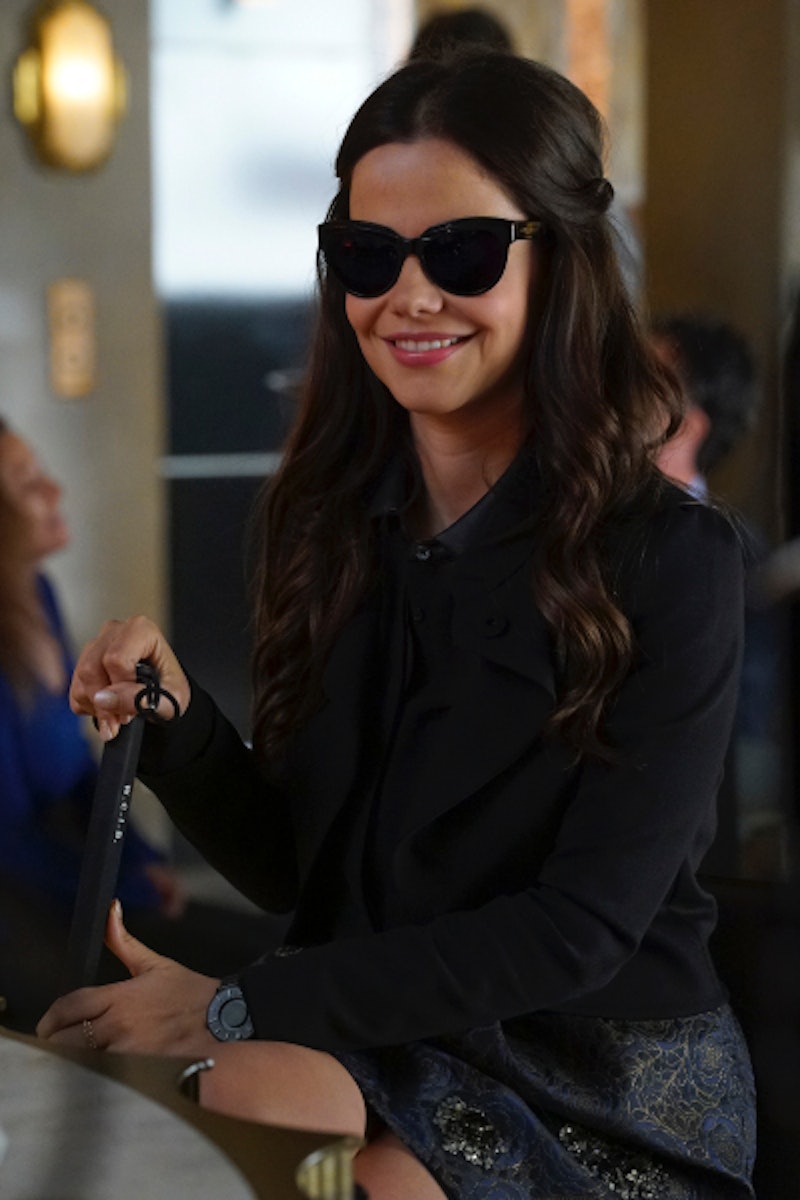 One of my favorite characters has returned to Rosewood — I am, of course, referring to Jenna Marshall. (Personally, Shower Harvey is not a character I was clamoring to see again — but it looks like we're not rid of her just yet.) Amongst the many shady characters on Pretty Little Liars, Jenna is one of the most complex — and not just because we're constantly wondering whether or not she's actually blind. It's been clear from the moment she returned that she's up to something — but it's really anyone's guess what that "something" may be. So, let's take a look at a few theories about Jenna on Pretty Little Liars.

She obviously has a major axe to grind with Ali and the Liars — and she was terrified of Charlotte, who we then knew as CeCe Drake. Plus, it appears that Jenna has stayed in close touch with Noel Kahn (another suspicious character) and she immediately buddied up with Sara upon her return to Rosewood. It seems like Jenna will continue to play a prominent role for the rest of Season 7 — so let's take a look at some possible reasons she'll be so important the plot.

Jenna and Charlotte weren't exactly the best of friends — and, what I mean by that is they absolutely hated each other. Charlotte called Melissa Hastings during the time jump and threatened to reveal her involvement in Bethany Young's death. Could she have made similar threats to Jenna? Her biggest secret (that we know of) is that she attempted to seduce Toby and then threatened him when he rejected her advances.

But, she may have bigger secrets than that and Charlotte was all-knowing. If Charlotte threatened to reveal an even more damning secret, that could definitely have given Jenna a motive to come back to Rosewood and kill her. The biggest clue is that Charlotte died after being forcefully struck on the neck with a hollow, square object — and that sounds a whole lot like Jenna's cane. (In this scenario, we can definitely assume that she's not blind and, once again, is lying about her vision.)

Remember when the N.A.T. Club was a huge deal in early seasons of Pretty Little Liars and then the plotline basically got abandoned? I'm really hoping that Season 7 brings the show full circle and resolves some of those lingering questions and mysteries. As a refresher, the club was founded by Jason, Garrett, and Ian — which means that Jason is currently the club's sole survivor. However, Melissa, Jenna, and Charlotte had ties to the club and they all have one thing in common — they're super shady.

When Spencer gained possession of the club's thumb drive in Season 1, it had some pretty damning footage of Jenna seducing and threatening Toby. Plus, according to Peter Hastings, Melissa abruptly left Rosewood because she began receiving threats before the Liars did. In a flashback scene, Hanna and Melissa ran into each other in London during the time jump and we learned that Charlotte had threatened to reveal Melissa's role in Bethany Young's death. Charlotte's dead, but someone else involved in the N.A.T. Club may have threatened to reveal Jenna's secret. So, she could have come back to Rosewood to seek revenge — and, in doing so, hopefully we'll learn the real deal about the N.A.T. Club.

I really hope that Uber A is a character who has been present since Season 1 — not only does Jenna fit that criteria, but it's obvious that she's never forgiven the Liars for the prank that went awry and blinded her. Plus, this new Uber A knows a whole lot about the Liars' pasts. Of course, the only part of this theory that doesn't quite add up is that Uber A is seemingly hellbent on finding Charlotte's killer and avenging her death. Still, nothing is ever as simple as it seems — so Jenna could simply be using that as a ploy to bring down the Liars.

Regardless of where Jenna's storyline is headed, her return to Rosewood will definitely be key to solving at least one or two mysteries.