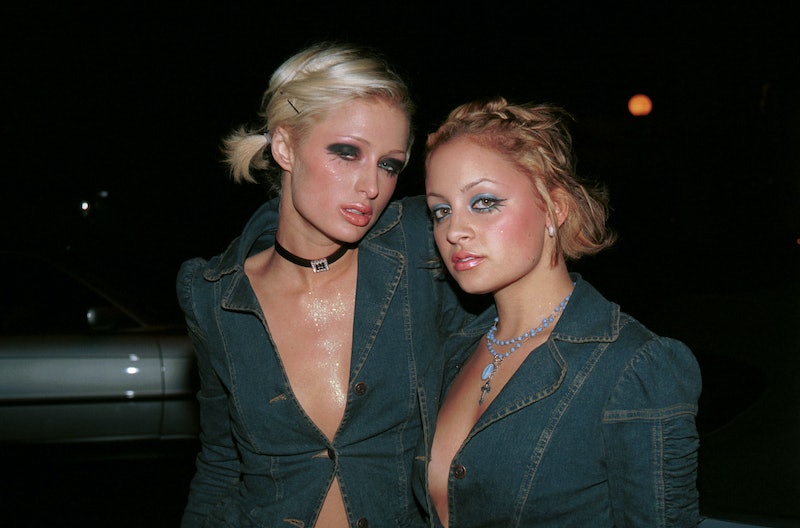 Her certified style icon status is undeniable, but Nicole Richie's early 2000s outfits are something else entirely. From the Simple Life days to her now-iconic lilac crop and killer one-liners in reality show Candidly Nicole, it’s hard to believe Richie was known for being little more than Paris Hilton’s sidekick at one point in time. Despite often being photographed donning (amazing) matching outfits both on-screen and off, the pair did differ when it came to their sartorial choices.

In the years that followed that golden era between 2000 and 2005, Richie has been lauded for her own fashion-forward thinking, and has gone on to appear as a guest judge on two of the most fashionable shows on TV: Project Runway and RuPaul’s Drag Race. She's also been designing her own successful clothing brand, House Of Harlow.

But still, nothing quite compares to those days of early stardom. Never one to shy away from controversy — from outfits that revealed almost everything to tapping into the decade’s most iconic trends — Richie switched it out from trashy mini-dresses and body glitter to channeling Cher in Clueless, posing alongside farmyard animals, freeing the nipple, and doing everything in-between. Below are just 11 of her many unforgettable looks from the early naughties.

Many of Richie's most recognizable looks were accompanied by a matching outfit of once partner-in-crime and BFF Paris Hilton. This double denim ensemble, however, is now so iconic that it deserves to appear in history books.

Channeling a '70s groupie via the early '00s, Richie may not have ever been in the band, but she was certainly riding in the back of the tour bus. This matching eyeshadow and cut-off, vintage-look tee combo still gives me all the feels.

Championing cutting up all your clothes, I hold this image personally responsible for more cut-outs creeping into my daytime wardrobe during the best part of early millennium.

Who ever said head to toe yellow couldn't be a look?

I'm pretty sure this outfit echoes most of my pre-teen ensembles worn between 2000 and 2005. From the cartoon print-tee to bootcut flairs and the extreme toe point, this sweet yet sassy outfit was recreated by girls everywhere.

The reigning queens of promotional photography, only Richie and Hilton could make posing with a color coordinated cow seem covetable.

Tweed hats, clip-in extensions, and backless dresses aren't three items of clothing usually thrown together on the red carpet. But for hiding your hair extension clips, a combo like this does just the trick.

If you didn't own one of these jelly matte-plastic totes in the early '00s — aka the chic younger sister of '90s blow-up bags — you were truly missing out.

Channeling the genius wardrobe of Cher from Clueless at this talk show appearance, this diamanté choker would be a more than welcome addition to my 2016 summer wardrobe.

Marilyn Monroe is still with us, guys.

Many of Richie's early '00s outfits were the epitome of early millennium trash (and I mean that in the most complimentary way possible), but this low-cut evening dress represented everything great about the era: Cheap fabrics worn in the classiest way possible.

With all things early '00s appearing in our lives more frequently than they have since the time-of, I for one will be channeling Queen Richie's fashion choices as the decade makes a comeback. You can find me sticking on my Simple Life boxset and trawling eBay for one of those jelly handbags for the foreseeable future.

More like this
Here Are All 703 Outfits Rachel Wore On Friends
By Kat George
Dua Lipa On YSL Beauty, Plus Her Fearless Approach To Hair & Makeup
By Erin Stovall
Kourtney Kardashian Just Wore The Coolest Silver Mesh Set
By Allie Fasanella
Lizzo Is Here To Remind You That Hot Girl Summer Lasts All Year
By Dominique Norman
Get Even More From Bustle — Sign Up For The Newsletter