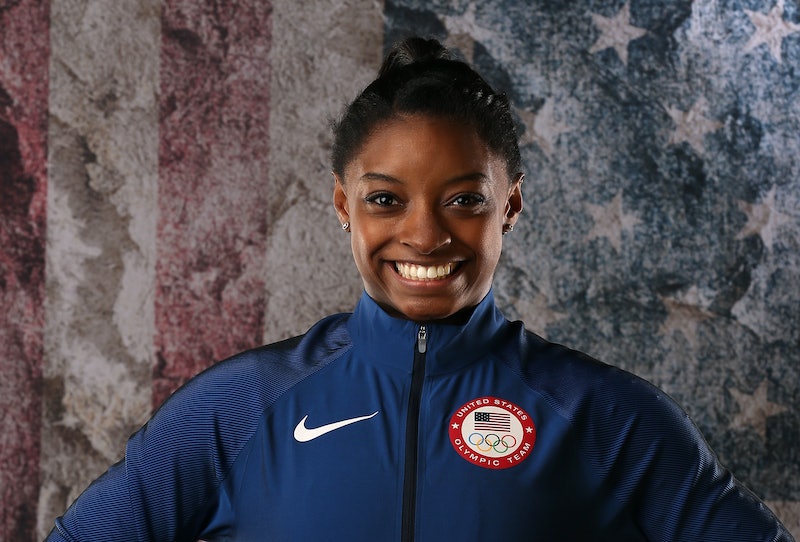 The Wall Street Journal is already saying that female Olympians will be carrying the torch for the U.S. team. Not that it will be the first time. Back in 2012, the U.S. women won more medals than the U.S. men for the first time in the country's Olympic history. The newspaper is already predicting this will again be the case for the Rio games — the first to be held in South America.

From the ladies of the gymnastics team to fencer Ibtihaj Muhammad to swimmer Katie Ledecky, women are gearing up to make history in their individual or team events this time around. Who wouldn't want to see that? This list will focus on 11 female Olympians you're going to want to look out for, so get ready to set your DVRs. History is definitely going to be made, and you're going to want to have the ability to rewind again and again.

The 30-year-old New Jersey native is making history for being the first Muslim woman who wears a hijab to qualify for the United States Olympic team. As the Los Angeles Times reported, a half-dozen female athletes wore traditional headscarves at the 2012 London Olympics, but it hasn't always been easy for Muhammad. “I would get stares,” she told the L.A. Times. “My skin color, my religion, made other people uncomfortable.”

It's part of the reason why she chose a sport where she would be covered and wouldn't have to look different than anyone else. Muhammad, who is also the co-owner of Louella, a modest clothing line inspired by her mom and grandmother, now hopes to be a voice for Muslims, speaking out about her religion on the world stage, telling the newspaper, “I have a very short window as an athlete and I’m going to try to take advantage.” The first-time Olympian, who earned a dual international relations and African-American studies degree from Duke University, added, “I’m hoping to change the image that people may have of Muslim women.” Whether she wins gold or not in Rio, she's clearly already doing that.

Out of the six gymnastics gold medals up for grabs in Rio, Biles is a strong favorite to win five of them: the all-around individual, all-around team, balance beam, floor, and vault. Five of them. Biles, attending her first Olympics, is the great hope for Team USA thanks to the fact that she's won the last three individual all-round world championships. She also holds the World Championships record for most gold medals, with 10, won by a female gymnast.

What makes her wins even more impressive is that Biles' life didn't start out easy. She was raised by her grandfather after she taken from her mother, who was an alcoholic and drug addict, at the age of two. Biles has been fighting her whole life, and her hard work has paid off. She's a black woman dominating what is still an overwhelmingly white sport and sure to make that clear when she competes in Rio.

The 19-year-old Ledecky, the youngest member of the U.S. swim team, will compete in three individual events: the 800m, 400m, and 200m freestyles, along with the 4x200 free relay. As USA Today pointed out, Ledecky holds world records in the 400, 800, and 1,500 freestyles (the last of which is not an Olympic event). She has never (yes, never) lost in the final of a major international meet. If all of this wasn't impressive enough, she is the owner of the 11 fastest performances in the 800-meter freestyle and now swims the 800 an impressive eight seconds faster than she did four years ago. So, she could set a new record while she's in Rio.

It's already been predicted that Ledecky will sweep the 200, 400, and 800-meter and relay medal. The Wall Street Journal went as far to call Ledecky's dominance in the sport "absurd." Fellow swimmer Ryan Lochte even said he doesn't think Ledecky's reached her potential yet in the water, telling WSJ, “I think she’s just going to get faster. I guarantee in Rio everyone’s mouths are going to drop during one of her races. She’s going to do a time where everyone’s going to be like, ‘What the heck just happened?’” Definitely don't want to miss that.

Kalmoe means business. That was made clear by her recent quote in The Guardian about why Rio's sewage problem wasn't going to stop her from competing: “I will row through sh*t for you, America.” She started rowing in 2002 when she was in college and has been working for the last decade to make it to the Olympics; that's why she's sick of hearing about the water quality, which is admittedly poor. Scientists discovered that the water contains a drug resistant "super bacteria."

This is definitely scary, but Kalmoe just wants to compete and not have to focus on all the things wrong with these games. "My request to everyone who is fixated on sh*t in the water: stop," she wrote. "Stop trying to ruin the Olympics for us." I can't help but side with Kalmoe on this one. Let's not stop talking about the water, but let's definitely start rooting more for the most decorated women’s rowing squads in history.

Shields won the gold medal in London at just 17 years old, making her the first American woman in history to win Olympic boxing gold. This feat even had Hollywood calling; Universal Pictures bought the rights to Shields' life. But all Shields wants is to repeat her gold medal win again this year. With her 52-1 record, the Flint, Michigan native is the reigning Olympic and world middleweight champion. No surprise, since she has been known to intimidate people into throwing in the towel.

At the 2014 World Championships, Shields' first round opponent called the match 11-seconds in. But, since her win in 2012, things haven't been easy for Shields, whose father was in and out of jail and whose mother was a drug addict. Shields told The Detroit News that she had to split with her coach and reassess her future. "I had to take myself away from everybody who kept telling me what you should have and what you don’t have and what you should be doing and what you shouldn’t be doing," she told the paper. "I had to kind of step back and figure out who I wanted to be and how I wanted to be.” What she wants to be is a two-time gold medal winner.

Galloway will be the first heavyweight Taekwondo athlete to represent the U.S. at the Olympics. The 20-year-old native Texan won a bronze medal at May’s world Taekwondo championships that helped end a six-year medal drought for Team USA in the sport. Galloway has said she admires Ronda Rousey, who was the first U.S. woman to earn an Olympic medal in judo, and, if all goes right, she could be the first U.S. woman to win in her competition. But, Galloway told the Team USA website, that one thing you need to look out for is her weirdest habit before each match: "Putting on chap stick before I fight." Hey, proper lip hydration is very important.

At 38, Walsh Jennings is competing for her fourth gold medal at this Olympics. But it hasn't been an easy road to Rio, because Walsh Jennings had to overcome her fifth shoulder surgery while qualifying for the Olympics. She also teamed up with her new teammate April Ross after her previous partner, Misty May-Treanor retired after they won the gold in 2012. Even still, the beach volleyball player told USA Today that these challenges is "what life is all about, being challenged and expanding through challenges and learning about yourself through challenges.’’ Clearly, Walsh Jennings doesn't have a problem with a challenge. After dropping to No. 30 in the world, her and her teammate had to make it into the Top 16 to qualify for the Olympics. They're now No. 2 in the world. Yeah, look out for them.

Jorgensen is known as the world’s dominant female triathlete, but what she really wanted to be was an Olympic swimmer. Funny, really, since she is now the reigning two-time world champion and didn't lose a single race for the entire 2015 season. But not at all surprising, as SBNation reported, Jorgensen was the "MVP of her high school swim team and all-state in track." This woman was a born triathlete and is already the favorite to take home the gold when she competes on August 20. I suggest watching this one.

Felix, nicknamed "Chicken Legs" in high school, is the winner of four gold medals and is looking for her fifth when she competes in the 400 meters. She holds the fastest time in the world for the 400 sprint at this year’s U.S. Olympic trials. This was despite having a sprained ankle. Unfortunately, Felix was also looking to defend her medal in the 200, but placed in fourth, just shy of landing a spot on the U.S. team. Nonetheless, she has nothing to be disappointed about. Since 2004, she's managed to rack up six medals total, and, along with the 400, she'll have a chance to end up on the medal podium when she participates in the 4-by-400 relay for Team USA.

This will be Catchings' fourth appearance at the Olympics, and, in her past three, she's managed to take home the gold. In fact, the U.S. women’s basketball team is looking for its sixth straight gold as part of its 41-game Olympic winning streak. Yeah, these women are certainly dominating the sport. But the 37-year-old, who plays in the WNBA for the Indiana Fever, is looking to make a little history all on her own. As the WNBA points out, Catchings is hoping to join fellow female basketball players Teresa Edwards and Lisa Leslie as the only American basketball players — male or female — to earn four Olympic gold medals.

The team captain of the U.S. women's water polo team is known for her selfless style. As NBC reported, the defender, who was the youngest member of the team in London, scored 21 goals in her last Olympics, including five in the gold medal match against Spain, which earned her the MVP title. Steffens is hoping to get that chance again to defend that title in Rio — not to mention break a few records. Currently, she tied the Olympic record; Steffens scored seven goals in the Opening Match of the 2012 London Games water polo tournament. Watch and see if she can make eight when the Rio Games begin.

The women's soccer team is looking for its fourth consecutive gold medal, and this recent high school graduate is bound to help them get there. The 18-year-old is one of the youngest players to make the roster of a U.S. team, which makes her the one to watch this Olympics. According to the Wall Street Journal, look for Pugh, known for her exceptional speed, to cause major problems for any defenders on the wing.

These are just some of the ​female Olympians to watch in Rio. Think of this as a Cliff's Notes, but know there's going to be a lot more names to know once this historic games begin.