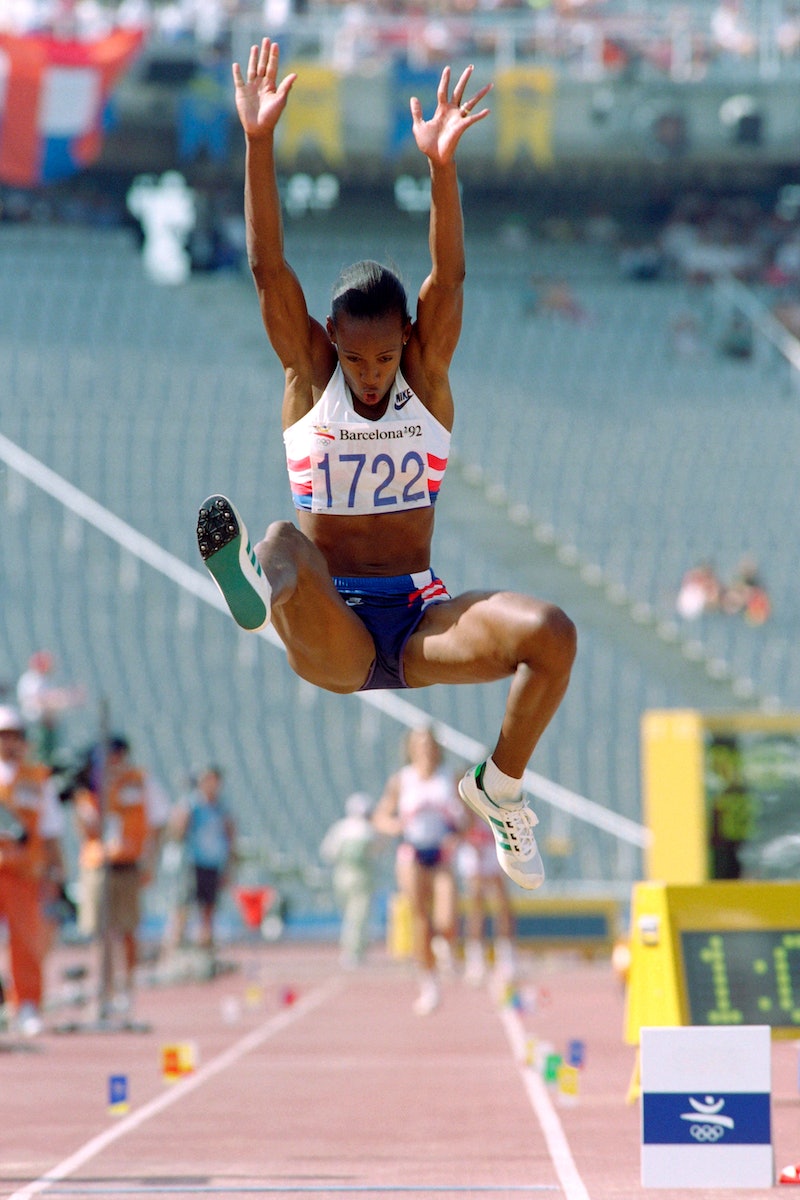 What does it take to be the best? Track and field legend Jackie Joyner-Kersee knows first hand the amount of hard work, determination, and "mental toughness" that goes into breaking and setting world records. The six time Olympic medalist — three of those gold — is heading to this year's Rio Summer Games to cheer the latest group of American track and field stars with her husband and former coach Bob Kersee (and current coach of Olympic hopeful Allyson Felix). In just a few days these athletes will set out to claim the gold, and perhaps demolish a few long-standing records along the way, so what does the Olympic legend think about the chance of her record being broken? Jackie Joyner-Kersee spoke to Bustle before the events kicked off to share her thoughts.

“I’m a realist. No one wants their record to be broken, but the reality of it is, that day is going to come,” Joyner-Kersee tells Bustle. During an Olympic career spanning 1984 through 1996, Joyner-Kersee has broken barriers in both the heptathlon and the long jump. At the 1988 Seol Summer Olympics she set an overall heptathlon record of 7291 points, which still stands 28 years later. "I think sometimes people say 'Oh these records can’t be broken,' but I look at Kendra Harrison, who just broke a 28-year-old record in the 100 meter hurdle. It will take the right athlete, at the right time, in the right circumstance." (Kendra Harrison did not make this year's Olympic team, but being the new title holder is a pretty good consolation).

For those of you unfamiliar with the Heptathlon event, it is a combination of seven, actually. The International Association of Athletics Federation (IAAF) describes it as the "ultimate all-round test, a seven-event contest covering the whole range of athletics disciplines and spread over two days... The first day consists of (in order): 100m hurdles, high jump, shot put and 200m. Day two comprises the long jump, javelin and 800m."

Joyner-Kersee knows that it is the type of challenge that can push an athlete to their limits. "It’s mind, body, and soul in one event; the heptathlon gives you all of it," notes Joyner-Kersee. "You go through so many emotional highs and lows. You can go from running your lifetime best in the world then to your worst in an event where you should do well. You’ll be on a high with tears, and then a low, blinking down and crying. But you have to find a way to let that go, because you have five other events that you have to do!" For multi-eventers, success may hinge on how well they manage these sudden emotional changes (and even changes in weather over the two days).

"For my training, we always worked from the aspect of ‘everything is going to work out’ which is always your ultimate goal. People are very positive when everything is going okay, and when all the sudden there is a little change, the attitude and the behavior changes — those are the things you have to work on," Joyner-Kersee tells Bustle. "You have to be able to adapt, to adjust. If all the sudden your body is aching and you are pushing through an injury, it’s most evident. They will tell you to stay positive, but it's hard to do that when your body isn’t responding like you normally want it to. That’s when you have to work on your inner strength and continuing to believe."

Joyner-Kersee, who travelled the world during her career as a competitive athlete, has talked to several athletes about to face the Olympic spotlight, and has come away with some simple advice: "They just really want us to be very supportive. They understand the situation they’re going into, but they'd rather hear someone say 'It’s going to work out' — because the fear is already there, and so to add to their anxiety or uncertainty isn’t fair to them."

Joyner-Kersee has her eyes on Team USA track and field stars Allyson Felix, and Brittney Reese. Reese, who recently beat Joyner-Kersee's U.S. Olympic trials mark for long jump that she set back at the 1988, may also have a shot at the world record (Joyner-Kersee holds the second-best mark). "I think she has the ability to jump 25 feet and I like to see people accomplish something that others think that you can’t," Joyner-Kersee added.

When it comes to her heptathlon scores, Joyner-Kersee is a touch more protective: "I always felt that my score 7291 really should have been 7400. So I feel that the right young lady is going to come around, and they’re going to do it. And it will hurt for a little bit, but it will be pretty awesome too."

More like this
Here’s Your Daily Horoscope For June 27, 2022
By Mecca Woods
Why You're Seeing Green Bandanas At Abortion Rights Protests
By Lexi Inks
YouTuber Runs Into Margaret Sanger’s Grandson While Filming
By Alexis Morillo
Are Cancer & Cancer Compatible In A Relationship?
By Kristine Fellizar
Get Even More From Bustle — Sign Up For The Newsletter