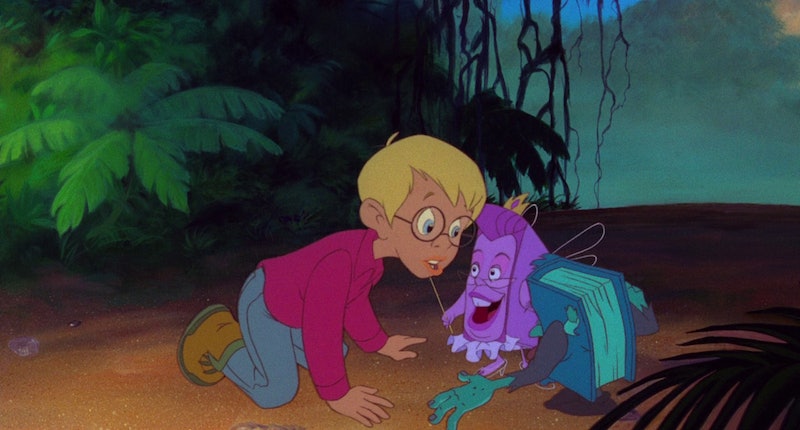 Movies are a staple of childhood, so it's no surprise that many millennials remember kids' movies from the 1990s with great fondness. The same cartoons and family films that entertained us as children now satisfy our thirst for nostalgia, taking us back to a time when one's biggest responsibility was just to rewind the VHS before putting it back in its weird-smelling plastic case. But although there are plenty of movies from the '90s that most everybody loves and remembers, there are even more that slipped by unnoticed despite the fact that they were awesome. Seriously, there are so many kids' movies from the '90s that should have been way more popular.

For example, everyone remembers Maculay Culkin in Home Alone, but what about his appearance in 1994's The Pagemaster? And all '90s kids loved the switcheroo story of The Parent Trap, but do you remember Mary Kate and Ashley Olsen's similar movie It Takes Two? Whether it was a matter of marketing, timing, or budget, there were way too many precious '90s kids movies that slipped under the radar. Here are some of the ones you may have missed, but you can make up for lost time by watching them now.

Both this movie and its sequel, Homeward Bound II: Lost in San Francisco, featured an amazing heartwarming story and an A-list voice cast.

This adaptation of the Roald Dahl novel was both creepy and highly underrated.

Remember that time Alfonso Cuarón made a children's movie? A Little Princess performed poorly in theaters, but received great critical acclaim for its cinematography and imaginative story.

This movie starring Macaulay Culkin was hugely creative and reminded kids about the magic of books, but sadly, it was a box office flop.

Anna Paquin and Jeff Daniels starred in this unique coming-of-age story (which is one of the first films that I can remember openly sobbing in front of).

Although remembered fondly by many '90s kids, this movie was actually panned upon release.

This 1993 film, based on the novel of the same name by Frances Hodgson Burnett, was totally charming— and featured Maggie Smith in a supporting role.

8. The Indian In The Cupboard

This film didn't even earn back its budget in revenue, but its story was simply enchanting.

9. The Wish That Changed Christmas

This 1991 made-for-TV Christmas movie was based on the children's book The Story of Holly and Ivy, and was pretty much the sweetest holiday story ever.

This story of a little cow who wanted to be one of Santa's reindeer was an underrated Christmas favorite.

This 1997 direct-to-video release was the forgotten Casper movie in between 1995's Casper and 1998's Casper Meets Wendy.

13. The Rescuers Down Under

This long-awaited sequel to 1977's The Rescuers was an underperformer at the box office, but in my opinion, it was as utterly endearing as the original.

This TV movie starring Kirsten Dunst was based on the famous Disney World ride, and it was so, so scary.

Alan Cummings provided the narration for this sad but ultimately heartwarming 1994 film.

This movie starring Nathan Lane received subpar reviews from critics, but its slapstick humor was on point.

Although not nearly as popular as Free Willy, this flick about another marine animal was equally sweet.

Another beautiful animated children's film with an environmentalist message.

This was arguably one of the best Mary Kate and Ashley movies, and with Kirstie Alley to boot.

Critics hated this 1995 comedy, but Jonathan Taylor Thomas was so cute in it.

This summer camp movie was poorly received in 1994 but has since developed a cult following.

Although these movies are lesser-known than many of the other flicks that you had in your videocassette collection as a kid, they are nonetheless '90s treasures. So watch one or more of these underrated movies the next time you want to take a trip down memory lane.