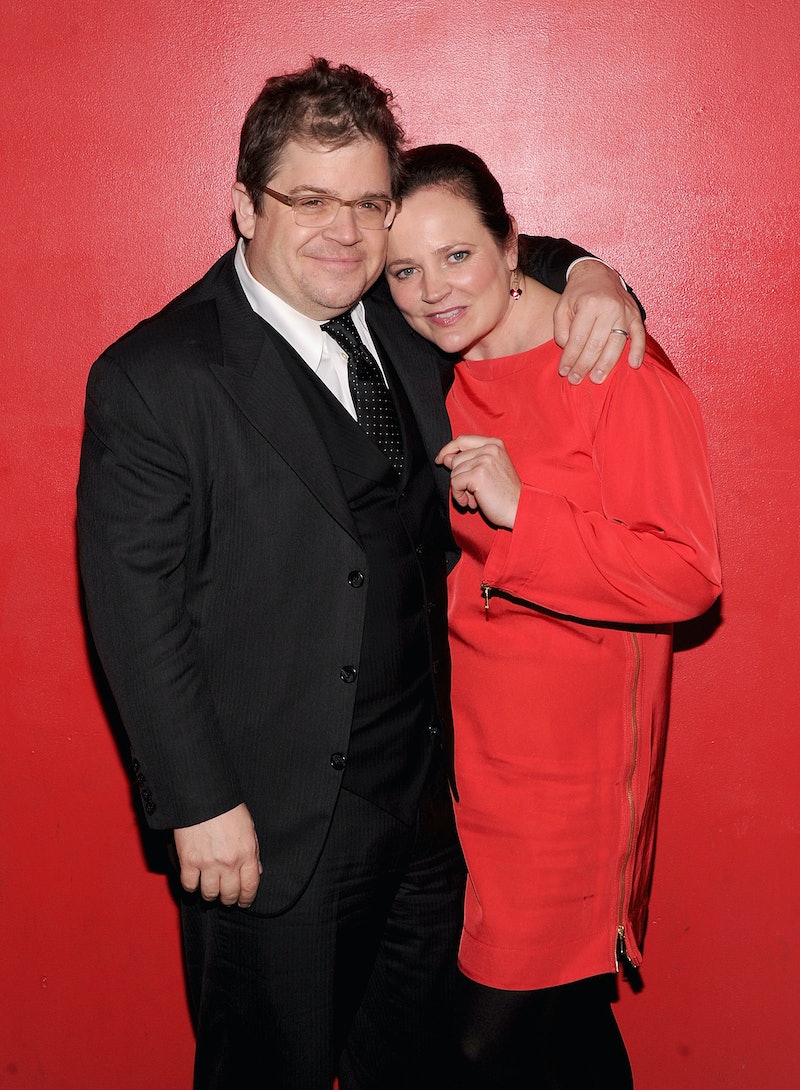 Grief isn't something everyone has experienced, and if you haven't, you should count yourself lucky. The grieving process comes with the loss of a loved one and it to put it bluntly, it can be nasty, horrible, and ruthless. Whether your loved one has passed away suddenly or expectedly, death is never easy and then here comes grief to give you a huge punch in the gut to make it even worse. In an essay posted on Facebook Monday, Patton Oswalt wrote about grieving his late wife. As someone who has experienced a heartbreaking death of a family member, I can attest that the comedian's letter will hit home for anyone who has also lost someone near and dear to them.

In April, Oswalt's wife, Michelle McNamara, died unexpectedly in her sleep at just 46. It's only been a short four months (or as he puts it, 102 days) since her death and the Veep actor misses his wife greatly. "Thanks, grief," is how Oswalt begins his powerful Facebook post. He then goes into detail about how cruel grief truly is and can be for many, including himself:

Thanks for making depression look like the buzzing little bully it always was. Depression is the tallest kid in the 4th grade, dinging rubber bands off the back of your head and feeling safe on the playground, knowing that no teacher is coming to help you. But grief? Grief is Jason Statham holding that 4th grade bully's head in a toilet and then f*cking the teacher you've got a crush on in front of the class. Grief makes depression cower behind you and apologize for being such a d*ck.

That truly is an interesting, yet accurate, way of describing how grief can make you feel. By no means do I understand what it's like to lose a spouse or fully comprehend what Oswalt is experiencing, but like him, I lost someone close to me unexpectedly. In 1999, my 16-year-old brother died in a car accident. His death certainly wasn't something myself, my sister, or my parents were anticipating. To say it sent waves through my family is an understatement. It changed everything, including us, and continues to affect us every day, despite it being 17 years later.

So, when Oswalt describes his grieving process, I can relate to it on so many levels. This particular part truly says it all:

But 102 days at the mercy of grief and loss feels like 102 years and you have sh*t to show for it. You will not be physically healthier. You will not feel "wiser." You will not have "closure." You will not have "perspective" or "resilience" or "a new sense of self." You WILL have solid knowledge of fear, exhaustion and a new appreciation for the randomness and horror of the universe. And you'll also realize that 102 days is nothing but a warm-up for things to come.

Isn't that the truth? After losing someone, grief makes you feel all kinds of emotions. The pain of grief can be unbearable, because there is no cure for it. You can't escape it. There is no immediate fix. There is a constant aching, emptiness, and hopelessness for what was and what is, not to mention the overwhelming anger and sadness from the death itself. You have to slowly work through the grief in a way that is best for you, attempt to come to terms with what your life has become, try to live, breathe, eat, sleep, and wake without your loved one by your side, and then live with that grief for the rest of your life.

Yes, the rest of your life. It never goes away. Does it get better? I hate to use the word better, but it becomes different in a way that you can function, genuinely be happy and smile without feeing guilty about it, and get through the day without the grief weighing so heavily on you that you can't put one foot in front of the other.

Oswalt is in the early stages of grief, which he recognizes. "I was face-down and frozen for weeks," he writes. "It's 102 days later and I can confidently say I have reached a point where I'm crawling. Which, objectively, is an improvement. Maybe 102 days later I'll be walking." Eventually, the grief dissipates to a thin layer, but as Oswalt points out, it's always there tapping you on the shoulder making your life a little bit harder than it already is without your loved one alive.

Grief isn't easy to talk about or explain to someone who has no idea what you're going through, so I'd like to thank Oswalt for putting his grieving process out there in the open. Not only is it brave, but it's something that is going to help others who have also experienced death on a similar level as Oswalt. When it comes to losing someone, it's good to know that there is someone else you can relate to and who understands your feelings. It makes grieving a tiny bit easier.