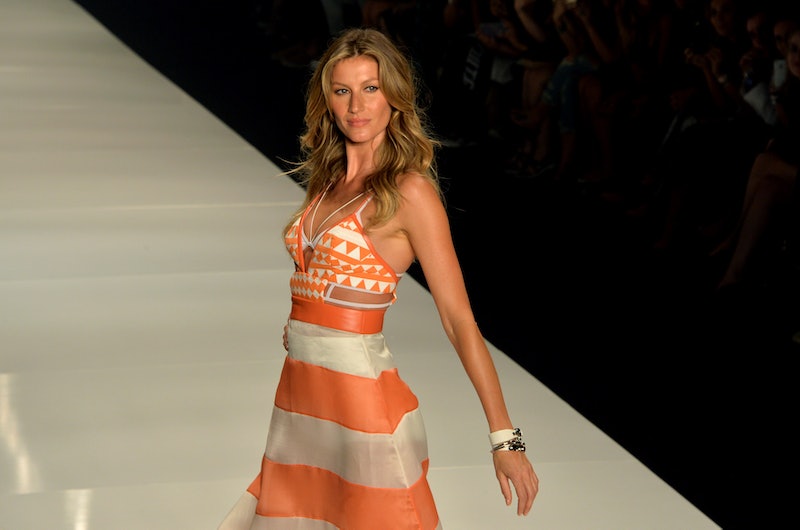 When the highly-anticipated and sure-to-be spectacular 2016 Olympics Opening Ceremony take place in Rio de Janeiro this Friday, viewers around the world will be treated to the sights and sounds of the Games' host country, including "tributes to the rainforest, Brazil’s famous Carnival, and the country’s love of sensual dance and the female form," according to The Daily Mail. More intriguingly, The Daily Mail also reports that the Opening Ceremony will also feature world-famous supermodel Gisele doing a performance to the tune of "The Girl From Ipanema." But who is "The Girl From Ipanema" exactly, and what is her connection to Gisele?

Most people know the bossa nova song in question — even if they can't name it — whether from the original 1964 single by Stan Getz and João Gilberto, from one of its hundreds of covers over the past 50 years (making it the second-most-recorded pop song in history after The Beatles' "Yesterday"), or even from just standing in an elevator for any length of time. But what most people don't know is that "The Girl From Ipanema" is actually a real person.

Written in 1962 by composer Tom Jobim and lyricist Vinícius de Moraes, "The Girl From Ipanema" was inspired by a beautiful young woman the pair would watch and admire as she passed their favorite hangout in the affluent seaside neighborhood, as The Wall Street Journal reported on the 50th anniversary of the classic tune. She was "tall and tanned and young and lovely," as the song describes her — and her name was Helô Pinheira.

Then only 17 years old, Pinheria would walk by Jobim and de Moraes in the beachfront bar Veloso practically every day. "When they saw me, they would whistle and shout out, 'Hey beautiful girl! Come over here," Pinheira remembered in an interview with The Guardian in 2012. She paid the men no attention but, after the song became a Grammy-winning international smash hit, Jobim and de Moraes finally told her the truth about their inspiration. "I told them, 'I don't believe you. You are crazy. There are so many beautiful women here,'" Pinheira said. "But it was me."

She eventually became friends with the songwriters; Jobim even proposed to her — although she turned him down and married an engineer instead. As she told The Guardian, Pinheira still remembers those times fondly and treasures the song's legacy:

It's eternal. Whenever I listen, I remember my past, my younger days. Ipanema in 1962 was a great place. You never saw aggression. Everyone wanted to fall in love. It was the spirit of bossa nova — tranquil and romantic. Today, you don't see composers in the bars and restaurants. There isn't the same inspiration.

As for the woman who will be portraying her in the Opening Ceremonies — Gisele Bündchen was born in Três de Maio, a small town in the state of Rio Grande do Sul, which is a bit further south down the Atlantic coastline from Rio de Janeiro. The world-famous supermodel's Brazilian roots make Gisele the ideal choice to bring Jobim and de Moraes' legendary beauty to life.