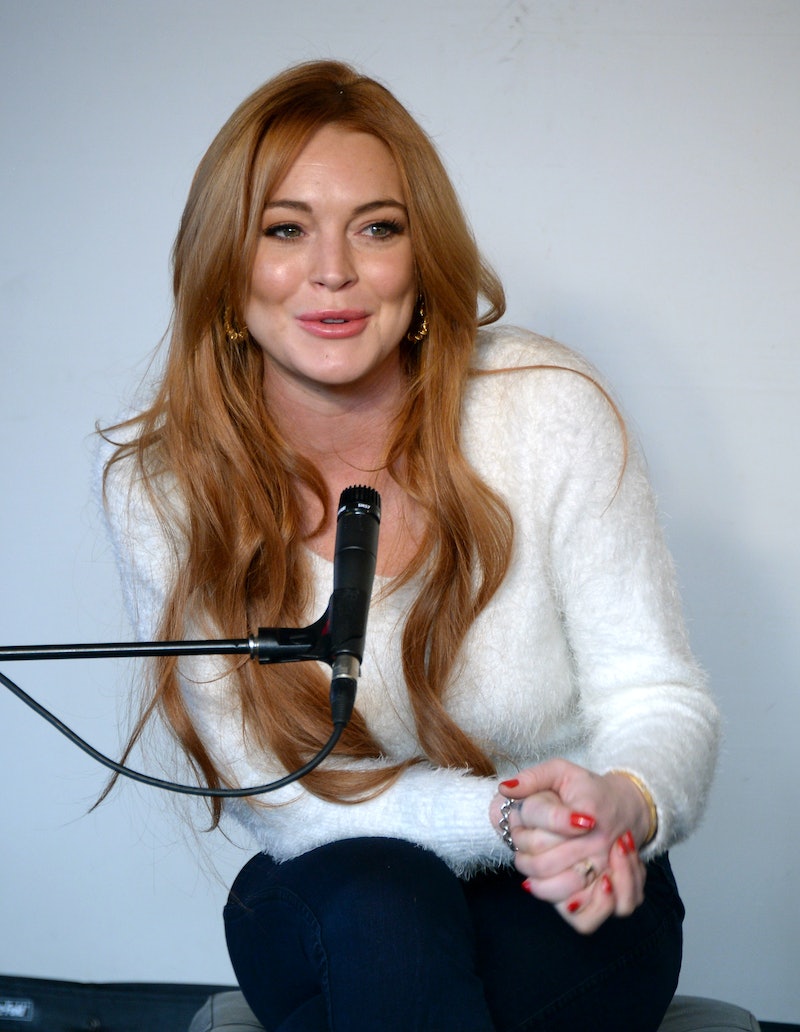 The first installment of the docu-series you've been waiting to hate-watch is HERE, and it boldly requests your love and support. Lindsay has premiered, and it promises a lot — mostly because the entire episode is filled with its namesake starlet promising that this time will be different, which, at its best, sounds like good television — a promising build up, with the potential to disappoint the audience.

We know Linds, and we're poised to think she's gonna fail (also, the season's teasers demonstrate the fallen actress in tears as she sits in Oprah's hot seat). However, we SHOULDN'T BELIEVE THIS, as the entire episode was peppered with her most recent rehab alma mater Cliffside Malibu commercials which promise that when you attend rehab there, you only go once! (Maybe it will be a self-fulling advertorial philosophy!)

Oprah, mother of all things Honest And Real (yes, with caps), starts off the series, which has Amy Rice at the helm, asking Lindsay what her ultimate goal is...what her intention is. She says? "I just...want to be open. I want to be honest and me." So, Lindsay is on a path in which she cannot lie! Oprah is giving her an opportunity to heal (in front of cameras, no less).

Yet the entire episode, amidst a mini-reunion with Dina, Lindsay's failed apartment-hunting in NYC attempts (even celebs can't snag a home in NYC, apparently, uh, LOL at that one!) and now-ironic hopes of The Canyons becoming a critical and box office success, is filled with the same words coming from our not-quite-heroine. She's gonna be in control! She's learning to be calm! SHE NEEDS A HOME TO BE A SANCTUARY! (Her words, not mine — hence why this apartment is so important. Please, Linds. WELCOME TO NYC. We all sublet, feel transient all the effing time, and schlep boxes o' tears. Congrats! You're a real person now!) HOW CAN SHE BEGIN IF SHE CAN'T EVEN START!?

We keep hearing she's gonna turn shit around, yet there's little action. It's like she needs this apartment in order to jump start her life, and no sober coach, no personal assistant, no retail therapy, no check-in with fashion model sis Ali, and no visit with Mama Lohan will cure this. Apparently, this apartment will set the wheels in motion for truly starting over in a life of sobriety. In a hilarious (if you like schadenfreude, and whoops! I just might) breakdown on the phone with — wait for it — her real estate agent, she likens her mother-effin' BROKER to her daddy issues (she can't trust anybody!!), proving that her emotional stability is so far from this promise of change that she keeps saying is so imminent.

It's quite the start for the eight-part series, and we've got a lot to look forward to. Like, will she get her shit together? Will this time really be different? It seems unlikely, as the doc consistently flashes back between her Golden Years (I'm talking Parent Trap, Freaky Friday, and Mean Girls — call them the holy trinity of Lohan movies, with Life Size counting as the pinnacle of her television career) and her less healthy looking, very much aged current self.

Now, I must admit, I am rooting for her. I do want her to get her shit together and have a healthy, happy Mean Girls reunion quote-fest and fulfill all the hopes and dreams that she bashed with car crashes and frequent rehab visits. Who doesn't? Here's an actress who was poised to be a huge success who went spiraling down, and now we can watch her either rebuild, or continue to crumble.

But it's like, Linds, if you're gonna promise stuff, you gotta bring it, and if Oprah can't help ya, who will!? I guess we'll have to tune in to the next seven installments of the series to see if Lohan can live up to all the promises she — and the Cliffside commercials — are making.