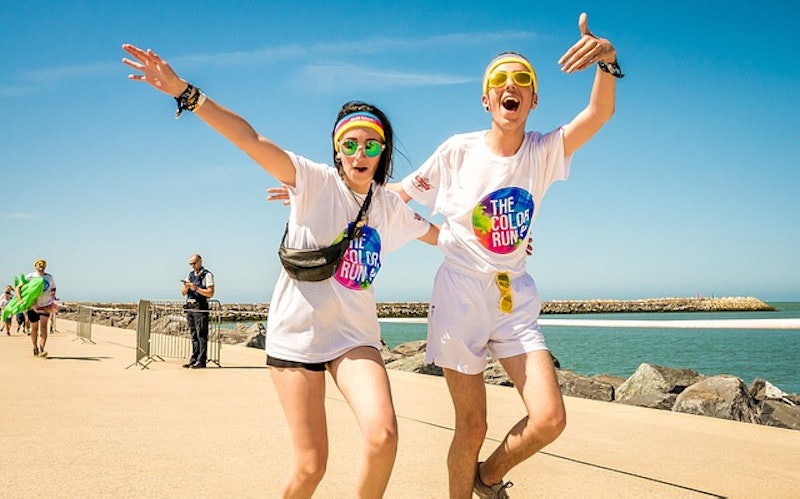 As a runner myself, I’ll be the first one to admit it: Runners are a rare and peculiar community of people. And I don’t just say this because our idea of "fun" (i.e., running miles and miles for our own personal enjoyment and fulfillment) is another person’s idea of punishment. I say this because there’s a whole Pandora’s Box of things only runners understand — and that non-runners find incredulous. From forgoing happy hour on Friday night in order to log some early miles on Saturday morning, to incessantly talking about what races we have coming up on the calendar, to regularly sharing social media updates about the status of our training, many habitual runner tendencies are not easily explained, nor understood, by the general public.

Of course, that’s not to say that every runner is the same. There’s many different kinds of runners, from the regimented runner who wakes up at 6 a.m. to push the pace, to the weekend warrior whose main motivator is the brunch waiting at the end of her route. Yet as a collective group, we often do and say a lot of things that generate eyebrow raises from across the board.

However, none of the above means that you can't get in on this trend, too! You'll just have to learn how to start running — and figure out how to identify with other runners, too. To help you get started, we've explained the reasoning behind seven weird things runners do.

Yes, really. And not because they’re chasing a whiskey shot! Many runners turn to pickle juice to eliminate and stop muscle cramps, which are better known as a runner’s nightmare. If you’re shaking your head and scoffing at this fun fact, the joke's on you: Studies show it works! In fact, certain companies like The Pickle Juice Company claim that the salty concoction is even more effective than Gatorade at combating muscle cramps — and can do so in just 85 seconds.

2. Lose Toenails On The Reg

There’s a reason why runners love their running sneakers so much: they can hide their black, bruised, or missing toenails inside of them! While it’s not fair to say that every runner has bruised or missing toenails, it is accurate to say that running increases your chances of having them. Most commonly, black, bruised and missing toenails on runners are caused by the repetition of shoes striking the nail with each step, or the toe sliding forward into the end of the shoe during a run. Don’t worry — it usually doesn’t hurt much, and the toenails do grow back. However, you’ll have to deal with the inevitable judge-y looks from your pedicurist.

As a general rule, you should never, ever talk about going number two while meeting someone for the first time, right? Well, not if you’re a runner. In that case, every and any bodily function topic is on the table when it comes to conversation topics, especially going number two. All that jostling of intestines that happens during a run can cause gastrointestinal distress, which, yes, often leads runners to the bathroom.

For runners, bodyglide isn’t just a fun tool to spice things up with a romantic partner. Instead, this kind of “lubing up” is a literal lifesaver, especially during longer runs. To prevent dreadful thigh, arm, and even nipple chafing, it’s not uncommon for runners to apply body glide to all potentially affected areas — and generously, I may add.

Not only are runners not shy about the specifics of their excrement, but they also aren’t afraid to drop their pants and, ahem, relieve themselves if the situation arises, whether or not there’s an actual bathroom around. While, of course, an actual restroom is always preferred, it’s not uncommon for a runner to get desperate enough to use any shrub or lightly wooded area off the side of the road as a makeshift Porta Potty.

For most people, vacations are a chance to relax, reset, and rejuvenate — ideally by lounging on a chair by the pool, or sightseeing aboard a tour bus. But for runners, “vacations” and PTO are often planned around a destination race or a cool and scenic running route. Or, at the very least, they plan their accommodations near to somewhere they can lace up their sneakers. I mean, when the opportunity arises to cross the finish line of the San Francisco Marathon or experience running along the Wildwood Trail in Portland, a runner will most definitely take it.

7. Know The Exact Mileage From Point A To Point B

While most people will approximate the length of one place to another in measurements of time — say, a 10-minute walk or 15-minute drive — thanks to a GPS watch or resource like MapMyRun.com, a runner can specify exactly how far it is from Point A to Point B. Want directions? You better be willing to get turn-by-turn instructions, along with the distance down to the tenth of a mile.

More like this
6 Abortion Advocates To Follow On TikTok
By Sara Youngblood Gregory
Lily Allen Was “Quite Emosh” After Performing Sober At Glastonbury Festival
By Stephanie Topacio Long
Here’s How Lizzo Is Supporting Abortion Rights After The Roe v. Wade Reversal
By Brad Witter
Olivia Munn Got Real About How Her Body Hasn’t “Snapped Back” Post-Pregnancy
By Stephanie Topacio Long
Get Even More From Bustle — Sign Up For The Newsletter