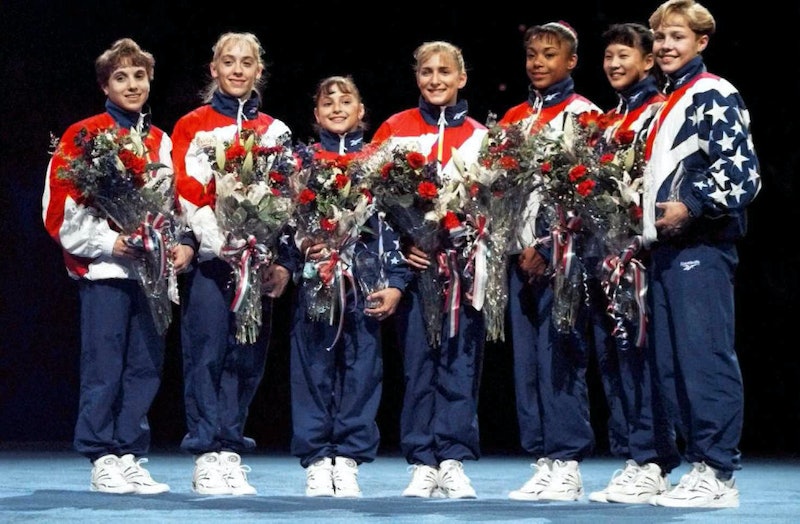 If you're a '90s kid, you probably remember the days when, if you wanted to watch the Olympics, you had to unplug the Nintendo, park your denim overalls in front of the television, and flip the channel to NBC. The Olympics were a must-see appointment, and everyone would be talking about last night's various events the next day. The most inspiring moments from the Olympics in the '90s taught a whole generation of kids, myself included, that any kid can become elite at something that he or she is passionate about with the right amount of practice and dedication.

Whether you were more into the summer or winter games, there was at least one moment that left you begging your parents for an official Team USA windbreaker. Personally, as a dancer, I was a huge fan of the darlings of the gymnastics world — The Magnificent Seven. Dominique Moceanu had the same haircut as me, and I can honestly say that watching seven regular young women confidently kill it at the 1996 Summer Olympics made me want to be absolutely great at everything I did.

I hope you brought your gym bag with you today, because I'm about to drop the most inspiring moments of Olympic excellence from your childhood, and you're gonna want to get in touch with your inner athlete.

A little over a month before the opening ceremony of the Lillehammer Winter Olympics, Nancy Kerrigan was attacked with a police club by associates of rival figure skater Tonya Harding. The idea, allegedly, was to break Kerrigan's leg so that she wouldn't be able to compete in the U.S. Figure Skating Championships or the upcoming Olympics. What Harding wasn't counting on was that she would be implicated in the plot, stripped of her championship, banned from the sport for life, and that Kerrigan would not only fully recover from the attack (she suffered a bruise but no fractures), but also go on to win the silver medal at the Olympics, pulling off what might just be the sassiest revenge-on-ice in the history of frozen water.

2. Derek Redmond Finishes Race With The Help Of His Father — 1992

Derek Redmond held the record for the British 400m sprint when he started the 400m sprint semi-final, but a little less than halfway into the race, his hamstring snapped (ow ow ow), and he fell to his knees on the track. Determined to finish the race, Redmond got up and started hopping toward the finish line when his father jogged up behind him and helped him finish the race.

Nobody knew who would light the Olympic torch in Atlanta in 1996 until the moment it was about to happen. As the flame made its way up a ramp, Muhammad Ali stepped out onto the platform, visibly suffering from the effects of Parkinson's Disease, but no less awe-inspiring to carry the flame to the cauldron.

4. Michael Johnson Smashes Basically All Of The World Records — 1996

Michael Johnson has only ever won gold medals —12 of them, to be exact, in the Olympics and World Championships. He doesn't really do second place. And in 1996, the only competition for Johnson seemed to be previously set world records including longstanding records and ones he set himself at the Olympic trials that same year. Johnson became something of an Olympic fashion icon when he donned shiny gold Nike spikes to get him from the block to the finish line and, ultimately, to the top of the medal podium.

In 1988, a few hours before his 500m speed skating event, Jansen got a call that his sister Jane had passed away. Though the 500m was his specialty and he held the five fastest times in history, he just couldn't shake a string of nerves or maybe just bad luck. In 1994, the 1,000m event was the final one of his Olympic career, and through the entire event, Jansen said he felt like it went in slow-motion. Though he wasn't even sure if he would win gold, he was relieved that he finally skated to his potential. His 1:12.43 was not just good enough for gold, but also for a world record at the time. He carried his daughter Jane, named for his late sister, to the podium to receive his gold medal.

6. Magic Johnson Returns From Retirement To Join The Dream Team — 1992

In November of 1991, Magic Johnson announced in a press conference that he had been diagnosed with HIV. Johnson ultimately decided to leave the NBA, but the basketball community wouldn't let its most popular guard fade into history in the prime of his career. Johnson was selected to the 1992 Olympic basketball team dubbed The Dream Team.

The Magnificent Seven and the United States needed a second vault from 17-year-old Kerri Strug to clinch the team gold medal over the Russian team. The problem was that Strug had injured her ankle and fallen on her first vault attempt. Coach Bela Karolyi reassured her, "You can do it!" She stared down the vault runway, took two deep breaths, sprinted, jumped, and finally landed perfectly upright, clinching gold for the USA.

More like this
Starbucks’ Chocolate Cream Cold Brew Tastes Like This Retro Candy
By Emma Garza
The Case For A Hard Launch Summer
By Morgan Sullivan
10 Eurovision Moments That Celebrate The Weird & Wonderful Camp Extravaganza
By Sam Ramsden
If Your Refrigerator Is A Mess, These 25 Organizing Products Can Help
By Courtney Young
Get Even More From Bustle — Sign Up For The Newsletter