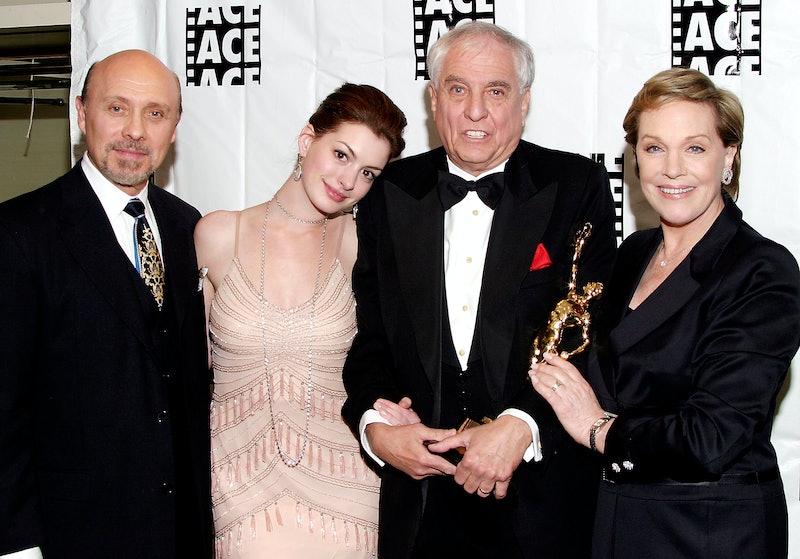 Aug. 3 isn't just any ordinary Wednesday, but a very special one. It is the 15th anniversary of The Princess Diaries, and there is one star celebrating the occasion in a heartfelt way. Anne Hathaway perfectly honored The Princess Diaries with an Instagram that will make you laugh, smile, and cry. Leave it to the Oscar-winning actor to stir up all kinds of emotions over the beloved film that still is a favorite of many. Alongside a gif of Hathaway as Princess Mia Thermopolis and Joe (Hector Elizondo), the star of the Disney hit wrote,

It's been 15 years (say it with me)SHUT UP!!!!!To all the fans who have loved Mia, Louie, Lily, Joe, Michael and, of course, Queen Clarisse, thank you from the bottom of my heart!And to Garry Marshall, thank you for making me a princess.I love you always my beloved friend and teacher, and I miss you every day xx

If you're getting a bit misty-eyed over that last part about the late Marshall, you're not alone. Without him, there would be no movie starring Hathaway as the beautiful, flawed, smart, and goofy Mia, and the 33-year-old actor recognizes that. After the director died at age 81 in July, Hathaway took to Instagram not once, but twice, to pay tribute to the man who brought so much into her life.

Actually, her second tribute included her Princess Diaries co-star, Heather Matarrazzo (she played Lily). "This morning, I got a text from Heather Matarrazzo saying, 'Of course Garry left on a full moon,'" part of her post read. "If you know Garry, that he went out when there should be darkness and instead there is full, rare, magic light, is too perfect to be coincidence. It’s so him."

Well, he certainly brought a lot of light into this world with The Princess Diaries. It's a film that fans will forever hold in their hearts. It really is hard to believe that it's been 15 years since it premiered. I was still in high school when it opened, which is absolutely crazy to think about.

It definitely left a mark on this world, including how fans will forever say, "Shut up!" Will there ever be any other way?