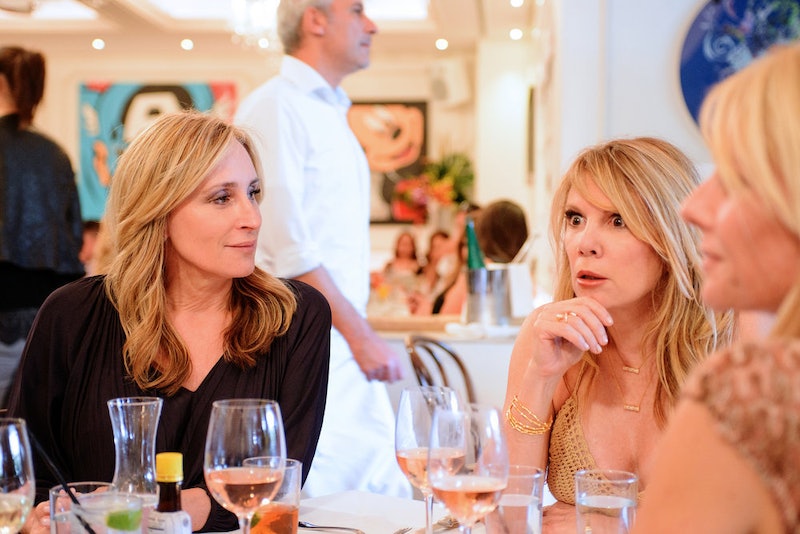 Well, if you thought that this Ramona-Tom-Luann-Sonja quadrangle on Real Housewives Of New York would be over soon, you’d be wrong. Luann’s engagement party in Palm Beach (of which the best part as Sonja saying that no important Palm Beach people were there) came and went, but the women are still talking about Tom’s timeline with Ramona. Of course, Luann and Ramona had another fight about Tom on Real Housewives Of New York , and there just will never be a winner here.

That being said (and I never thought I’d say this), I’m Team Ramona here. Know who I’m not? Team Dorinda. Ramona and Sonja were talking on the yacht a little more about who dated Tom (literally the same conversation we keep having), Dorinda goes up to have breakfast, and she rats on Ramona and Sonja and tells Luann what they’re talking about. Are you kidding me, Dorinda? Luann stormed downstairs to tell Ramona that she’d throw her off the boat if she didn’t stop talking about Tom. Then they talked a lot about what Luann said in the press, and I don’t know —I think I blacked out because of the inanity of the conversation. It literally never ends.

I genuinely believe that Ramona thinks she’s helping Luann by telling her about this stuff, but Luann is so blind in love that she thinks they’re jealous b*tches. Your friends, as stupid as they sometimes are, are just trying to stop you from making a mistake, Luann. At this point, Ramona should get the hint that Luann doesn’t want to be helped and give up the ghost. Instead, she can focus her energies on Sonja, who lost a lover (I hate when they use that word) and a friend when Tom got engaged to Luann. Ramona should help Sonja move on and let Luann make her own mistakes.