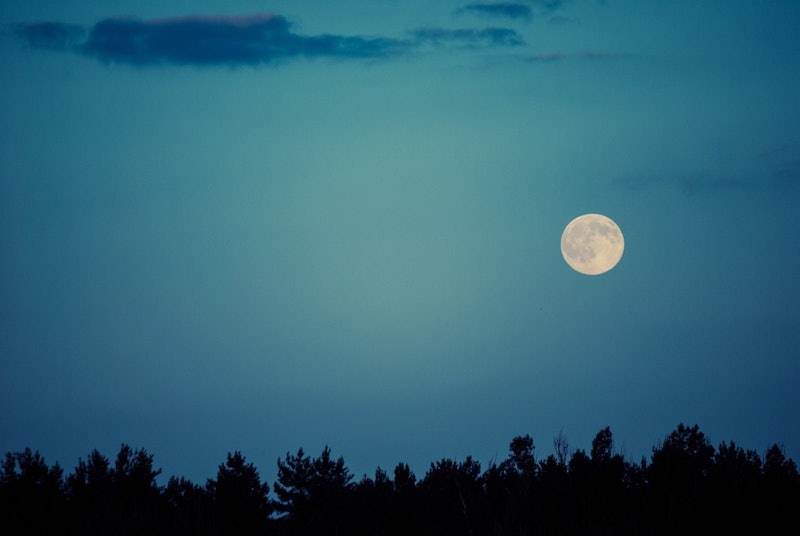 It turns out, though, that it's a tough question for the average person to answer, simply because we can't actually see a new moon. When most of us think we've spotted the new moon, it's technically a day or so before it occurs. But a legit new moon? The human eye just can't see it, and for several reasons. It rises, crosses the sky, and sets with the sun, making it too close to the glare of the sun for us to see. In addition, the side of the new moon that's actually lit is completely facing away from us (so, we're literally in the dark).

What does this mean for the amount of time the new moon spends in Leo? Unbeknownst to many, each phase of the moon only lasts for a short-lived instant! But to us little guys on planet earth, the phases can appear to last for a couple days. This means that when the new moon was in Leo August 2, it was likely just for that one day — maybe it lasted through August 3. Maybe.

Some people report feeling different during a new moon; and with Leo, it makes perfect sense. Leo is the sign that loves to be in the spotlight, so you can bet that the lion is making itself known this month. The new moon might've brought you a surge of ambition and creativity. Maybe you started a new project or set new goals for yourself. Leos are known to chase after what they want. The lion, after all, is the king of the jungle. Just make sure to keep your confidence in check!

The next new moon is on Sept. 1, at which point it'll be in Virgo. However, there's also another big event scheduled to happen that day: A solar eclipse. Solar eclipses can only happen on a new moon; astrologically speaking, they're also times of change. So, you know, brace yourselves — something big might be on the horizon.

More like this
How To See The Lunar Eclipse On May 15-16, 2022
By Kaitlyn Wylde
Here's Your Daily Horoscope For May 24, 2022
By Mecca Woods
4 Things To Do & 3 To Avoid During May’s New Moon
By Brittany Beringer
Are Gemini & Gemini Compatible In A Relationship?
By Kristine Fellizar
Get Even More From Bustle — Sign Up For The Newsletter