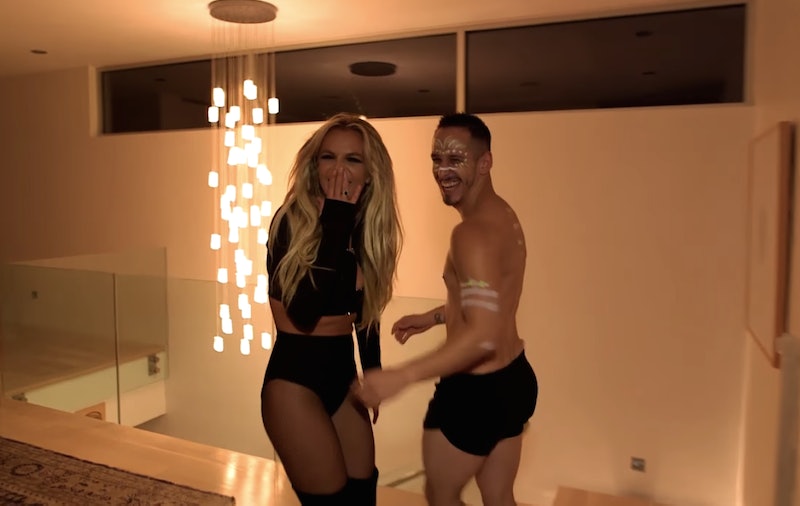 Britney Spears is full of pleasant surprises right now. If she isn't nonchalantly releasing one of the best songs of the Summer ("Make Me"), then there's the announcement that Glory, Britney's new album, finally has a release date (August 26, y'all!). Like, seriously — pop a bow on her, because she's the gift that just keeps giving. Her clear generosity to the universe continued on Wednesday night, when she made an unforgettable guest appearance on The Jimmy Kimmel Show. There, Spears pulled the best prank on Jimmy Kimmel, ever. Honestly? It kind of even made me totally jealous.

With the sacred permission of Kimmel's wife, Spears and her troupe of shirtless backup dancers (I salute you, sirs) sneaked into Kimmel's bedroom in the middle of the night and woke him up with an impromptu, saucy performance of "Make Me." Notorious prankster Kimmel got a taste of his own medicine when dancers started gyrating in his sleepy, startled face, and a giggling Spears started writhing around on his bed besides him. This is surely the stuff of dreams, right?

There was even a guy wearing a body vest of tinsel and a disco lighting rig to help set the mood for the hilarious performance. And that's commitment right there, guys. Nobody wants to be a human disco ball, though I'm sure we all would be if this pop star asked us. Treat yourself to some joy by watching the outstanding prank.

I don't know how watching that prank made you feel, but it made me instantly wish there was an 1-800-number I could call so that I could order myself my very own Britney-Gram. I mean, just take a second to imagine how wondrous that would be — the ultimate, heartfelt gift from yourself, to yourself (you're worth it, girl). Having dating troubles? Spears could sweep by with a shot of tequila and an encouraging rendition of "Toxic." Got a big day in work coming up and need some middle-of-the-night pep to help you through it? Spears could hustle forth a latte and perform "Work B*tch" for you, all from the comfort of your own bed.

In fact, there'd be no end to how useful a Britney-Gram could be. You could use it to stealthily and sassily break up with a no-good partner (surely nothing could say, "We're done" better than Spears waking your soon to be-ex up with a stirring performance of "Womanizer"?). Or, hell, why not dial a Britney-Gram to help propose marriage to your one-and-only with an impromptu rendition of "Born To Make You Happy"? This business idea has legs to it, people. Have your people call my people, eh, Spears? Cool.

Well, we can but dream. Until that beautiful, impossible day when the pop star decides to start making impromptu house visits at fans houses, we're all just going to have to make do with our usual shrines of Spears worship; A nice tall glass of pinot grigio, a blasting sound system, and Spears' entire discography pumping through our apartments at a sufficient volume. It's no Britney-Gram, but it's still pretty dreamy.