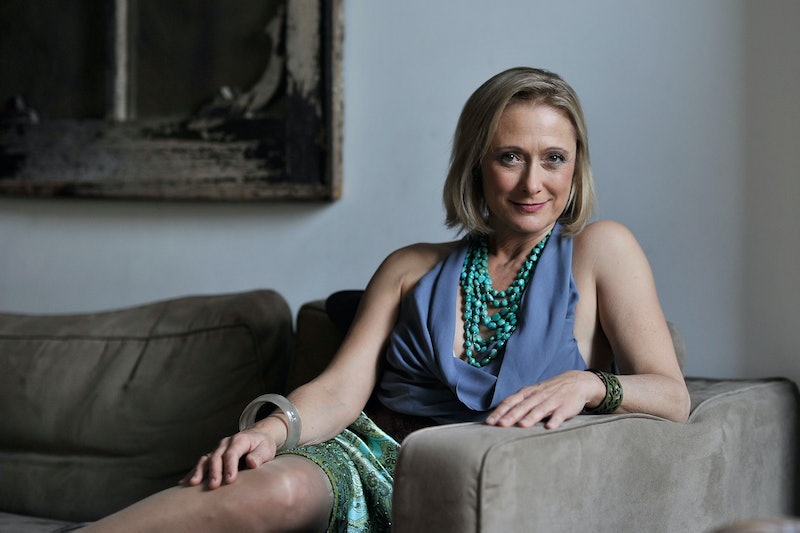 When we think of The Princess Diaries, we tend to think of the best makeover montage of all time, crazy-mean girls who also sing, and, of course, Julie Andrews as Clarisse, Mia Thermopolis' (Anne Hathaway) stern-but-totally-lovely paternal grandmother. The Princess Diaries may be about Mia's journey to find out what being royalty really means, but it also is about discovering the meaning of family — and Clarisse isn't the only family member who totally has Mia's back. Actress Caroline Goodall gave us total #parentinggoals with her portrayal of Helen, Mia's awesome artist mom who pops paint-filled balloons and converted an old firehouse into the coolest loft ever. While we may know what Hathaway has been up to since The Princess Diaries, what has her Princess Diaries mom been doing since her painting days? Here's what we know.

Though you may not recognize Goodall's name right off the bat, you totally know this actress from a bunch of beloved movies. She starred in Hook opposite Robin Williams as Wendy's daughter (and Peter's wife) in 1991, and in 1993 starred as Oskar Schindler's wife who, along with her husband, helped save hundreds of Jewish lives during the Holocaust in Schindler's List in 1993. So what other notable roles has she taken on after The Princess Diaries in 2001? Though this actress has a long resume, here are some notable parts:

Goodall reunited with Princess Diaries actress Mandy Moore, in which she played First Lady of the United States and mother to a rebellious First Daughter. Check her out at the 0:27 mark.

The Princess Diaries 2: A Royal Engagement

How could I leave the Princess Diaries sequel off the list? Goodall reprises her role as Helen in this movie as Mia attempts to find a suitable suitor to help her take over the throne of Genovia.

Goodall played Mrs. Parker in this darkly comedic take on suburban life. You can see her in the trailer above at the 1:59 mark.

Before he was the titular superhero in Kick-Ass, Aaron Taylor-Johnson played a kid on a magical quest through Venice. Goodall plays Ida, a friend who helps the gang of friends find their sought-after treasure.

Goodall had a role in My Big Fat Wedding creator Nia Vardalos' comedy about a woman who attempts to find herself via an extended stay in Greece.

The actress portrayed Duchess Cecily in Starz' historical mini-series about political turmoil in 1464 England. She will reprise her role in the follow-up series, The White Princess , out in 2017.

Goodall acts opposite Kate Winslet and Liam Hemsworth in this revenge comedy as the snobby Elsbeth Beaumont. Check her out at the 0:28 mark in the trailer.

Of course, no matter how many amazing roles Goodall has over the years, we'll always know her as the coolest mom ever to grace the big screen.