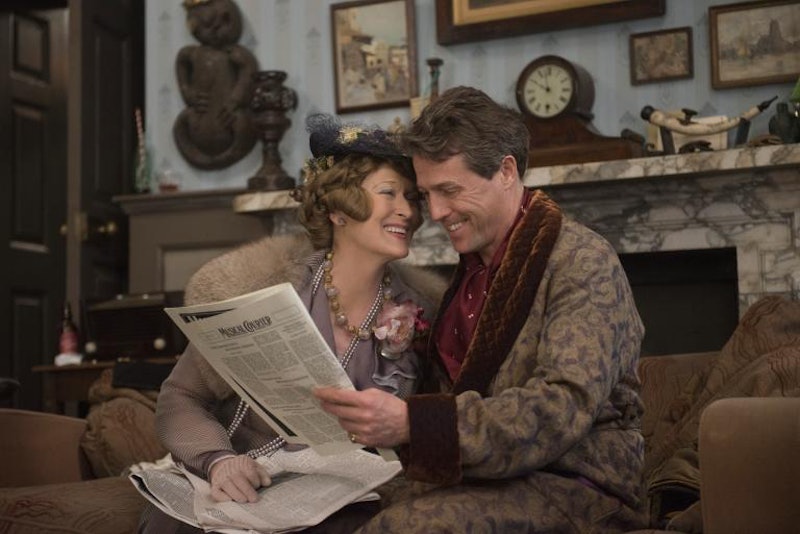 Meryl Streep and Hugh Grant star in the new dramedy Florence Foster Jenkins , a true story that premiered at the Belfast Film Festival in April but is working its way into US theaters on Aug 12. The movie is about a socialite named — of course— Florence Foster Jenkins, who dreams of being an opera singer and is able to gain entry to the New York stage because of her social status. But there's only one problem: Jenkins has absolutely no vocal talent, yet no one is brave enough to tell her the truth. It all makes for a fun and interesting movie, and it's even better knowing that it's a (mostly) true tale.

Jenkins was a real-life heiress at the turn of the century who pursued a career in singing despite having a voice that was absolutely not designed for opera. But even though she was laughed at for her vocal performances, Jenkins refused to absorb any of the criticism, and continued to produce recordings and appear onstage. In fact, it was only after reading scathing reviews of her big 1944 performance at Carnegie Hall that Jenkins realized what people really thought of her singing. Pacific Standardreported that the socialite declared, "People may say I can’t sing, but no one can ever say I didn’t sing.”

Florence Foster Jenkins highlights the fact that Jenkins lived for many years in the delusion that she was a supremely talented vocalist. She was supported by her manager (and supposed common law husband) St. Clair Bayfield, who allowed Jenkins to maintain her erroneous beliefs about her operatic talents. And the fact that Jenkins only performed for small, hand-selected audiences further enabled her to stay in her bubble, as none of these people provided harsh feedback the way that a critic at a public performance would have.

The film emphasizes Bayfield's attempts to support Jenkins and protect her from the truth. It also has a storyline about the conflict felt by her pianist Cosmé McMoon, who accompanies Jenkins onstage even though he is painfully aware of how bad her singing is. But for star Meryl Streep, the most fun aspect of the film was capturing Jenkins' desire to be truly talented. Streep told The Upcoming, "What was sort of wonderful about her was how close she came to being good...it was the attempt, the sort of yearning for it to be good."

Sadly, Jenkins' story did not come with a happy ending: she had a heart attack shortly after her notorious Carnegie Hall performance, and died a month later. But Florence Foster Jenkins highlights not just the socialite's poor singing, but also her determination to live her dream. Therefore, Jenkins is immortalized in a way that recognizes both the absurdity of her situation and her unstoppable spirit.