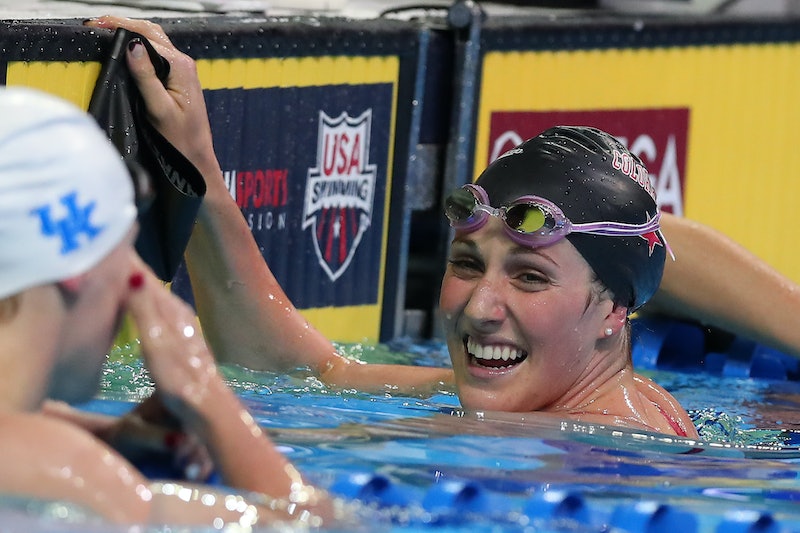 I don’t watch swimming when it’s not an Olympic year — I’m not sure I care enough to seek out every qualifying event for the U.S. swim team (sorry, you guys). But at the Olympics? Swimming’s number one fan. From Phelps to Franklin, I’m watching every member of the team in every race. And, speaking of Missy Franklin, I’m super psyched to watch her chances at the 2016 Olympic games in Rio. How many medals will she get this time? Will she break any more records? Will Missy Franklin be at the opening ceremony? She’s medaled so many times that she definitely deserves to be a part of the festivities, but it appears that fans won't be able to catch a glimpse of the swimmer this time around.

There are so many questions and so few answers until she gets in the pool. Franklin is only 21 years old, and she’s already on her second Olympics team. According to her USA Swimming bio, she holds both world and American records for the 200m backstroke, as well as a U.S. Open record in the same race. According to NBCOlympics.com, Missy Franklin was the first U.S. female swimmer to compete in seven events in one Olympics: London in 2012.

She won four gold medals there, and one bronze. She finished fifth in the 100m freestyle and fourth in the 200m freestyle, but hey — no one is perfect. That was when she was 17. I was barely athletic enough to walk down stairs then.

She obviously still has the skills to compete, but here’s where it gets tricky in Rio — according to NBCOlympics.com, Franklin is a newly-professional athlete (no longer classified as an amateur, that is), and, because of her sponsorship obligations, she can only compete in a maximum of three events. That means she can’t get five medals this time around, and it probably ups the pressure to be her best since she’s only in three events.

Franklin will really have to give it her all in Rio if she wants to match the domination she achieved in London. In light of that, it's no wonder that she skipped out on the opening ceremony. Hopefully, she's catching some sleep instead.