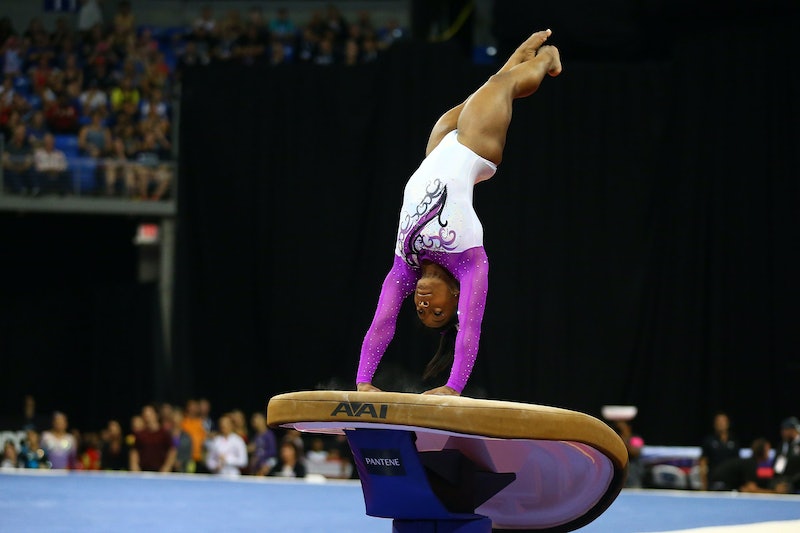 The U.S. women's gymnastics team is poised to win at the Rio Olympics again. The team — Gabby Douglas, Aly Raisman, Madison Kocian, Laurie Hernandez, and Simone Biles — is heavily favored to come home with gold, giving the U.S. women's Olympic gymnastics team their second consecutive all-around team victory — the U.S. women's team won in London, too. So, how has the American women's team become such a dominant force in gymnastics? Well, it all may come down to one move: the Amanar vault. Yes, the famous Amanar vault could score the U.S. Olympic gymnastics team a win. Throughout history, there's simply no team that has performed the move better. With the Olympics beginning on Friday, it's about time for everyone to know what the Amanar vault is, even those of us who don't spend our days doing back handsprings or front tucks.

According to Vox, the Amanar is a vault that begins with a back handspring and includes a layout with two-and-half twists — it's arguably the most important skill in women's gymnastics today. The move is named after Simona Amanar of Romania, who first performed the move at the 2000 Olympics, helping her team bring home the gold. At the London Olympics in 2012, Mckayla Maroney performed the Amanar almost perfectly, helping the U.S. team win the all-around title — Jordyn Wieber and Gabby Douglas performed the move, too. This year, the American team will likely use the Amanar to win again.

There are three members of the U.S. women's team who can pull off the rather breathtaking move during competition. That's right, according to Vox, Aly Raisman, Gabby Douglas, and Simone Biles can all perform the Amanar. In fact, Biles performed a practically perfect Amanar at U.S. nationals last year, and is considered the preeminent gymnast today partially because of her near-perfect execution of the move.

So, watch for the Amanar in Rio because it could be the reason the American women take home the gold — or at least the reason why the U.S. team will be so difficult to defeat in Rio.

Obviously, anything could happen in the women's team all around finals on Tuesday; however, the Americans are slated to win — in a large part thanks to their skills at the Amanar. It's the move that helped them bring home the gold from London in 2012, and it just might be the American team's key to victory again in Rio.

More like this
'Harry’s House' Is Inspired By A Japanese ‘70s Pop Icon & TikTok Fave
By El Hunt
Jake Daniels Just Became The UK’s First Active Football Player To Come Out As Gay Since 1990
By Sam Ramsden
Chelsea Woody On Shattering Stereotypes In Surfing
By Leah Groth
What Is Jeanie Buss' Net Worth? The Lakers President Is Uber Rich
By Hugh McIntyre
Get Even More From Bustle — Sign Up For The Newsletter