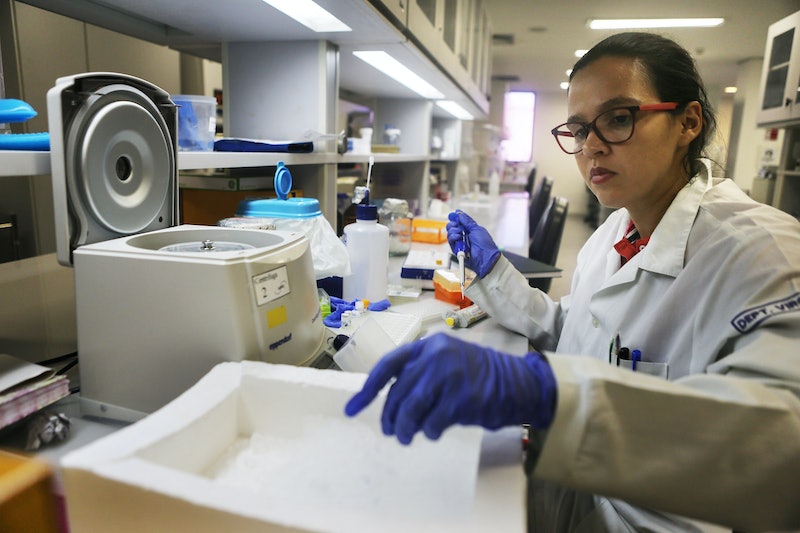 Sexism in STEM fields can take many forms — including, it turns out, unequal access to funding. According to a new study, women researchers applying for NIH grants are held to a higher standard than men are when it comes to having the research funded. It's a bit like the old saying: "Women have to be twice as good as men to get half the credit."

In the study, which was published in Academic Medicine , researchers looked at over 200 grant renewal applications to the National Institute of Health from researchers at the University of Wisconsin, where the study's authors themselves work, including 153 applications that asked for funding. All applications were submitted between 2010 and 2014. The researchers used software to analyze the positive or negative words used in written evaluations of the application by NIH reviewers. What they found is that reviewers tended to be more positive in reviewing women's research, giving them 13 percent more praise on average — but they also scored women's proposals an average of four points lower, making them then less likely to then provide them with funding.

What's more, this phenomenon is sadly not something that's unique to STEM fields. Plenty of women are familiar with the experience of needing to go above and beyond to prove ourselves while men around us are just assumed to be competent.

It's possible that this study isn't representative of NIH grants awarded nationally, but if it is, this double standard is a problem for multiple reasons. For one thing, getting an NIH grant, and having it continue to be renewed every few years, is important for researchers' careers. Getting funding for your research is an important step in being able to, you know, do research. If women are less able to access NIH grants, therefore, it becomes a problem — especially since women are already underrepresented in the sciences.

There's also the fact that if researchers are disproportionately likely to get funding if they are men, it skews the sort of research that is conducted. People are more likely to investigate things that appeal to them, which in turn are typically issues that are relevant to their lives. If women aren't represented among researchers, research on issues affecting women will likely progress much more slowly.

"We’re all bombarded by messages telling us that men are strong and more logical than women and women are kind and more compassionate," said Anna Kaatz, the study's lead author. "Because fields like science and medicine have been traditionally dominated by men, competence and ability in those fields are linked to male-type traits." And as such, there may be an unconscious bias against women in the field.

Hopefully, as time goes on, that will change. In the mean time, though, props to all the badass lady scientists continuing to push on despite the odds.

More like this
How To Fight For Reproductive Rights, Based On How Much Time You Have
By Courtney Young
Sandra Bullock, Girlboss Extraordinaire
By Matt Harkins & Viviana Olen
5 Crystals For Anxiety
By Megan McCarty
5 Crystals To Manifest Better Sleep
By Megan McCarty
Get Even More From Bustle — Sign Up For The Newsletter