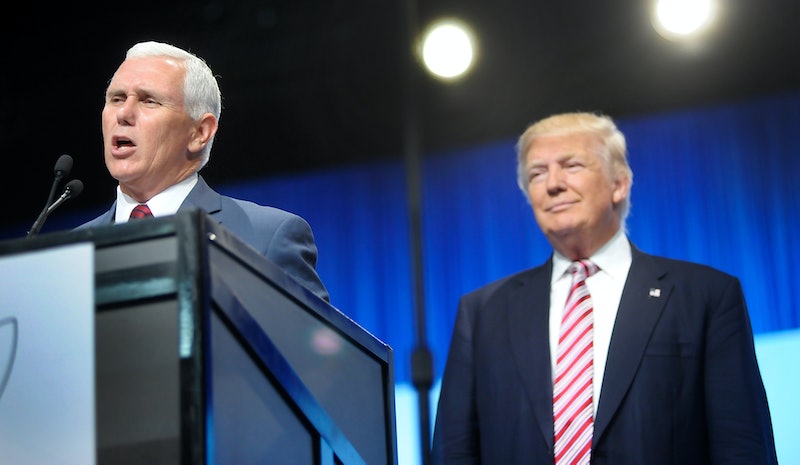 If there's one word that could not be used to describe this election cycle for Republicans, it would have to be "normal." Despite the many times Donald Trump promises to win in the November election, speculation has been swirling around the bizarre prospect of the GOP nominee dropping out of the presidential race. Though I might not drop my rosary beads yet (the prospect is far from expected), it might be worth considering would Trump be replaced by the GOP?

According to a report by Jonathan Karl of ABC News, a Republican legal expert advised party officials that "Trump would have to drop out by early September to give the party enough time to choose his replacement and get the next nominee's name on the ballot in enough states to win." How exactly would this new nominee be chosen? Rule 9 of the Republican National Committee's bylaws lays out the procedure. According to Leigh Ann Caldwell of NBC News, the new nominee could be chosen by reconvening all 2,437 delegates of the national convention and putting it to a vote, or, by allowing only RNC members to select the candidate, after a vote among their 168 members.

When looking at all the Republican fish in the sea capable of replacing Trump, one name floats to the top — House Speaker Paul Ryan. Ryan, whom Trump just recently refused to endorse in his primary race in Wisconsin next week, is the clear favorite child of the party establishment. Through April of this year, some Republicans fantasized about Ryan's late entry into the race, despite his assurances that he had no interest in running. A Republican source said of Ryan to Politico's Mike Allen in April, "He's the most conservative, least establishment member of the establishment," and "that's what you need to be."

Some conservatives may be disappointed to hear that Trump dropping out would not mean an automatic promotion for Mike Pence. According to the same Rule 9, Pence would still be running for the Vice Presidency since the RNC has already officially nominated him for the position.

In theory, if Trump drops out, the GOP could turn a to a number of possibilities, including former candidates like Texas Sen. Ted Cruz and Ohio Gov. John Kasich. But first, the party would need Trump to actually quit.