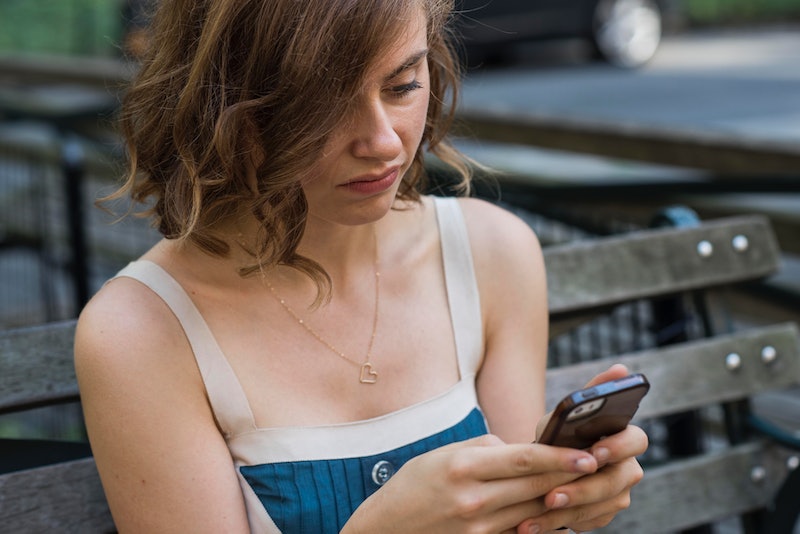 A new study out of the Oxford Internet Institute found that most dating app messages fail to generate a meaningful connection, or even a response, among straight users, prompting one researcher to conclude that most straight people treat dating apps like a game. In other words, surfing OkCupid is something folks do as mindlessly as scrolling through Twitter in line for coffee or firing up "Pokemon Go" on their morning commutes, not something people are utilizing with the goal of meeting someone in mind.

The study looked at 19 million messages between 400,000 heterosexual users on an unidentified dating app platform, and it found that almost half — 49 percent — of conversations were just one user messaging another to no response. Thirty-nine percent of all message exchanges were simply a single message from one user to another who didn't respond. Ten percent of conversations consisted of two or more messages from one user to another who didn't respond. (Pro tip: following up your bad opener with an "lol" will not redeem you.) Only 19 percent of messages in which both people were actually participating ended in an exchange of phone numbers and (presumably) a switch to text. Study author Taha Yasseri said to Motherboard in an interview:

"This is probably sad to some people, but reassuring to others who think there is something wrong with them because nobody is responding to their messages. It’s not you, it’s just a general trend. For some reason, people do not take these sorts of conversations too seriously."

Researchers think it's because men approach "swipe-based" apps like Tinder as a "numbers game." In other words, men swipe right on everybody and filter whether they'd like to talk to someone or not once they get all their matches in. Women actually do this filtering at the "swipe" stage (swiping left on people they don't want to talk to), so they're genuinely interested in their matches more often.

So if you're feeling hopeless about Tinder, try to remember that it's not just you. Half the swiping population isn't having any luck, either. Plus, men are gaming the system.